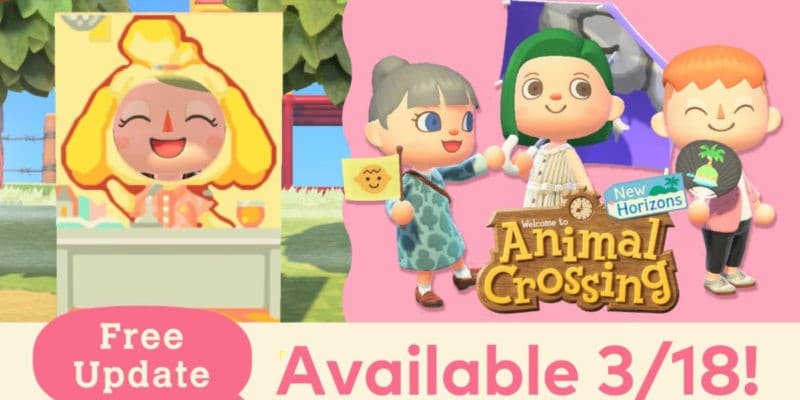 There’s no arguing that Animal Crossing: New Horizons has taken the world by storm. Up until recently, it was still number one in the UK game charts and it also broke the sales record in Japan last year. The game managed to arrive at a point when we all needed something different to occupy our minds. In fact, an Oxford study proved that the Switch game improved and uplifted player’s wellbeing. So now, as we come up to the New Horizons‘ first anniversary, and we say goodbye to winter and say hello to spring Nintendo has a reason to celebrate.

Nintendo has a lot in store for Animal Crossing: New Horizons players, as villagers can expect the following spring-themed content and updates to arrive in the near future:

As you can see Nintendo isn’t holding back with New Horizons updates, villagers can expect to get their paws on some of the content on March 18th. As well as content arriving in the following weeks.

The update will start off the AC: New Horizons anniversary celebration with a free anniversary cake from Nook Inc. The item will be available in the players’ mailbox, don’t eat it all at once.

In collaboration with Sanrio, New Horizons will be featuring Sanrio-themed furniture based on Hello Kitty, Cinnamoroll, and Pompompurin. Additionally, players will be able to use any of the six amiibo cards that were included in the previous Sanrio collaboration pack to invite some unique residents to move in!

The next part of the update adds four new Pro Design Styles and an additional 100 slots to store designs. 50 in Customs Designs and 50 within Pro Designs respectively. This allows players to create even more crazy patterns and designs. Furthermore, the update will allow players to access and surf through millions of custom designs from anywhere on the island.

Nintendo Switch Online members will get access to an exclusive Nintendo Switch Lite as an in-game item. This is as well as a crisp limited edition silk rug available from Nook Shopping.

Following the update on March 18th players can look forward to more content arriving in the upcoming weeks, such as a stream of new limited seasonal items available at Nook Shopping and Able Sisters. Don’t miss out on getting your hands on these brand new items:

Along with these additions, Nintendo has made a slight change to NookLink. As players will now be able to earn Nook Points and trade them for in-game items. That’s not all though as villagers will now be able to show off their incredible island in a much easier way. Nintendo will be implementing an Island Tour creator on March 24th. Allowing players to take screenshots to create digital posters. Players will even be able to edit highlight videos of their islands.

Bunny day is a limited time event that will begin on March 28th and will plant hidden eggs all over your island. Make sure to collect these eggs to trade them with Zipper the Bunny Day special guest to receive DIY recipes. Unique Bunny Day-themed items will additionally be available at Nooks Shop.

Are you excited for Animal Crossing: New Horizons‘ first anniversary? What part of the update are you most looking forward to? Let us know in the comments.

If you enjoyed this article, why not check out our other work. How about our interview with indie developers Out of Tune Games! There’s also List Of PC Games Arriving On Xbox Games Pass This Month. Or take a look at our latest feature: The Risks of Pre-Ordering Games.