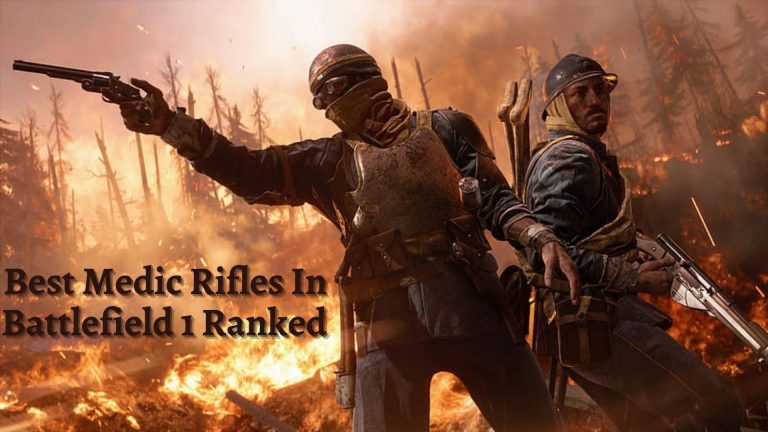 The Battlefield series has achieved its magnificent stature with not just its great gameplay, but also with the attention to detail and plenty of small mechanics and quirks introduced with every game. The class system in various Battlefield games is one of the hallmarks of the series. In some entries, it has been inherited and stayed the same, while others have a unique class system of their own. Nevertheless, every Battlefield fan recognizes the medic class as the most fun to play in any of the games. But it is Battlefield that mastered this class and showed its true potential. The medic class with its unique collection of weapons deserves a nice tier list for the best medic rifles in Battlefield 1 to be ranked.

For more such weapon rankings, check out our tier list of the best sniper rifles in Battlefield 1.

Just like weapons from other classes, medic guns also come in several different variants. These may be trench, optical, factory, marksman, sweeper, etc. In this guide, we rank the best medic rifles in Battlefield 1 as we look at their stats, in-game performance, the different variants of every weapon, and the viability of these guns in various situations. With these criteria in mind, we have ranked the following 8 guns as the medic rifles in Battlefield 1.

The Autoloading 8 is a semi-automatic rifle that comes in two variants, that is .35 and the .25 extended variant. It is important to mention the variants of this weapon, as they significantly change the in-game performance of the gun.

The .25 variant has only 5 bullets in a single magazine. It does have damage of 42 up to 51 meters, which means a 3 shot kill within this range. But the catch is that with only a 5 bullet magazine, u need to make every shot count. And then again, on missing you have to go into a reload. This means that you can only kill one enemy with a single magazine before reloading. The damage drop-off at higher ranges is not the worst thing, for most fights take place at a medium range.

The .35 extended variant is where this gun excels. The extended mag gives a 16 round chamber that allows you to take down multiple enemies at a time. It does damage of 38 at up to 16 meters only. This is because of the smaller caliber of the bullets in this variant. However, with a bigger magazine, you can have a go at enemies and not care for running out of ammo. It has to be said that the .35 is for players who like to tap and have good trigger discipline. Whereas, .25 works better for a spray and pray type of style.

Both the variants have a good bullet velocity of 600 m/s and a low bullet drop. Both variants have an average reload speed. In most situations, .25 is the better and the more viable weapon to use. The number 8 spot is justified for the Autoloading 8 as I think most of the weapons have much better stats and performance in almost every department than it.

The Mondragon Storm is another semi-automatic rifle. It is a great basic weapon to use for all the medics. It comes with a 10 bullet and a pretty fast reload. So, you can mostly focus on shooting enemies rather than reloading them all the time. It has two variants, a storm variant and a sniper/optical variant.

The damage stats for this weapon are very good. It does 40 damage at up to 40 meters and then the damage slowly falls off to 35 going up to 80 meters. This means that you can kill enemies with only 3 shots at most ranges. Combining this with its fast rate of fire is what makes this weapon so good.

Mondragón is a very accurate gun and this accuracy is only aided by the great sights that it has, which provides a very clear view when aiming down sight. With the sniper variant, one can take slightly longer-range fights. Both these variants are viable and one can use them according to his preference or depending on situations  I.e the map that you are playing. All in all, Mondragón is a very solid weapon to use.

RSC 1917 is a semi-auto medic rifle that is much different from many of its fellow weapons.

It has a magazine that supports 6 rounds at a time from a total of 54 rounds. What’s different about the RSC is that it can 2 shot enemies at up to 66 meters, with a body shot damage of 53. This demands a very specific kind of playstyle that is you have to play very passive and take fights at comparatively longer ranges than other medic rifles. The optical variant goes even better with this playstyle. With its extremely accurate shooting, you can wreck enemies this way. However, this is also what makes this gun less viable and much more situations-specific than anyone would like.

The rest of the stats such as the muzzle velocity, bullet drop and recoil, etc. Are pretty good. But it is not the best weapon when it comes to adapting to situations, which justifies its number 6 spot among the best medic rifles in Battlefield 1.

Federov Avtomat is the only true fully automatic rifle in the medic class. It is a very distinctive weapon when compared with the rest of the guns in this class.

This gun comes with 26 bullets in a magazine and semi-auto or automatic modes according to your choice. Federov has a trench as well as an optical variant. This weapon neither has good damage stats nor a decent range. This combined with being automatic, Federov is meant to be used for close quarter combat and this is the only place where it excels. You can only use it for very close-range fights as the damage falloff at a range is terrible, along with very low bullet velocity. Plus, the recoil goes all over the place, making it even less of a decent choice.

Although this gun does not have very good stats, it does excel at what it is meant to achieve. At close range, you can do very well with this weapon in your hand and also get quite the fun out of it. I had a very good time running around in the trenches and getting double kills with this gun. You can run around with no care in the world and still get decent scores. Because this weapon is not as viable in most situations, this justifies its  5th spot on this tier list.

Howell Automatic is one of my favorite medic guns in this game. This is because the gameplay experience that this gun provides is just different from all the other rifles.

Howell Automatic is a semi-auto rifle like most medic guns. It is very generous with ammunition as it has a 21 round magazine and a total of 84 rounds. It has a very high bullet velocity and a low bullet drop for those mid-high-range shots. The damage profile for this weapon is also very good with a damage of 42 up to 46 meters. This means that you can 3 shot kill people at this range and 4-shot kill enemies at higher ranges. The reload speed is also very decent and does not hinder your gameplay experience.

Blessed with a bipod on both its variants, which are the sniper and factory variants, Howell Automatic is extremely accurate. With its pinpoint accuracy and light speed bullet velocity, it is a very fun weapon to use in-game.

The Farquhar Hill has a lot of similarities with Howell Automatic which makes it already better than most of the other medic rifles. The damage stats on this gun are almost a mirror image of those of the Howell. Farquhar has a slightly faster reload, both on an empty magazine as well as a partial reload. It also has a bit of a faster bullet velocity at 800 m/s as compared to Howell’s 720 m/s, but the bullet drop is the same. Both these guns have similar fire rates as well.

What sets the Farquhar apart from the other guns is its almost unnoticeable recoil. There is zero screen shake and after every shot, the sight comes back very accurately. In my opinion, this low recoil is what makes the Farquhar slightly better than the Howell Automatic. Hence, it is appropriately placed at the number 3 spot.

The Selbstlader M1916 is one of the most complete medic rifles in Battlefield 1. It excels in every department and provides a very solid experience.

Selbstlader M1916 is a semi-auto rifle. In terms of damage, the Selbstlader is capable of 3-shot killing enemies at any range. This combined with its fast fire rate of 224 rpm, makes it an absolute killing machine. Even with a decent aim, you can just mow down enemies. This gun has a 26 round magazine which is a big plus when it comes to fighting multiple enemies at a time. The bullet velocity of 800 m/s is insane, for fast bullet velocity just makes every weapon so much more fun to play with.

Although the empty reload on this weapon is a bit slow, the rest of its pros just outweigh it. Also, it does not prove to be much of a hindrance for me, for this gun fits just right with my playstyle. All in all, the Selbstlader is a very solid and flexible weapon that can be used in a variety of situations.

The M1907 SL tops our list as the best medic rifle in Battlefield 1. It is not merely the stats that show this, but actually, the in-game performance of this gun is its loudest advocate. With the sweeper variant making it fully automatic, M1907 becomes an absolute beast that cleans up enemies like they are butter.

On paper, the M1907 rocks some very strong stats in almost all the departments. It has a magazine capacity of 21 rounds with a total of 84 rounds in hand. It has pretty decent reload times for both the partial and empty reload. The damage profile suggests that it gives a 3 shot kill at up to 21 meters with a damage of 42 per shot. This drops to 4 shots at 38 meters and then tapers to 5 shots at further ranges. This damage profile does not look too good on paper. However, what sets it apart is its 299 rpm rate of fire and the automatic mode of the sweeper variant. Both these combined, not only save it from shame but also put it up there as the best medic rifle in the game. For you will find yourself taking down multiple enemies at medium ranges with a single clip. After all, this is what all medic rifles aspire to achieve.

Gameplay-wise, the SL sweeper is a really fun gun to use. In my opinion, this is one of the best guns that Riot designed in this game. With unnoticeable recoil and all its other great features, you will often find yourself finding multi-kills. It is also effective up to decent ranges, considering it is only a medic rifle. This weapon achieves what it is supposed to and then much more. It also allows you to adapt your playstyle according to a variety of situations. This for me makes this gun the best medic rifle in this game.

In Battlefield 1, the medic class is designed to provide a unique experience to the player and it delivers in this regard. The guns are so well designed for this class that they aid in making this experience what it really is. This guide looks at all the aspects of these medic class weapons and ranks them according to how good you will find them in an actual game.

For more of such tier lists, you can check our ranking of the best snipers in Sniper Elite 4.