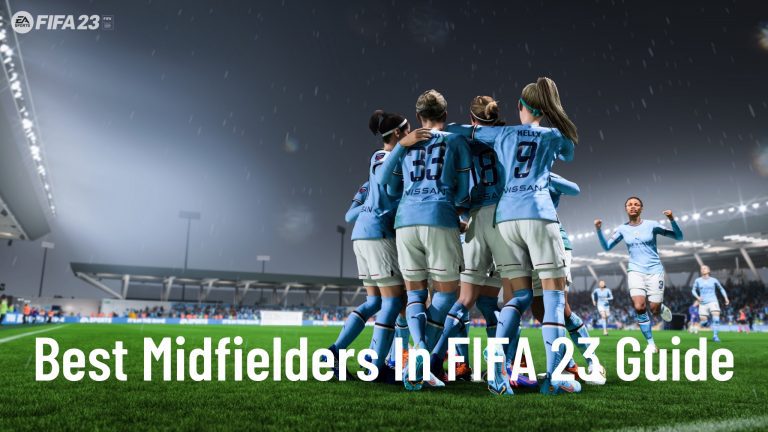 This guide brings you the Best midfielders in FIFA 23, so you can conveniently select the top ones in your team. We see three kinds of Midfielders in football: CM, CDM, and CAM.  Central Midfielders (CM) are the central midfielders who take care of defensive and attacking roles in the center.

The Central Defensive Midfielder (CDM), whose main role is defensive and assist the defenders. CDM act as the guard between the defenders and opponents. In the last, we have Central Attacking Midfielder (CAM), and the main focus is goal assistance and developing chances.

CAM position is essential as the position is to stay behind the attacker. To be the best Central Attacking Midfielder, one must have good dribbling, passing, long shots, and vision. Anyhow, selecting the best midfielder defines success in the match.

For this purpose, our guide is here to help you to find the pro midfielders in FIFA 23. Now let’s get started.

These are some of the best Midfielders in Fifa 23 with the latest stats updates.

Toni Kroos is a professional and best midfielder footballer. He is a German by nationality and plays for La Liga Club Real Madrid. Besides this, he has been playing as a central midfielder and a quite skilled and efficient playmaker. Kroos is a well-known midfielder, and some of his worth-considering attributes are passing, inventiveness, vision, and shooting.

Being 17 years old, he made a debut as he began his senior career when he played for Bayern Munich. Over all those years, he became a highly competent player and won a wide range of titles and trophies. Toni is a right-footed player and is famous for his preciseness and striking ability.

A Belgian Footballer is positioned as a midfielder in Premier League Club and Belgium national team. He is known as the best midfielder and most excellent player. He is seen in great demand in football and is regarded as an outright footballer as he is perfect in every way in terms of playing.

At Genk, he started his career, and luckily right from the start, he was a leading player. Signing with Wolfsburg benefited him greatly as his careebeganed to take a successful turn. In Manchester city’s record, he played a vital role and also won the player of the season reward. He is exceptionally functional and talented. The prominent positions include attacking and central midfielder, but he is versatile enough to play in specific other arrangements.

Luka Modric is another outstanding midfielder in FIFA 23. He plays for the La Liga club Real Madrid as a Croatian player. He is also considered the most fantastic footballer. Speaking of his positions, he plays as a defensive, attacking, and central midfielder. He got to join the Dinamo Zagreb based on his skills and potential. Furthermore, from here, he enhanced football. Won 3 league titles consecutively and showed magnificent performance.

2012 was the year of joining Real Madrid, and later became the most essential component of the team even though he won the reward of the best midfielder. He controls the central area creatively and professionally. Fans, other players, and higher figures admire his outclassing playing style. Modric can deal with highly pressurized situations efficiently and greatly assist his teammates.

De Jong is valued as one of the best midfielders in La Liga, representing Barcelona, and is a highly proficient Dutch footballer. His professional career commenced in 2015 at Willem ll and then was moved to Ajax, where he developed as the top-class Midfielder. Frenkie’s super bewildering attributes are: dribbling, attacking and defensive skills, passing and vision. He became the highlight and was widely recognized during the 2018 to 2019 season.

He is multi-talented and can take care of various Midfielder positions such as central, defensive, holding, and many more. It shows how brilliant this player is. He is good at gaining possession and has a fantastic sense regarding the positions he also has ultimate accuracy and control.

One of the top midfielders in the world is Dani Parejo. A dexterous Spanish central midfielder. He is a multi-talented midfielder of the highest caliber. He is capable of passing, shooting, dribbling, and defending. He is everything in one. He has been performing at the top of his ability for a while and doesn’t appear to be slowing down. He leads Valencia as captain, and the supporters adore him.

He serves as an example for younger players and is a real leader. Parejo is a sports star that is well worth the investment. Do not wait to watch him play if you have the chance. You won’t be dissatisfied.

Marco Verratti is an Italian professional footballer who plays as a midfielder for the French club Paris Saint–Germain and the Italy national team e is renowned for his passing, dribbling, and versatility as a defensive midfielder as well as an attacking midfield playmaker. Verratti started his professional career in 2009 with the Italian team Pescara, where he made his Serie A debut in 2011.

Later, in 2012, he moved to Paris Saint-Germain. Additionally, he is an excellent dribbler who can manage the ball in confined situations. He is a very calm player who rarely loses possession of the ball. He has scored some significant goals for his club and nation and is a strong finisher as well

Look no further than Leon Goretzka if you’re searching for a young, developing player to keep an eye on. The German midfielder, who is only 22 years old, has already displayed hints of his immense potential. He will only become better. Goretzka is a true all-around player in the park’s middle. He has a tremendous work ethic, is fantastic at recovering the ball and launching offenses, and has a good eye for goals.

In his little career thus far, he has scored some genuinely outstanding goals. It won’t be long until he plays for one of the greatest clubs in the world. He is currently a regular for his club, Schalke, and the German national team. Keep a watch on Leon Goretzka; he has enormous things coming.

He made his debut for the German national team in 2016 and went on to win the 2018 FIFA World Cup while representing his nation. His technical skill, tactical awareness, and work ethic have earned him recognition as one of the top central players in the world.

Thiago Alcantara has more ability and technique than any player I can recall ever seeing. He constantly appears to find space and time on the field that no one else can due to his exceptional ball skills. He began his career at FC Barcelona, where he won the UEFA Champions League in 2009. Thanks to his exceptional vision and passing, he consistently seems to generate opportunities for his teammates.

He can dribble well and is a constant danger going forward. Thiago Alcantara is undoubtedly one of the best midfielders in the world and an incredible player all around.

Serbian footballer Sergej Milinković competes for both the Serbian national team and the Italian club Lazio as a midfielder. He is acknowledged as one of the finest midfielders in Serie A and has received praise for his passing range, technical prowess, and vision. Milinkovi is a tall, physically powerful, and athletic midfielder who also has exceptional technique, vision, and game-reading skills, allowing him to play in a variety of midfield positions.

Although he prefers to play as an offensive midfielder, he can also be used as a deep-lying playmaker or as a center midfielder.

Our team has listed down the best Midfielders in FIFA 23 for our readers. This brief guide contains all the information you need to know about the current topic. We hope that you will get benefit from this article. Kindly share with your friends and leave a review.