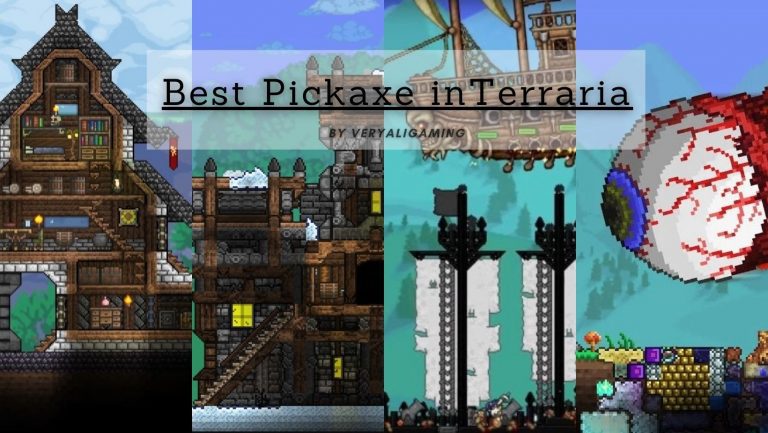 Terraria offers players a lot of pickaxe options to choose from. It can get overwhelming for a newer player. This guide will show you the best pickaxes to help you mine quicker and beat the game.

Terraria is an extremely challenging game and chances are that your starting hours will be difficult. Eventually, you’ll find cool equipment that will assist you in reaching the end of the game easily. One of the most important pieces of equipment is the pickaxe. Today’s guide will help you choose the Best Pickaxe in Terraria so you can easily mine your way to victory.

Just like swords are important, a good pickaxe will allow you to mine quickly and dig out the rarest ores in the game. Some of these pickaxes are really rare and difficult to stumble upon but with our guide, you’ll get them in no time. Speaking of axes, check out our guide about the Best Axe Pommel in God of War as well.

With that being said, let’s jump straight in and find out the Best Pickaxe in Terraria.

While you may progress a lot of the game by using common pickaxes, the ones mentioned in this list will help you especially when you unlock Hardmode. After defeating all the main bosses, Terraria allows you to play in Hardmode – where you can mine new ores and fight difficult monsters. Without using one of the listed pickaxes, you will not be able to finish the game – or have an extremely difficult time.

Starting off our list with a strong pickaxe that will require some effort to unlock but it is absolutely worth it. It has a pickaxe power of 190 and is crafted with a Titanium bar. This is the best pickaxe below the 200-power mark, making it extremely viable till the late game.

The major difference between this pickaxe and other options in the same power range is its damage. It deals 27 damage and a swift attack speed. On top of that, mining is really fast with this as well making life easier for you.
Another good thing is that you gain a 21% critical strike chance which is always welcomed and you have a decent knockback. Below the 200 power, this is easily the best pickaxe for you to choose from.

Having damage of 32 and a knockback range of 5.25, the Spectre Pickaxe is an extremely good option. You can unlock this after defeating Plantera and it has a mining range of 3 blocks. The speed of this pickaxe is swift and you’ll mine blocks in no time.

To craft it, you will need Spectre Bars and a Mythril or Orichalcum Anvil. While this and the next option have the same power level, the Spectre Pickaxe performs better in smaller areas. Selling it will grant you 4 gold and 32 silver coins which is a decent value. The main advantage of this is its range as it will allow you to reach areas quicker.

Tons of pickaxes have 200 power but the best out of all of them is the Shroomite Digging Claw. This is mostly due to its damage and knockback of enemies after hitting them. Crafted by Chlorophyte bars and Glowing Mushrooms, this pickaxe will make mining a lot quicker.

Since you require the Autohammer machine – bought from a Truffle NPC, you can only craft it after defeating Plantera in the Hardmode. This pickaxe looks like a claw which looks intimidating. The Shroomite Digging Claw is ideal for mining large areas due to its sheer speed. Although, its range is a little less than most options but the speed more than makes up for it.

Moving on to the second-Best Pickaxe in Terraria, the Picksaw. It has a chance of dropping from the Golem located in the underground jungle. Not only does it deal 34 damage, but it also has a pickaxe power of 210. Once you get the Picksaw, you will be able to mine every block in Terraria without any issues.

If you do not get this pickaxe after defeating a Golem, you should try again to see if it drops the Picksaw. Since the drop rate is relatively low – 25% – chances are that you won’t get it in the first go. The best part about this pickaxe is that you can even chop down trees with it, making it a 3-in-1 tool. After getting it, you will not need your normal axe top chop down trees, saving you precious inventory space.

Keep in mind that this pickaxe can only be unlocked after defeating Plantera in the underground jungle during Hardmode. Most players use this pickaxe even after the endgame as it can mine all blocks and has amazing stats.

The Luminite Pickaxes are easily the strongest in Terraria. Not only are they extremely rare, but they can only be crafted after beating the Moon Lord – which is the final boss of the game. Once you defeat the final boss, you’ll have access to Luminite bars which are required to craft these strong pickaxes.

There is a total of 4 different variants but all of them have the same stats. The difference in their appearance is completely cosmetic and it is up to you to pick the one you like best. This pickaxe has a 225-pickaxe power – the highest in Terraria. On top of that, it deals 80 damage to creatures so you won’t have to swap to your sword in the mines.

The four variants are named Vortex, Stardust, Solar Flare, and Nebula pickaxe. All of these require Vortex Frags, Stardust Frags, Solar Frags, Nebula Frags, and Luminite bars respectively to craft. My favorite is the Nebula variant due to its design and color. However, you may craft whichever one you find most aesthetically pleasing.

All of the aforementioned pickaxes are top-notch and will get you through the end game easily. They are a must-have item if you wish to mine rare ores and beat the game. Some are clearly better than others but I would suggest crafting the one for which you have materials instead of waiting to craft the best one. As soon as you can get your hands on one of these choices, you’ll see a massive increase in efficiency and effectiveness during mining.

That about does it for this guide about the Best Pickaxe in Terraria. Let me know in the comments below which one is your favorite and why.