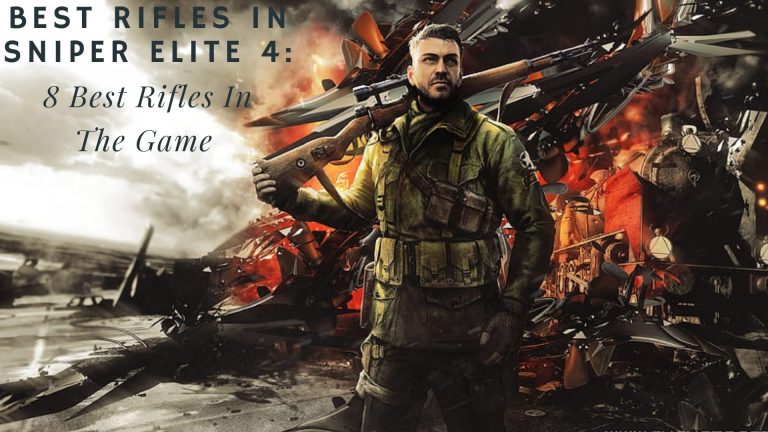 Sniper Elite 4 is a third-person shooter that offers a very different style of gameplay from many other titles of a similar genre. It provides a distinctive experience that has led it to develop a unique fan base over the course of the Sniper Elite series. Like other shooting games, Sniper Elite 4 has a generous collection of weapons, more specifically rifles, with each having its own features that affect the gunplay in one way or another. Just like in every other game, the fans of this game need a ranking of the best rifles in the game. So, here we take a look at the 8 best rifles in Sniper Elite 4.

Following is an in-depth look at some of the best rifles in the game. We will take weapon stats, gunplay, the overall feel of the weapon, its effectiveness and basically everything into account. Here’s a ranking from good to the very best of the guns in this game.

Mannlicher is a bolt action sniper rifle. This gun does not belong to the very top of the weapons in the game because it suffers in a few departments. Firstly, the gun does not have great damage stats. Damage refers purely to non-critical shots, as headshots with any rifle are basically a one-hit-kill. This makes some of the closer mid-range fights a bit hard to win with the Mannlicher.

Secondly, the gun has a decent fire rate. This is because this rifle has a straight bolt instead of a conventional bolt system. However, fire rate is not an important or relevant stat when it comes to bolt action rifles. It is not something that makes such a rifle good.

In terms of the rest of the stats, such as range, stability etc. this rifle is decent at best. It does make up a bit in terms of gunplay because it is quite satisfying to use this rifle. But being much lacking in several ways, the number 8th spot is justified for the Mannlicher.

Lee-Enfield is another bolt action sniper rifle. This weapon has slightly better stats than the Mannlicher. It has the best magazine capacity of all the bolt actions in the game, with a 10-bullet mag. This is admirable, as in certain situations it is better to keep fighting multiple enemies without reloading. But magazine size is still not the stat that one looks for in a bolt action, as many rifles have better performance in everything else and are much more worth it.

The Enfield also has acceptable damage stats along with a fine range. The thing that really makes it a deal-breaker though, is its painfully long reload time. The character reloads all the 10 rounds by hand, individually. On a day when you are just not hitting your shots, this can put you in a highly unfavourable situation.

The weapon does have a good feel in terms of gameplay. It is extremely satisfying to hit those headshots and the gun sounds are top-notch. For all the above reasons, we have placed this rifle in the 7th spot.

In terms of performance, it is very similar to some of the good bolt action rifles in the game. It has good damage stats and performs pretty well at range. The downside with this gun is that it also has a reload time that puts the long life of a turtle to shame. With a 5-bullet magazine cap, the longer reload can be an issue for some people. However, the great gunplay makes up for this(well, at least a little), especially in PvE when the stakes are not that high.

As a gun enthusiast, Winchesters have been some of my favourite guns to use in games as well as in real life. That didn’t change much when I played Sniper Elite 4 as I immediately fell in love with this gun the day I unlocked it. Winchester 1895 is my personal favourite as it is the only gun in the game that has a lever action. The lever action is unique to it, which definitely makes it one of the coolest and most fun rifles to play with.

For PvP though, you might want to go for one of the top 5 rifles that we mention next.

This rifle is given to you at the very start of the game. It is an excellent rifle for beginners, as well as a great gun overall. The Springfield performs fantastic at range. This gun also has a 5-bullet magazine capacity and also a bit of a lengthy reload like most of the previous entries of this list. However, reload speed is an almost stupid thing to consider about a bolt action rifle. With bolt actions, what matters the most is their range and damage (especially at a range). Springfield excels at both of these, providing for some very satisfying long-range headshots.

The gun has great stability, which is a key asset in sniper rifles. I love using this rifle for it provides a high level of sniper gameplay. With these attributes, Springfield fits the 5th spot on the list.

Ross MK 3 is another bolt action sniper rifle. This gun is much popular, as it rocks one of the dopest looking scopes of any rifle in the game and probably in history. Honestly, it’s perks like this that make certain guns in games so much more fun to use.

Stats wise, the rifle has good range and damage stats and performs fantastically in long ranges. Only to mention, it also has a low magazine capacity and a long reload, but who can complain when it has got a scope like that! Right?

Some players prefer the Springfield over the Ross. Statistically, although very close, Springfield is definitely a better choice, but Ross is far more fun in terms of gameplay. This is why it occupies the 4th spot on the list.

After the dopest-looking scope, we have probably the coolest name of any rifle ever. Mosin Nagant has been my favourite gun to use over multiple games, and it hasn’t changed with Sniper Elite 4, with it being a staple of the Sniper Elite series.

Mosin is a proper S-tier killing machine with all its stats being sky-high. It performs great at all sorts of ranges and helps you put holes in those heads. After all, that’s what you are playing this game for. The reload time is mediocre, which is probably the only thing that holds it back from being the very best.

Delisle Carbine is a silenced rifle that was added with the “Silent warfare weapons pack” DLC. This gun is great, and it offers a role much different from most of the other guns in this game.

This gun is not designed for long-range fights and all its stats suggest so. It has decent damage but extremely poor bullet drop and muzzle velocity. The bullet-drop and muzzle velocity probably stem from the gun being a silenced weapon. It also has bad range stats and the zoom on its scope is not good either. All these things suggest that the gun is meant for short to mid-range battles.

Within the limits of its role, if used properly, Delisle turns the beast mode on, making it one of the best rifles in Sniper Elite 4. Being silenced is probably the best feature, allowing you to stay stealthy in various situations. With its slightly limited role, the Delisle is rightly deserving of the 2nd spot on the list.

Arguably or inarguably, Carcano is the best rifle in Sniper Elite 4. There can’t be much said against this gun being the best in the game.

The Carcano is an absolute war machine that does astounding damage. It is there to blast those Nazi heads right off, and it is amazing at it, the best in our opinion. It has the muzzle velocity of a skyrocket and almost zero bullet drop. This gun makes killing enemies, even at very long ranges, easier than driving a knife through hot butter. This gun reverses the phrase and makes it “easier done than said”. One just loves it when the Carcano goes boom! It has to be said, Rebellion has done an amazing job at designing these weapons. Especially the sounds of these guns are just brilliant.

Carcano rocks 6 rounds in the chamber, and it is fed by magazines, instead of by hand. This makes reloading in tricky situations much easier. The only drawback of this rifle is its high recoil but that is probably not the worst thing in the world in terms of bolt action rifles. It also has low zoom and a bit of a scope wobble. But again, these are compensated by the great shooting that this gun offers.

This tier list follows the best rifles in Sniper Elite 4. Taking all the stats into account, as well as the gameplay of these weapons, this ranking provides a fairly good idea about the best rifles in the game. We have written it so that it is easy for you to choose the weapon you want to play your next with. To conclude, the Carcano, Delisle Carbine and Mosin Nagant are some of the very best of the rifles in the game and you may want to choose one of them according to whatever situation you are playing.

For more such weapon rankings, you can check our Fusion Rifles tier list for Destiny 2.