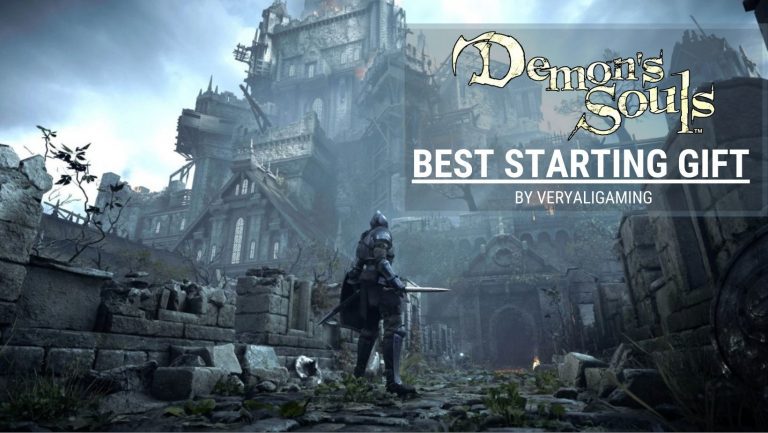 There are nine starting gifts to choose from in Demon's Souls. Which one is the best? Let's find out!
December 21, 2021

There are nine starting gifts to choose from in Demon's Souls. Which one is the best? Let's find out!

Demon’s Souls was originally released for the PS3 all the way back in 2009. Bluepoints Games remade the hit game for the newest PlayStation 5. While most hardcore Souls fans might have played this game, casual gamers will be playing it for the first time. As such, the first choice that you will be prompted with is to choose a starting gift. That is why this guide will focus on the Best Starting Gift in Demon’s Souls for the PS5.

Some of the starting gifts are quite useful in the early game while others are useful throughout the game. This guide will take a look at all of the gifts and rank them accordingly. Plus, if this is your first Souls game, we will show you the best beginner-friendly gift as well. With that said, let’s dive straight in and find out what is the Best Starting Gift in Demon’s Souls.

Much like the Dark Souls 3 Burial Gifts, there are a total of nine options for you to choose from in the Demon’s Souls remake. This can be quite overwhelming for newer players but worry not because we’ve got you covered. Let’s take a look at all of the starting gifts and rank them accordingly.

The Augite of Guidance is probably the weakest starting gift in Demon’s Souls. It is a consumable item that shows the path which the players should take. Upon picking this gift, you will get 10 items that you can use over time. It can help you if you are lost but considering that Demon’s Souls is a semi-linear game, you will not have trouble finding your way.

Since it is quite impossible for you to properly get lost in Demon’s Souls, the Augite of Guidance is the most useless starting gift by far. On top of that, this item does not offer any offensive or defensive stats so it won’t help you during boss battles.

If you want to prepare yourself for the stealth mechanics being introduced in Elden Ring, you will want to use this item. Soul Remains allows you to throw an item that will distract all enemies in the radius. Doing so will allow you to sneak past enemies or attack them from behind to deal additional damage.

However, there is a limited quantity that you get when you choose this gift. If you run out of this item, you can always purchase more from the Graverobber Blige located on The Ritual Path. You can also loot this off of various enemies as well. Starters will like this item as it lets you sneak past enemies that are giving you a tough time.

If you are focusing on a magic build, you will naturally need a lot of MP. Players will notice that they run out of MP quite easily in the early game. Which is where the Bright Water comes into play. This starting gift is quite similar to the Grass Jelly but instead, it recovers your MP over time. Like the Grass Jelly, you will get two items if you choose this gift. Use them carefully until you can get your hands on other sources of MP recovery.

If you are a veteran of the Souls games, you will probably agree that stamina management is one of the most important aspects of the game. As such, newer players tend to burn through their stamina and do not manage it properly. This causes them to take unnecessary hits from enemies; leading to the infamous “You Died” screen.

Using the Elixir will allow you to recover some of your stamina at a faster pace for a short duration. This is especially useful when you are fighting against a boss. Having faster stamina recovery will let you dodge more and attack the boss without losing all of your stamina.

The Grass Jelly is a good choice for starters as it is a consumable that gradually restores HP. Players will receive two Grass Jellies when they pick this gift and you can use it anytime you want to. As a new player, you will get hit by enemies a lot.

That is why this gift can be quite useful to have on top of the various grasses that you find. Since there isn’t an Estus Flask in Demon’s Souls, having the additional Grass Jelly is beneficial. The healing system in this game works similarly to that of Bloodborne’s Blood Vials. You can pick up a number of grasses and – depending on how much they weigh – they will heal you.

This item was introduced in the remake version of the game so this is a new one for every player. The Providential Ring is the only starting gift that is permanent and can potentially last through the entire game if you want. Whether you are a new player or a veteran, choosing the Providential Ring will give you a head start and allow you to pick up all the items in the area.

The ring boosts your item discovery rate and allows you to gather all the items from the early game. Players will get a chance to get this ring later on in the game but it is better to have it from the start. Plus, if you are a completionist, you will want to get this gift in order to complete the King of Rings trophy.

Getting the Kunai as a starting gift can help you through some sticky situations. Throwing it will apply the poison debuff on enemies. On top of that, it also deals a good amount of damage considering that it is a starting gift. However, since it is consumable, you will get a limited supply. You can purchase more Kunai From the Graverobber Bilge. Using the Kunai can help you get past difficult enemies during the start of the game.

Much like the Kunai, you can lock onto an enemy and shoot fire arrows from your bow. This is great against certain types of enemies and allows you to keep your distance and attack safely. This can apply the burn effect on your foes; causing them to take additional fire damage for a short duration. If you run out of these arrows, you can get them from the Graverobber Bilge. Plus, if you want to defeat the tutorial boss, these arrows are extremely useful against him.

Finally, the Fire Bomb is one of the best starting gifts in Demon’s Souls. Upon picking it, you will get five bombs that deal an insane amount of damage. You can guess the lethality of this item considering its short and limited supply. When you throw it, the target bursts into flames and takes burn damage over time.

This item is extremely useful against Phalanx as it allows you to defeat it easily. If you run out of firebombs, you can get more from Merchant Dregling located at the Boletario Palace. Needless to say, you definitely should try out this gift as it is effective against tons of enemies.

That about does it for our guide about the Best Starting Gift in Demon’s Souls. While the best gift can depend on your playstyle and preference, it is no surprise that some are clearly better than others. Make sure that you try out all of the gifts on various playthroughs to find your favorite one. We would love to know your thoughts about what is your favorite starting gift and why.

What is the best starting gift for starters?

Is the Bright water good for the Knight class?

Knights shouldn’t get the Bright Water as it restores your MP over time. If you picked the Knight class, you will not need any MP so the gift is useless. We suggest choosing the Fire Bomb or the Providential Ring. Both of these items are great with the Knight class and are effective.

Is Kunai good against bosses?

Yes, the Kunai is great against bosses. You can lock onto the boss and spam your Kunai at them to inflict decent amounts of damage. On top of that, it also puts the poison debuff on them which causes them to take damage over time. This gives you a chance to recover your stamina and safely roll away while they take damage.