Finding the ideal build in Monster Hunter World can be a difficult undertaking. This guide will clear up any confusions and show you the best sword and shield builds in the game. 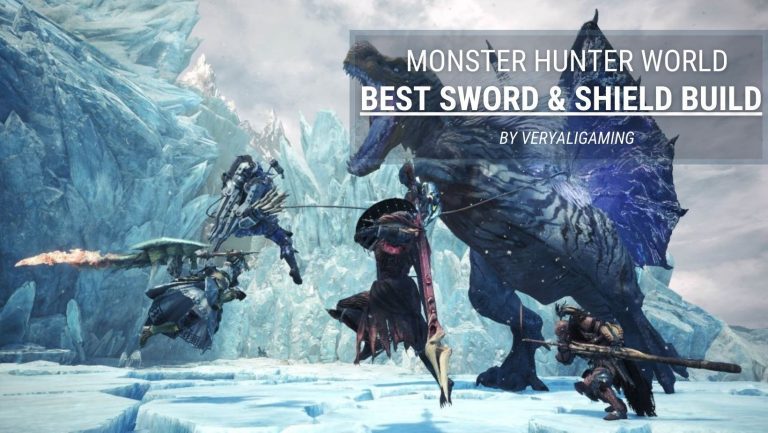 Players have the option to choose from 14 unique weapons in Monster Hunter World. This allows you to pick the weapon that is optimal for your playstyle. Not only that, but players also can build their character to be more compatible with a certain weapon set than others. Today’s guide will be taking a look at the Best Sword and Shield Build MHW.

Sword and shield are the most ideal weapons for newer players since they have decent stats across the board. It is a perfect solo weapon in Monster Hunter World as you have good guard, damage, and attack speed. This allows you to perform combos at a faster rate and also guard against enemy attacks.

Without wasting any time, let’s dive straight into the Best Sword and Shield Build MHW.

One of the most versatile weapons in the game; the sword and shield are preferred by players looking for high mobility and decent damage. Since there are dozens of builds that you can try, here are the best three builds. They are constructed from the rarest armor, weaponry, and jewels in the game.

Since this guide will feature 2 builds, they should cater to every type of playstyle. The build featured here will lean more towards DPS than anything else but will also feature support and survival options.

This is a build all about having a high raw attack, so you’re able to take on monsters quickly and effectively. As you are focusing on raw attacks and not elemental attacks, it means that you don’t have to take into account the monster’s resistances. So, it can be used against pretty much anything in Monster Hunter World. On top of that, it has a ton of quality of life defensive skills, making it a great all-around build.

Moving on to the actual build; you’ll need the Brachydium Helm, Dragonhide, Dragonclaws, Dragonbarbs, and Dragonfeet. Using the Challenger Charm V can also prove extremely beneficial. As for the weapon, choosing the True Fatalis Sword is ideal. This has a health regeneration augmentation and attack increase augmentation. As well as for the specialist tools, these are down to personal preference. I went with the Temporal Mantle and Rocksteady Mantle.

When it comes to the jewels, you’ve got a ton to play around with. If you do not have all the jewels featured here, you can swap them out for what you have available. First of all, using all the Flawless jewels will max out the peak performance. Then, equip the protection jewels to receive the divine blessing. The critical jewels provide a quick boost and the expert jewels for the increased critical chance—finally, the challenger jewels to max out the agitator’s skill.

Equipping the attack jewels is highly recommended as it will enhance your attack power; this build is all about that. As for the jewels for the mantles, these are again down to preference but I’ve gone for Dragon jewels to add a little bit of dragon attack to the build.

As far as the stats go, you’ll have 200 health and 200 stamina regardless of if you’ve taken consumables or not. You have a raw attack of 547 which will be higher when you take into account the peak performance being active. Plus, you’ll have a strong defense of 111; that excels against water and thunder but is weak against fire and ice.

Now taking a look at the skills, you will want to have an attack boost at level 7. This will further enhance the raw attack of your build while providing a bonus of 5% extra affinity. Next, upgrade the critical eye to level 7, increasing the base affinity of the build. Next up, you will want to put the agitator to level 7. This is extremely useful as it is a wonderful buff that kicks in whenever a monster becomes enraged. When this happens, you’ll deal with increased raw attack and base affinity. For the rest of the stats; you can put points in whatever you prefer since they are not part of the main build and only assist in defensive aspects.

As you can see, this is a jack of all trades build; having an extremely strong offence combined with defense, means that you can take on pretty much any monster in the game. The biggest pro for this build is its high damage output and strong defense. However, the major downside is that it is a heavy jewel build. If you do not have access to the rarest jewels in the game, you will not be nearly as strong with this build. With all that being said, this is my top pick for the Best Sword and Shield Build MHW.

Unlike the previous one, this build is all about dealing elemental damage. Thus, you have to take into account a monster’s elemental resistances. If you do keep this in mind and counter them with the correct element; this build can take down monsters incredibly quickly.

For this build, you’ll need the entire Safi Crested armor set. You can also add a blaze charm V mixed with the Temporal and Rocksteady Mantles. Swap the Blaze Charm V with whatever element you want to use. Finally, the weapon of choice for this build is the Kjarr Slicer “King”. This has a health regeneration augmentation and then elemental buff augmentation.

So, when it comes to the jewels, you’ve got a few to play around with. First of all, the Blaze Jewel 1 is optimal to max out the fire attack of this build. As mentioned with the Blaze Charm, you should replace this jewel with whatever element you are using. Then, it would be best if you equipped the Tenderizer jewels for weakness exploit, evasion for evade window, and vitality for a health boost. You can also use shield, sharp, shaver, and fortitude jewels for various buffs.

As for the jewels for the mantles, the attack and protection jewels work wonders. If you follow this build, you’ll have 150 health, 100 stamina. You will also have a raw attack of 444 with a decent chunk of white sharpness. Plus, you’ll have 55 base affinity which can easily be 100 when you take into account weakness exploit. Finally, you have an elemental rating of 840 – depending on the element being used. This build also gives you a decent defense of 1081 that is strong against every element except for the dragon.

You will want to put points into fire attack, agitator, evade window, health boost, blight resistance, critical boost, and weakness exploit when it comes to skills. Of course, if you were using a different weapon with a different element, the ratings will be accordingly.

If you’ve got a large number of elemental weapons, this is a build to consider. The biggest pro for this build is its high elemental damage output and quality of life skills. The only major downside I can see is the lack of damage from normal attacks. This is a high-risk, high-reward build, and it certainly pays off.

These builds are the best and most viable when it comes down to sword and shield builds. These builds are aimed to be strong and can take on pretty much anything. The featured builds may be slightly different from other meta builds in the community, but regardless these are extremely useful. You can take on end-game monsters – even in the latest expansions, without a single worry. You’ll have good amounts of damage, defense, and health regeneration.

Whatever you prefer is up to you but you’ll have a good time trying out both of these options. That brings us to the end of our guide about Best Sword and Shield Build MHW. Let me know in the comments below which weapon you prefer and which build is your favorite.