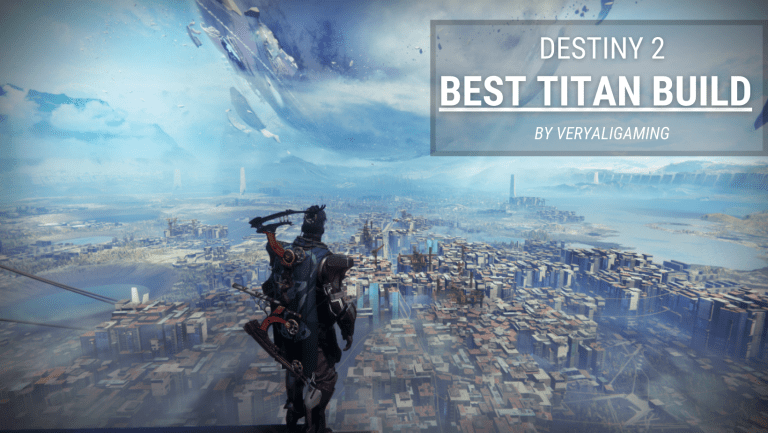 Titan builds are in the meta in Destiny 2 this season. This guide will show you the optimal setup for your ideal build.

Destiny 2 allows players to try out various builds to see which one suits their playstyle the most. You can equip various weapons, armor, and mods to complement the build that you are planning to do. Today’s guide will be focusing on a build that is extremely strong and is in the current meta of the game. This guide is all about the Best Titan Build Destiny 2.

Using this build will not only make PVP easier for you, but it will also make it convenient to complete quests like forging the broadsword. This, in turn, makes it easier to get unique loot – like the Thorn hand cannon, since you will decimate through your enemies.

Let’s dive straight into the guide, and see which armor, weapons, and mods are viable.

Since there are tons of aspects to cover, I divided this guide into sections that focus on each aspect in detail. This build completely breaks the game in so many different ways. It’s a ton of fun to use and can deal some massive damage thanks to a combination of a few new mod and weapons introduced in this season. I’m going to break down and cover every aspect of this build, so be sure to check them out and not miss out on anything important.

Season of the Splicer has been a godsend for build crafting. Bungie gave the players a blank canvas and all the paint in the world to come up with some fun and unique builds. Some of the mods are a little bit broken in the sandbox, but that’s what makes them fun.

The central mod of this entire build is one from the seasonal artifact. It was causing some issues and got disabled for a while towards the beginning of the season. Now, it’s back in full strength, and it’s still extremely powerful due to the weird interactions with certain weapons. The mod in question is the Energy Accelerant.

Despite what its description states, it does a lot more than that. There are tons of things that get affected by this mod but aren’t listed in its vague description. What occurs is that any weapon that causes some sort of explosion, benefits greatly and gets a huge damage boost. Some weapons are meant to work with it; however, others are a bit surprising.

There are a lot of other mods that go well with this build but we’ll touch on them a little later. For now, let’s take a look at the weapons that we are going to be pairing alongside Energy Accelerant. All three of our weapons in this build will take full advantage of this mod.

The primary weapon of choice will be the beloved hand cannon; Fatebringer. This hand cannon just came back into Destiny 2, and it’s available from the vault of glass raid. It is an extremely unique hand cannon and can role with the perk “Firefly”. This perk goes hand to hand with the mod discussed before. It deals solar damage and can roll on kinetic weapons like Fatebringer. You can also potentially get a fast reload if you get a precision kill with this perk.

Due to the firefly synergy, this weapon deals more damage than intended and becomes even more potent than before. If you’re having trouble aiming this weapon, try using the Targeting Adjustor since it helps out a lot.

Now for the special weapon of choice, we will reach back a few seasons to an exotic that many players might have forgotten about; the Ruinous Effigy. This weapon did see some nerfs heading into Beyond Light, and many players were upset about this because it didn’t make sense.

Bungie added a full suite of trace rifle mods to the game this season and indirectly made that entire class of weapons more viable. Things like the trace rifle scavenger are finally viable now and greatly improves the ammo economy of this class of weapon.

The reason why Ruinous is so powerful is because of those transmutation spheres that the weapon creates. Getting the final blow will collapse the victims into a void transmutation sphere that you can pick up and use as a weapon. This weapon is unique and fun to use thanks to its move set.

Since Energy Accelerant affects weapons that deal explosion damage; when you use the heavy attack of the Ruinous, it activates the mod and amplifies the overall damage. The damage buff is quite significant as you can slam the champions and kill them in one hit.

Finally, in the heavy slot, we have a sword that has been making waves across the game this season; the Crown Splitter. This sword was one of the three gnostic swords from way back in Destiny 2. These swords are easily farmable as well, which makes them convenient to collect. Crown Splitter can roll with either Whirlwind Blade or Vorpal weapon in the final column. Either of those perks makes the sword fantastic.

As you’ve probably guessed by now, Crown Splitter is too affected by Energy Accelerant since it also has an explosive slam attack. It makes laughably easy work of champions and takes them out with one fell swoop.

This build isn’t just a love letter to Energy Accelerant; it is much more than that. We still have room for a ton of other armor mods to flesh out this build and make it stronger.

Starting with our subclass of choice, you would want to run Middle Tree Sentinel on the titan. This subclass is already really strong for PVE in its own right; there is an incredible synergy made for this build. It has the unique mechanic of void detonators. Anytime you hit an enemy with a void ability, it will attach a void detonator to them. Upon taking further damage, they explode.

What is already a fun mechanic can really be taken to the next level thanks to another seasonal artifact mod; Warmind’s Decree. Due to this, the void detonators have the potential to create warmind’s cells. In short; the enemy will explode twice upon dying from any of your void weapons or abilities. This also stacks with the Ruinous Effigy and Crown Splitter since they have a void explosive attack.

Similar to Warmind’s Decree, this mod only costs one energy and stacks well with your primary weapon. This mod allows the solar splash damage kills have a chance to create Warmind Cells. Since Fatebringer was already buffed twice due to the mods, this is just icing on the cake. Due to the insane amount of damage, this truly is the Best Titan Build in Destiny 2. Not only are you a monster in PVE, but you also will destroy enemies in PVP.

The rest of our armor mods will keep it straightforward. Using the Lucent Blade will grant you bonus damage whenever you use a sword. Along with that, you will also want to run Taking Charge. This allows you to pick up orbs of light which will charge you with light allowing you to use Lucent Blades in the first place.

You can swap Taking Charge with a whole myriad of different green charged with light mods, but Taking Charge provides ease of use. It also works passively without having to pay attention since you will be picking up orbs just by walking near them during combat.

For a little bit of a wild card and added strength, I recommend using the Unstoppable Condensor. Your void melee abilities are now capable of stunning unstoppable champions. This mod isn’t the most practical, it can always come in handy during tough situations. Plus, this occupies a free mod slot, so it’s not like it takes up space that would otherwise be required for something else.

For the Exotic armor of choice, I’m running the Ursa Furiosa. These are a really great pairing for the middle tree sentinel and will assist this build to stay relevant in harder content like nightfalls. You could swap it out for something like stronghold if you want to lean towards sword gameplay. The Ursa helps you fill out that support role that sentinel typically fills and is overall more useful with this build.

Once you have all of the mods equipped alongside the exotic armor and the weapons, you are ready to be an absolute PVE beast. This might be confusing for newer players, but if you follow everything step by step, you will not face any difficulties and will be able to use this build flawlessly. You will have great clear speed thanks to firefly and fatebringer and massive single target damage from Crown Splitter. All working together with Energy Accelerant and Warmind’s Decree will destroy everything.

With that being said, today’s guide about Best Titan Build Destiny 2 comes to an end. I hope this guide will assist you in trying out this build for yourself. Let me know in the comments below what you thought of this and what build is your favorite.