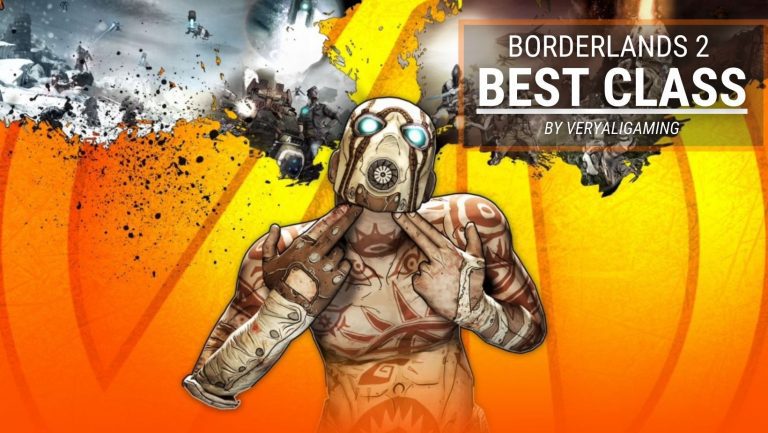 Out of the six classes in Borderlands 2, which one is the best? Check out this guide to find out which class is useful for coop and solo players

Even after the release of the highly acclaimed Borderlands 3, its predecessor still holds a special place in the hearts of fans. Borderlands 2 is considered one of the best games by Gearbox Software’s. To this day, Borderlands 2 is going strong thanks to mod support, story, quirky quests, memorable characters, and classes. Today’s guide will focus on the Borderlands 2 Best Class.

Depending on your playstyle, you may prefer a certain class over another, but they are extremely fun to use. None of the classes are weak since every character has abilities that work best in specific scenarios.
Without wasting any time, let’s jump straight right in and find out the Borderlands 2 Best Class.

There are a total of 6 classes – including the 2 offered in the DLC – in Borderlands 2, giving the player plenty of options to choose from. Each class has unique abilities and appearances, differentiating them from each other. The game offers players a diverse cast of characters that they can pick and take on Handsome Jack. Also, keep in mind that every class has three upgrade trees where players can allot skill points. Since you cannot max out all three of them, every player will end up with different abilities.

Right off the bat, most newer players are attracted towards Zer0, the assassin. While he is ranked at the bottom, Zer0 is an extremely fun-to-play character that – if used properly – can do some serious damage. With that being said, I wouldn’t suggest beginners try him out. During your first couple of playthroughs of Borderlands 2, you’ll find that Zer0 is extremely difficult to use since he dies quickly.

The point where the assassin class shines is when you unlock some of its best abilities in the late game. As the name suggests, this class is ideal for fans of stealth and long-range combat. Since his HP is lower than others, you’ll want to use the sniper rifle and keep your distance from the waves of enemies coming your way.

When you reach the endgame, that’s another story. I found that Zer0 has amazing late-game abilities, which are best suited when paired with a frontline character. Out of the three skill trees, you will want to upgrade Bloodshed for melee combat, Cunning if you want to focus on utility abilities, and Sniping.

However, if you are a solo player, Zer0 might not be ideal since all enemies will focus on you instead of the front line. This leaves you vulnerable to attacks and will make your sniper rifle lose its value. For that, I recommend constantly switching up the skill tree to maintain relevance.

For a character who’s featured on the iconic cover of Borderlands 2, Psycho isn’t the best class you can choose. Psycho – also known as Krieg – is a melee-focused character best for pummelling a bunch of enemies. Fitting for his name, Buzz Ax Rampage’s ability sends Krieg into a fury of rage. At this point, he switches the guns for a large two-handed axe. This axe deals 500% damage and on top of that, you get back a chunk of health for every kill you get.

Players who are looking to create chaos will love this class. You can either focus on a heavy melee build, a build focusing on grenades, or light yourself on fire and run through the battlefield. Let’s face it, the last build sounds extremely fun, and playing Borderlands is all about creating chaos.

Since Psycho is a melee-focused character, this can raise tons of challenges for the player. While he is super fun to play, it can be difficult to use him at full potential when playing solo. His close-range gameplay will ensure that all enemies focus on you, which can leave you heavily damaged.

Possibly the best class if you are looking to play with your friends or in a team. The Siren is the Borderlands version of a healer or a supporting character. She has tons of area-of-effect abilities that make it easy to take out enemies that surround you. One such ability is called Phaselock. Siren creates a bubble that traps enemies inside it and makes them float. When fully upgraded, Phaselock deals an insane amount of damage that kills enemies in an instant.

Your playstyle when playing Siren should focus on using Phaselock as much as you can. It has the lowest cooldown out of any other ability. Depending on your playstyle, you can either play Siren as a healer/crowd controller or make her into damage dealing beast. Even if you are a solo player, she will shine due to her abilities, but her full potential comes out when you play with a team.

Maya is extremely strong against smaller enemies and even some of the larger bosses. If you want to get through the campaign quickly, I would suggest choosing her. However, for post-game activities, Siren isn’t the best choice if you plan to play solo.

You cannot go wrong with choosing the Commando class. Axton is an all-around character that is recommended to every new player. Due to his expertise with weapons, you’ll be able to swiftly reload, swap, and fire your guns. Even fans of playing solo will love this character as he is one of the best in that field. Axton does not rely on teams and can carry the whole game solo. If you truly want to learn Borderlands 2, pick Commando, and you’ll learn all the basic mechanics.

On top of that, his unique class ability is the Sabre Turret. As the name suggests, you’ll place a turret on the ground, and it’ll start shooting at the closest foe. You can use the turret to force enemies to draw aggro towards it, so they do not attack you. This allows you to move around freely without taking any damage. It also allows you to regain your shields and fire from the side.

Much like the Commando class, you have the option to summon a giant floating robot that draws aggro and fires at the nearest enemy. Gaige was introduced in a DLC and is perfect for players that prefer going in guns blazing. She has tons of explosives in her arsenal and can destroy giant bosses easily. Mechromancer mostly deals with shock damage which is ideal when taking out enemy shields.

One of the major reasons Gaige is considered superb is because of her ability, Anarchy. She gains 1.75% damage for every kill and empty magazine. This can stack up to 400 times, but you’ll have a 1.75% accuracy reduction while gaining attack damage. While your damage will be extremely high, it is difficult to land shots on a target. However, when you are facing bosses, this won’t matter as you’ll mostly be in point-blank range, and your bullets won’t miss.
Plus, she is excellent in solo play due to her abilities and high damage. You’ll only have problems against a few bosses due to the lack of accuracy, but overall, she’s a blast to play with.

Finally, let’s talk about the Borderlands 2 Best Class. Salvador the Gunzerker is a beast of a character that shreds through enemies without any problems. The best part? You can dual wield any gun allowing you to equip various weapons to make insane combos. A particular nasty exploit allows Salvador to be potentially unkillable.

The Grog Nozzle deals additional damage to enemies while healing you for about 65% of the damage dealt. While having that gun equipped, you can equip another strong weapon that deals tons of damage to any enemy standing in your way. You can quite literally outpower any enemy and go through the entire game without any issues.

I would go as far as to say that the Gunzerker is a superior version of the Commando. Players can destroy waves upon waves of enemies without breaking a sweat due to some creative combos when you dual wield. Salvador is sublime in close-range fights and thrives in smaller areas. However, in large open areas, you’ll notice that you are not that effective against enemies. This only adds to the challenge and does not ruin your gameplay by any means.

That brings us to the end of our guide about the Borderlands 2 Best Class. While I prefer the Mechromancer, the Gunzerker is the overall better choice for all types of players. At the end of the day, you should choose the class that suits best with your playstyle. These are extremely fun characters with some great unique abilities and can change the entire gameplay experience.

Let me know in the comments below which class do you like and why. For more Borderlands content, check out the Borderlands 3 Best Grenade.