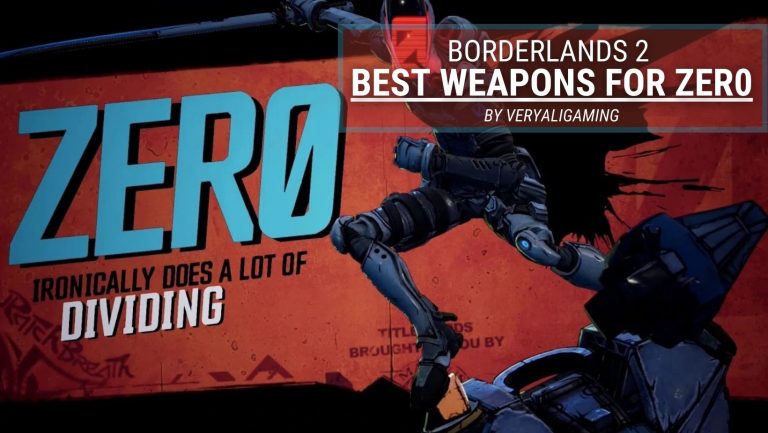 Out of all the weapons available, finding the optimal one can be troublesome. This guide will show you the best weapons to try out with Zer0 in Borderlands 2.

There are tons of various combinations of weapons/builds you can try out in Borderlands 2 for each character. Out of the six best unique Borderlands 2 classes, Zer0 – or better known as the Assassin – is a difficult character to play due to his low HP. There are many weapons that you can equip for him to work at his full potential. Let’s find out what are the Borderlands 2 Best Weapons for Zero.

Zer0 is a favorite fan character preferred by many veterans, especially if you are playing as a team. That is where this class truly shines since enemies will focus on your frontline, and you can deal tons of damage.

There are two main ways in which you can play Zer0. You can either focus entirely on the melee aspect of his build or use long-ranged weapons like the sniper. This guide will be focusing on the sniping part, and the stat distribution will be mentioned accordingly. If you are playing as a sniper, Zer0 isn’t dependent on getting good gear since you won’t need it. Let’s break down this build and get into the details.

This will allow you to deal insane damage from your sniper rifle and land good critical strikes. Once Bore is fully upgraded, you will be able to see all the enemies’ weak spots. This makes it easier for you to land critical hits and instantly kill the majority of your foes.

Plus, once Critical Ascension is maxed out, you will see the large weak spots of bosses. You can damage these spots to take down the bosses swiftly. This build is ideal if you want to focus on sniping from a distance and land good critical strikes.

Since you cannot fully upgrade all of the skill trees, you will have to distribute the rest of your stats to the other two upgrade trees. For Cunning, I suggest going for Fast Hands 5/5, Ambush 5/5, Rising Shot 5/5, Death Mark 1/1, Unforeseen 5/5, Innervate 5/5, and Death Blossom 1/1.

Upgrading the Cunning tree will allow you to reload faster and deal increased amounts of damage. Plus, you can even try using a shotgun or any other close-range weapon due to enhanced melee damages. Having a shotgun equipped at your secondary will be useful as you’ll be able to deal with enemies that get close to you. Not only that, but Cunning also helps you with sniping as your damage will be increased, and the reload speed is fast.

Finally, for Bloodshed, go with Killing Blow 5/5, Grim 5/5, and Followthrough 5/5. Putting points into Bloodshed is good especially since it enhances Zer0’s melee ability and gives you various buffs when an enemy is killed.

Now that we have discussed the stat distribution of Borderlands 2 Best Weapons, let’s talk about what weapons are good for Zer0. There are tons of snipers to choose from barring the four mentioned below are the cream of the crop. They are useful in any situation, whether you are facing a boss or dealing with waves of enemies.

The Longbow is considered one of the best sniper rifles against human enemies. Not only does it have a 98.1 accuracy rating, but it also deals tons of damage as well. The fire rate and reload speed can use some work although the rest of the features makes up for it.

It has an insane 170% critical hit damage which can take out almost any enemy with one bullet. However, the accuracy isn’t something to brag about since it comes with a -50% accuracy de-buff. However, to counter this problem, it has a passive that increases accuracy every time you fire the rifle. While you start off with bad accuracy, you’ll eventually notice it improving after every shot.

Longbow is a great choice for a medium-range rifle but lacks when using it at longer ranges. This is because it does not have a scope and the damage falls off at long-range distances.

The Commander Lilith DLC brought a plethora of weapons along with new enemies and a brand-new story. One of those weapons includes a sniper called Amigo Sincero. The scope of this rifle is extremely accurate, which means that you won’t miss the majority of your shots.

This sniper is one of the best choices when you are planning to do the sniping build for the Assassin. While it has an excellent fire rate, its tremendous damage makes up for it. Plus, you have the option to switch it to the semi-automatic mode, which allows you to deal even more damage. Due to the highly accurate scope, even the semi-automatic mode is superb.

Finally, the best feature of this excellent sniper is its ability to go through shields. No matter what type of enemy you are facing, you can use this rifle to bypass the shield. This allows the player to shred through some of the bosses which have tons of shields.

Moving on to another legendary sniper, the Pitchfork. This rifle deals an even higher amount of damage than the previously mentioned Amigo Sincero. On top of that, it has a great accuracy rating that allows you to hit enemies consistently, even from long-range.

Not only that, but the magazine size is also quite decent, which means that you won’t have to reload the rifle after every shot or so. However, this gun uses many bullets, so make sure to stock up on ammo before heading out for your adventure.

To find this sniper, you have to defeat the Terramorphous. While it’s not a guaranteed drop, you can try repeatedly until you get it because it is worth it. Plus, it deals with elemental damage, which makes it even stronger against certain enemies and bosses.

Lyuda – or White Death – is the best sniper rifle available in Borderlands 2. Having fantastic power and accuracy, this rifle does incredible amounts of damage. So much so that you can one-shot most enemies in Borderlands 2. Once fired, the recoil is quite stable, and you won’t face any difficulties lining up the next shot.

Plus, the 125% critical strike bonus allows you to destroy any foe standing in your way. Another cool feature is that a single bullet can disperse into three further shots. This not only deals additional damage, it means that you are firing three bullets at the cost of one.

That’s not all though, it has an automatic firing mode which makes it more of an assault rifle than anything else. However, if you hold the trigger, you are bound to miss some shots, but if you fire it like a burst rifle, you’ll do just fine.

Now that you are familiar with all the stats and weapons, I recommend equipping snipers in all 4 inventory slots. Doing so will ensure that you never lose your Critical Ascension stacks and improving your overall effectiveness. The four mentioned rifles are extremely viable and can take you through the entire game without any issues. As far as the other gear goes, such as grenades or relics, you can equip whatever suits your style. Speaking of grenades, check out this Borderlands 3 Best Grenade guide as well.

That about does it for our guide about the Borderlands 2 Best Weapons for Zero. Let me know in the comments below what your favorite sniper rifle is and why.