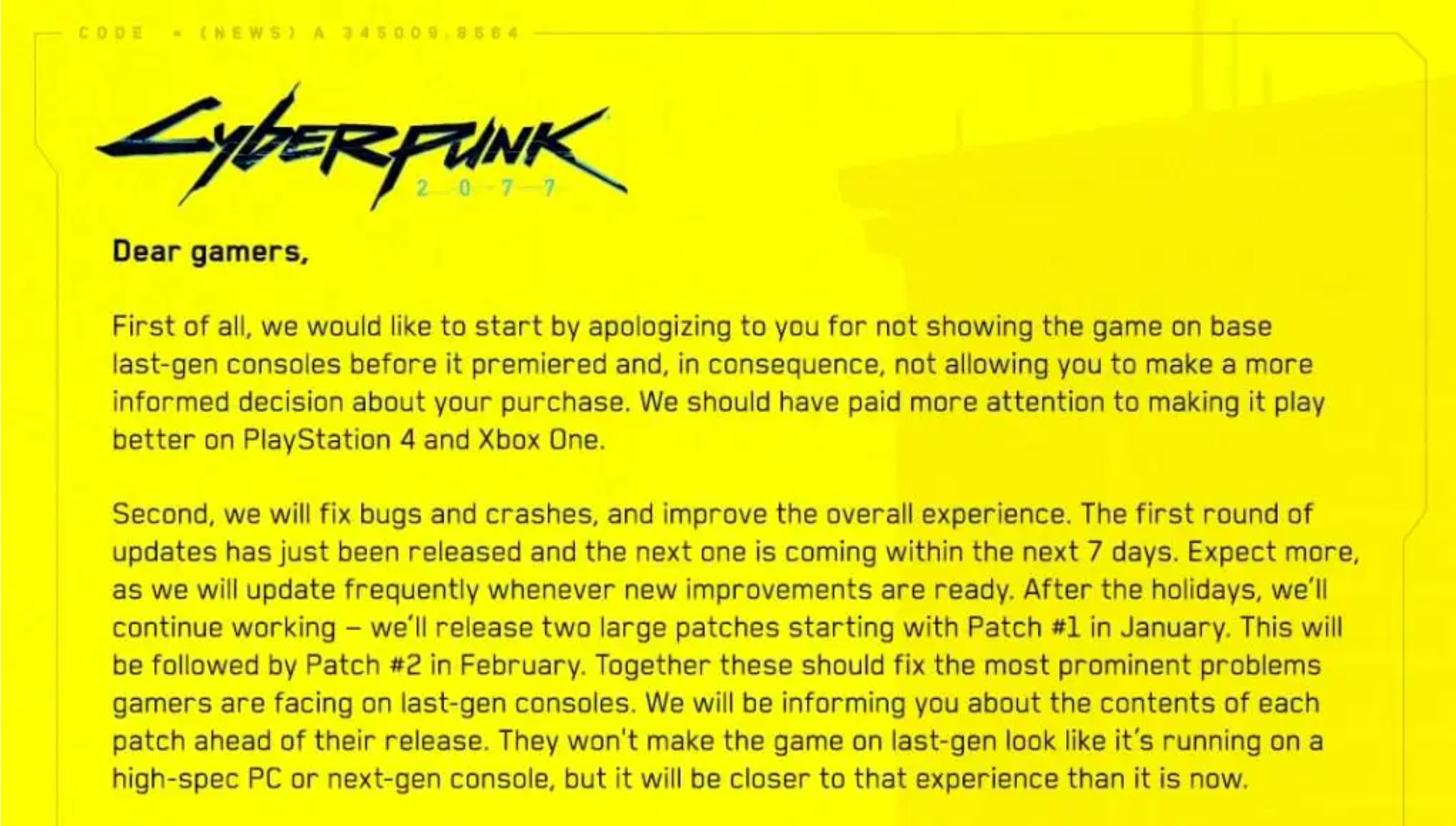 The launch of this year’s most anticipated game, Cyberpunk 2077, has been far from smooth. Despite this game having some of the most interesting quests and characters in recent memory in addition to an enormous city to explore, chalked with life and intrigue. It seems that this ambition from developer CD Projekt Red has brought just as many problems as it has successes. (Get Cyberpunk 2077 for only $49.94 !! here or here )

The problems being that this title is not as advertised on last-gen consoles. The PS4 and Xbox One iterations of this game offer a much poorer experience than their next-gen counterparts. Frame rates are unstable, crashes are fairly regular, visuals are significantly worse than those shown in the marketing campaigns for this title. Plus, much like the other versions of the title, there are a laundry list of bugs and immersion breaking glitches littered across Night City.

Due to the aforementioned issues, it seems that CD Projekt Red are ready to hold their hands up and take responsibility. In a statement released recently by the leads on this project, including lead director Adam Budowski, the company addressed the fans. In the apology, the company said sorry for not showcasing last-gen versions of this title before launch day, promised a swift response to produce two patches for the title in January and February, respectively. Then finally, the company ensured that all those unhappy with their purchase would receive help to refund the copy if that was their choice.(Get Cyberpunk 2077 for only $49.94 !! here or here )

“First of all, we would like to start by apologizing to you for not showing the game on base last-gen consoles before it premiered and, in consequence, not allowing you to make a more informed decision about your purchase. We should have paid more attention to making it play better on PlayStation 4 and Xbox One.”

“Second, we will fix bugs and crashes, and improve the overall experience. The first round of updates has just been released and the next one is coming within the next 7 days. Expect more, as we update frequently whenever new improvements are ready. After the holidays, we’ll continue working – we’ll release two large patches starting with Patch #1 in January. This will be followed by Patch #2 in February. Together these should fix the most prominent problems gamers are facing on last-gen consoles.”

“We will be informing you of the contents of each patch ahead of release. They won’t make the game on last gen look like it’s running on a high spec PC or a next gen console, but it will look closer to that experience.”

“Finally, we would like everyone that buys our games to be satisfied with their purchase. We would appreciate if you give us a chance, but if you are not pleased with the game on your console and don’t want to wait for updates, you can opt to refund your copy.”

The statement then goes on to instruct those who wish to get a refund on how to do so. Of course, CD Projekt Red have been no stranger to making public statements regarding this title. With both of the game’s major delay announcements coming in this format. Although, it has to be said that many companies wouldn’t have taken responsibility for their actions and remained silent, so for that we commend the developer.

Far From The Finished Article

Cyberpunk 2077 arrived on the scene and immediately came itself a mountain to climb. The gaming community were hyped for this title. The marketing for this game was a huge success and the title raked in 8 million pre-orders before launch day. So when the game arrived with bugs aplenty, visuals that are laughable and frame rates that make the game impossible to enjoy at times. It was bound to ruffle a few feathers and consequentially, many have lost trust in the studio, with their stock dropping 29% since launch day.

Even before this apology, the Sony Playstation Store, a retailer notorious for its poor refund procedure had already began offering refunds for those who purchased a digital copy of Cyberpunk 2077, perhaps showing the sheer magnitude of the problems this game faces. We hope that CD Projekt Red can recover from this situation and mould Cyberpunk 2077 into the experience that we were dreaming of before launch day.(Get Cyberpunk 2077 for only $49.94 !! here or here )

So that’s the news regarding CD Projekt Red’s apology statement. What do you make of this? Will you be holding onto your copy until the fixes come? Are you already in the process of requesting your refund? What have your experiences with Cyberpunk 2077 been like? Let us know in the comments section below. Plus, if you want to see more like this, then why not check out our news regarding Super Smash. Or alternatively, how about some more Cyberpunk related news?