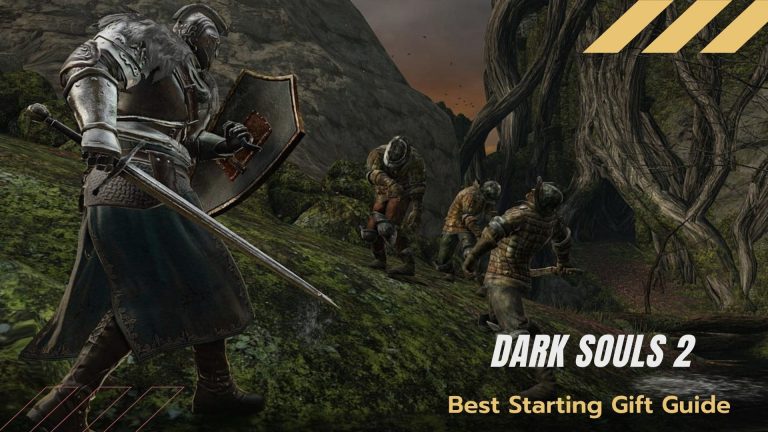 Starting gifts has always been a hot topic while starting all three of Dark Souls games, and it is still an interesting subject while starting . All three games give players an option to choose one gift while selecting or creating their character of choice and class at the beginning of the game. While no item is useless, especially in the early hours of the game, there are still better best gift players should go with so as to get the most of these items early on.

Players will come across a selection of eight starting gifts in , with only one to select and begin the quest of The Bearer of the Curse. Since all items have their respective uses and limitations in the game, there are a few that can be absurdly good and valuable from start to mid or even end game. While a few starting gifts being consumables in nature are bound to run out as early as in the first hour of the game.

That being said, we have categorized all starting gifts in based on their usage and the value they offer to The Bearer of the Curse. The ranking of starting gifts we have made is entirely based on our experience in , and it can vary from player to player. This is why debating or questioning our ranking is entirely not up for further discussion.

Yes, you read that right. Players have complete freedom not to pick any starting gift and still can play the game. Nothing is also an option in the list, but imagining anyone picking that is pretty hard. Mostly, the veteran souls players who love to challenge their skills are the ones who do not pick any starting gift.

If you fancy the extra challenge throws at you from the get-go, then picking up the Nothing option will not offer you any starting gift. It will throw The Bearer of the Curse to venture the Drangleic and fight monstrosities based on pure combat skills. So, going with this option will be challenging, and you are likely to die more than if you had a starting gift. But then again, it entirely plays out how you want to experience your first playthrough of .

The Homeward Bone is a common item that can be found in many places, so picking it as a starting gift would be a tad bit absurd choice. This item allows The Bearer of the Curse to get out of tight and dangerous situations by returning the player o the last place where you lit your bonfire for rest.

The Homeward Bone is exceptionally useful for new players who have never played Dark Souls game before. Imagine having more than 5000 souls in your first run without dying and encountering a strong and unbeatable foe. In this situation, it would be wise not to engage in combat, resulting in death and losing valuable souls. This is where Homeward Bone comes into play, as using it will take you back to the last interacted bonfire.

While Homeward Bone is one of the best best gifts, its usage is limited for the time when you accumulate too many souls and try to escape a strong enemy. This is why we think this starting gift does not offer enough value as compared to the other ones in the game.

Human Effigy is a common item in that can be found at various locations and is easy to find. This item returns a hollowed to life and removes the health penalties. Human Effigy turns The Bearer of the Curse back from a cursed state to a human one.

This item has multiple uses, and arguably losses value quickly after it is consumed. For starters, the Human Effigy can be burned at a bonfire to deactivate direct multiplayer interactions, which means players can no longer summon other players to get help in boss encounters or clear our tough areas. It also limits, albeit does not stop, the PvP invasions entirely. Other than that, it gives back the lost health bar, which gets penalized every time your character dies in and becomes cursed. The reverse hollowing works a little differently than the first Dark Souls game. It only increases the health bar back to 100% of your vitality level, but it does not replenish back health. While getting back the health bar to its full limit can be a valuable thing to get at the early hours in the game, the limited item in your possession means you are likely to run out by consuming Human Effigy in the first couple of hours in the game.

Keeping all these things considered, we think the Human Effigy is a valuable item in , but it is likely to run out pretty early in the game since it is consumable. Moreover, you can always buy this starting gift as a stand-alone from Merchants. Merchant Hag Melentia, Magerold Of Lanafir, Darkdiver Grandahl, and Grave Warden Agdayne are a few merchants that sell Human Effigy in limited quantities at variable souls price.

The Life Ring is a pretty basic starting gift in . It increases the overall health points by five percent, which is not much for a starting gift or mid to late game. However, this ring is one of the best gifts because it stays with the character for the rest of the playthrough, unlike other gifts that are consumables and will run out in the first couple of hours in the game.

While the five percent increase may not seem much, it is still a valuable offering if you want just a little bit more extra health points in the early game. Moreover, if you do not pick Life Ring as a starting gift in , acquiring this item later in the game is not an easy task. Keeping all things considered, many players prefer picking this starting gift other than the ones mentioned above.

Seed of a Tree of Giants

Seed of Tree of Giants is a one-time use item that is consumed after it has served its purpose. This starting gift allows The Bearer of the Curse to make enemies aggressive towards invaders. However, if you have Blue Sentinels coming to aid you during an invasion, using the Seed of a Tree of Giants also makes enemies hostile towards Blue Sentinels. While this starting gift acts as a double-edged sword, its limited usage makes it less valuable and a below-average gift in . It is an uncommon item that can only be found in the Forest of Fallen Giants.

This gift is also one of the best gifts and is useful to the players that have just begun their Dark Souls II journey. It reassures you of the chances of survival and provides many different healing items. Picking up the Healing Wares gives you a bundle of healing items that replenish the health points (HP) and cure poison and other ailments.

Other than that, this starting gift can be burned at the Majula bonfire, and in return, you will receive Moon Butterfly Armor Set, which reduces the amount of damage you receive by falling, and it also lowers the falling speed as well.

This leaves us with Petrified Something as best gift. This starting item may not seem a valuable gift based on its item description, but if you come to know the uses of it, you are likely to pick it not only in NG but in NG+ and NG++. Dyna & Tillo, the twin sisters, residing in the Things Betwixt area, are the ones that reward you valuable high-tier items in exchange for Petrified Something.

One of the many reasons this starting gift is most picked is that you can access Things Betwixt very early in the game, and trading Petrified Something with Dyna & Tillo allows you to overpower The Bearer of the Curse very early in the game. All you need to do is stand on a nest, and you will hear crows squawk. When you drop Petrified Something, you get random high-tier item drops. Titanite Slab, Petrified Dragon Bone, Old Whip, White Ring, Demon’s Great Hammer, Channeler’s Trident, Twinkling Titanite are some of the known random drops players get after trading Petrified Something with Dyna & Tillo. All of these items add a tremendous value to your playthrough and significantly increase the chance of survival, especially in the early game. It is also the reason we think this is by far the best starting gift in the game.

Now that you know about all starting gifts in Dark Souls 2, we have a couple of recommendation that suits each class in the game. Even though you can pretty much pick any starting gift with the classes, there are a few that offer a little bit more value with each class. Otherwise, you can always pick Petrified Something, Healing Wares, and Bonfire Ascetic regardless of the class you pick.

That is pretty much everything you need to know about best gifts. Which starting gift has been your favorite in the game? Let us know more of your thoughts in the comments section below.