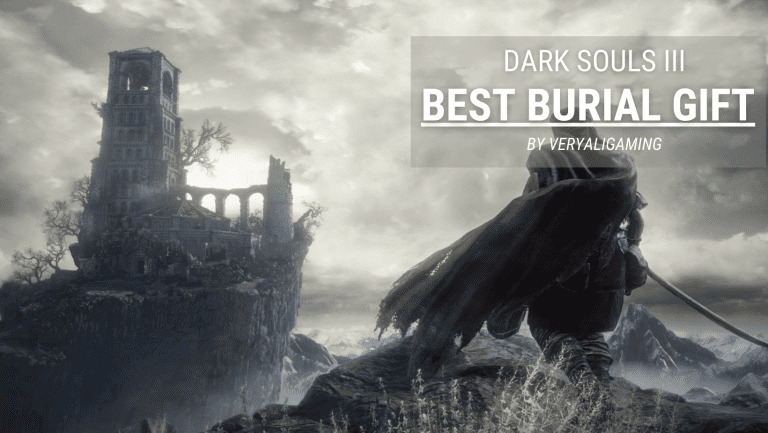 Out of the nine burial gifts, finding the right one can be difficult. This guide will assist you in making the correct choice.

When you first start , you’re allowed to select a burial gift as part of the character creation process. You have an option to select nothing at all, but why would you pass up free loot. Today’s guide will be all about Best Burial Gift.

You are given nine options to choose from, and much like previous installments of Dark Souls, there are some standout options. Much like various builds and weapons, you can try out these gifts to find the ideal one for your playstyle.

With that being said, let’s dive right in the guide and find everything about the Best Burial Gift.

In Dark Souls 1, the best burial gift was the master key, and in , it was Petrified Something. While there is a burial gift which I recommend, there isn’t an obvious choice like the previous entries.

First up, we have Life Ring. This ring raises your maximum health points by 7% when equipped. The item only weighs 0.3 which means that you will not have any issues carrying it around. Do note that it has to be equipped for the passive to work.

Since it is percentage-based; the more Vigor you have, the more beneficial this item becomes. This is a solid choice for a starting burial gift as it’s an item you’ll have through the entirety of the game. You can benefit from it immediately from start until you find a suitable replacement later in the game. There are tons of phenomenal rings to choose from as the game progresses.

It certainly improves your chances of survivability and is most suitable for newer players. You can find multiple Life Rings scattered throughout the world of and can even purchase one from Shrine Handmaid. Many players don’t get this gift as you can pick it up later on, but the increased health is crucial for the early game.

Next, we have Divine Blessing, a single-use consumable that fully restores hit points and cures ailments. While Divine Blessings are great to have and they exist in limited quantity, I don’t like to recommend single-use items unless the benefits are long-lasting.

Plus, it isn’t a good item to have for start of the game anyways. Since you cannot get bleed, poison, or other ailments; it doesn’t come in handy until much later. Still, getting other gifts that can last for potentially the entire game is more beneficial than this.

Hidden Blessing is a similar choice to Divine Blessing. It will fully restore your FP, but it is also a single-use consumable, not something I’d suggest using. As mentioned for Divine Blessing, this doesn’t come in handy at the start of the game. If you are planning on doing mana-based builds – like the faith build, this can be useful later on, there are still better options to choose from.

Moving on towards the first and only damage-dealing burial gift in . These projectiles can be equipped on your utility belt and can be thrown using the action button.

They deal heavy damage to enemies – especially those that are weak to fire. As I stated before, items that are beneficial for a limited time can be dubious; this is an exception to that. Black Firebombs are exceptional against Gundyr – the first boss you face. It will help you defeat him swiftly without much hassle.

You receive a total of five bombs – all of which get used up in the Gundyr fight if you decide to use them. However, veterans of the game should not pick up this gift as you can find excess firebombs all over the map. If you are stuck on the first fight, then – and only then, should you choose this burial gift.

Fire Gem is often the player’s favorite choice to start with, in . It is an upgrade material and very beneficial to have this early in the game. It will infuse your melee weapon with fire damage; however, it will remove any scaling effect of that particular weapon. I suggest using it on a weapon that already poor scaling to negate the effect.

Everything is not so convenient, however. You must also collect Coal and give it to the blacksmith to infuse your weapon of choice. Other than that, you get this item after defeating the fire demon in Undead Settlement.

It is a consumable item that adds 2000 souls to your currency pool once used. If you decide to select the burial gift, I suggest using it only when you need it, as it’s always protected in your inventory.

This consumable is especially useful if you plan on leveling up early on in the game. It would be best if you held onto the gift until you unlock the ability to level up; otherwise, it can prove quite fatal. Regardless, farming souls is relatively easy if you know what you’re doing. Despite giving a relatively decent head start, the advantage is so minuscule that it isn’t worth the effort.

Rusted Coin is the worst choice to start aside from choosing nothing at all according to many players. Once again, this is a consumable that lasts 60 seconds and enhances your item discovery rate. That is hardly a benefit in terms of time.
You would be unlikely to care to use this so early anyways. Everything is not all bad, however. You get a total of 7 Rusted Coins – which gives us a total of 420 seconds of increased item discovery.

If you decide to choose this gift, keep in mind that it is better used in the late game than the start. Later on, you can find great items located in difficult-to-spot areas with the help of these coins. The Gold Coin can also be purchased from Firelink Shrine, so it’s not worth choosing this one.

You’ll find more use out of other selections than the Cracked Red Eye Orb. While you get 4 orbs right off the bat, they can be easily acquired later on. You can even get some from Firelink Shrine as a gift. Getting into PVP this early is not recommended, so it’s better if you select from other options.

Finally, the last burial gift in is Young White Branch. It is yet another single-use consumable that transforms you into an object blending with your current surroundings. Imagine a sort of chameleon effect.

It’s definitely fun but not a wise choice due to its overall value. This item can be found near the Dilapidated Bridge bonfire. This gift is crucial if you want to befriend the giant in that area so it stops throwing projectiles towards you.
You only receive one White Branch as a burial gift but can get up to three from the bridge.

So, after all, is said and done, most players feel like only has 2 viable options –Life Ring and Fire Gem. Since every player has a different playstyle, you might find other burial gifts more suitable. Try out all of them in your various playthroughs and find out which one is ideal for you.

That about does it for today’s guide about Best Burial Gift. Let me know in the comments below which one is your go-to gift and why.