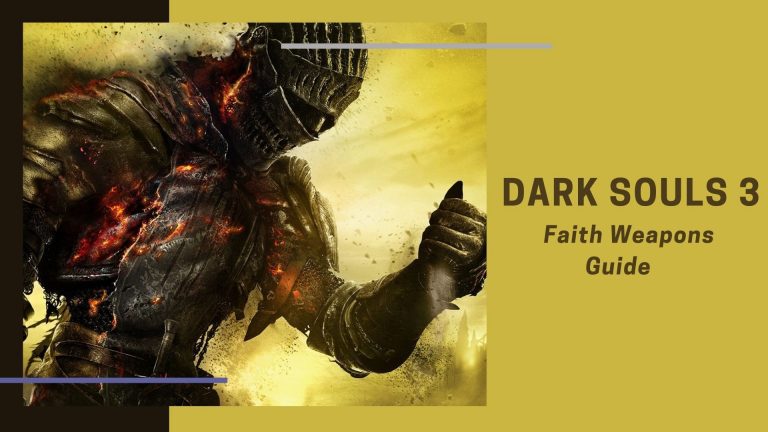 is the third iteration in the Souls series of video games that continue the same formula but offer much more than its predecessors. Released by FromSoftware and Bandai Namco Entertainment, the game was launched on PlayStation 4, Xbox One, and Windows PC in 2016. has tons of weapon types, each having unique weapon art. Regardless of what weapon type you go with, faith weapons are a tad bit better than the others when it comes to killing NPCs in PvE or dominating online players in PvP.

Players can create unique builds with such a wide variety of weapon and armor types in . One can go for the luck build, quality build, or the PvP-based Katana build. Of course, creating builds will require the Ashen One to be at a certain level in order to wield particular weapons and wear certain armor pieces. This is achieved pretty easily by farming souls. Even after all that, you may need to have a big health bar and a good number of Estus Flasks to keep replenishing the lost health, and that is why locating the Estus Shards must be kept a priority from the first playthrough.

Like our Dark Souls 3 Dex Weapons and best Staff guide, we have come up with ten faith weapons in the game that offer a good value. All of these weapons are the absolute best when it comes to fighting NPCs or dueling the phantoms in .

One of the many benefits of wielding Great Corvian Scythe is that it can be infused with any infusion. Thus, making this weapon a go-to weapon in nearly every single build in . This weapon is an excellent pick for PvP. This weapon has a Dark infusion that allows an Ashen One to pierce through shields and slash enemies quite conveniently. This weapon is not the best pick for PvE, although it gets the job done. So, make sure you know when and where you need to use this weapon.

The Great Corvian Scythe requires 16 Strength and 18 Dexterity levels. Other than that, one can find this weapon in the Road of Sacrifices, the Untended Graves, and the Grand Archives areas. Corvians creatures mostly dwell in these areas, and they have a higher chance to drop this weapon.

Just like the Great Corvian Scythe, the Saint Bident spear deals average PvE damage. However, this weapon shines in the PvP department. This spear has a great reach; in fact, it has the best reach out of all faith weapons. Most spears in have the highest reach, and this is why Saint’s Bident is the most picked faith weapon in duels and Undead Matches. This weapon can be infused, and hence the overall damage can be significantly increased.  So, infuse this weapon and buff the damage if you are rocking a faith build in while running with a Saint’s Bident weapon.

In order to wield the Saint’s Bident weapon, an Ashen One must have 12 Strength, 12 Dexterity, and 16 Faith levels. Other than that, the Saint’s Bident can be found inside the Cathedral of the Deep. It’s precisely located beside one of the chained giants, the one near the blue door. Players need to open the door and go down a stairway to obtain the weapon.

The Wolnir’s Holy Sword, just like the Saint’s Bident weapon, also has an excellent reach. If picking faith weapons is your jam, then this one will be a great choice to go with during the mid-game. In the earlier version of , Wolnir’s Holy Sword was not as powerful as it became after a series of updates. Most importantly, the spell casting time received a buff that made this faith weapon incredibly powerful in the game. Wolnir’s Holy Sword is not as good as other Faith weapons in PvP. However, its weapon art does excel at taking out large crowds of enemies in PvE.

Wolnir’s Holy Sword requires a minimum level of 13 Strength, 13 Dexterity and, 13 Faith. This weapon can be directly obtained by killing Wolnir boss and offering its soul to Ludelth the Exiled at the Fire Link Shrine. He transposes the boss’s soul and rewards the Ashen One with Wolnor’s Holy Sword. If you are into Boss Soul Weapons, check our guide as well.

Sunlight Straight Sword weapon is an excellent DPS weapon and deals a decent amount of critical attacks on enemies and PvP opponents. This weapon works similarly to the Sacred Oath miracle on a Faith build, and it buffs the wielder. Additionally, wearing a Hornet ring greatly increases the overall damage of Sunlight Straight Sword. On the subject of rings, check out our Dark Souls 3 Best Rings guide and learn the overall value of all rings in the game.

Furthermore, an Ashen One needs at least 12 Strength, 12 Dexterity, and 16 Faith to become worthy of wielding the Sunlight Straight Sword. The weapon can be easily obtained once players progress to the Lothric Castle. Once there, they need to kill the mimic chest located near the White Dragon.

This Sword Spear has an incredible reach. It is also the one-of-a-kind weapon with the most amazing weapon art and a unique moveset in the . Dragonslayer Sword Spear’s weapon art summons a lightning bolt from the sky whose attack is based on line of sight, so if the enemy is facing you, he will get hit immediately. Other than that, this weapon cannot be buffed or infused. Regardless of it, Dragonslayer Sword Spear is a stunning faith weapon that resonates well with Faith builds.

There are two ways to get Morne’s Great Hammer. One is to kill Eygon of Carim directly; once killed, an Ashen One can loot the weapon from the corpse’s body. This can be achieved very early in the game, but an Ashen One is likely not to have the required level to wield it. Also, it is not easier said than done; Eygon of Carim will destroy the Ashen One if he is made an enemy.

You May Find This Interesting: Dark Souls 3 Best Shield

The second and the easiest method is to loot the corpse of Eygon of Carim found inside one of the cells of Irina of Carim. This comes very late in , and by this time, an Ashen One can accumulate the required souls and level up to wield this weapon.

Moreover, before embarking on this adventure, an Ashen One needs to be in the emebered state; otherwise, the dark spirit will not appear. If you are short of embers, check out our Dark Souls 3 Ember farming guide.

The Dragonslyer Great Axe is a monster of a faith weapon in . It has an immensely powerful weapon art, which deals with enormous damage and decent AoE damage. At +5 and 66 Strength, when this weapon is two-handed, it deals a total of 729 damage on a single target. The Dragonslayer Great Axe needs a 40 strength of an Ashen One to be wielded with both hands.

The weapon can be obtained near the end game. After killing Dragonslayer’s Armour, offer the boss’s soul to Ludelth the Exiled, and he will transpose the mighty soul into the Dragonslayer’s Great Axe weapon.

Crucifix of The Mad King

The Crucifix of The Mad King is one of the difficult to master Faith weapons. It has a unique weapon art that differs from most of the weapons belonging to this weapon category. Crucifix Of The Mad King weapon deals Dark Damage by default and amplifies the overall damage to a greater extent. In order to wield this weapon, an Ashen One needs to level up 19 Strength, 10 Intelligence, and 14 Faith points.

The Lothric Knight Great Sword is arguably the best faith weapon, not because of one, but for many reasons. The insane amount of damage, charged or uncharged, is the first reason why Lothric Knight greatsword receives so much love from Ashen Ones. The second being that it can be infused or buffed with blessed and lightning elements. However, one must always buff Lothric Knight greatsword with the lightning buff. It is because both the blessed and lightning buff deal the same amount of AR.  But the blessed buff requires more grinding to unlock, thus making it less valuable.

In order to wield the mighty Lothric Knight Greatsword in , an Ashen One need to have at least 24 Strength and 16 Dexterity. There are three ways to obtain this weapon in :

That is pretty much everything you need to know about Faith Weapons. Out of these ten faith weapons we mentioned above, which one is your favorite in the game? Let us know more about in in the comments section below.