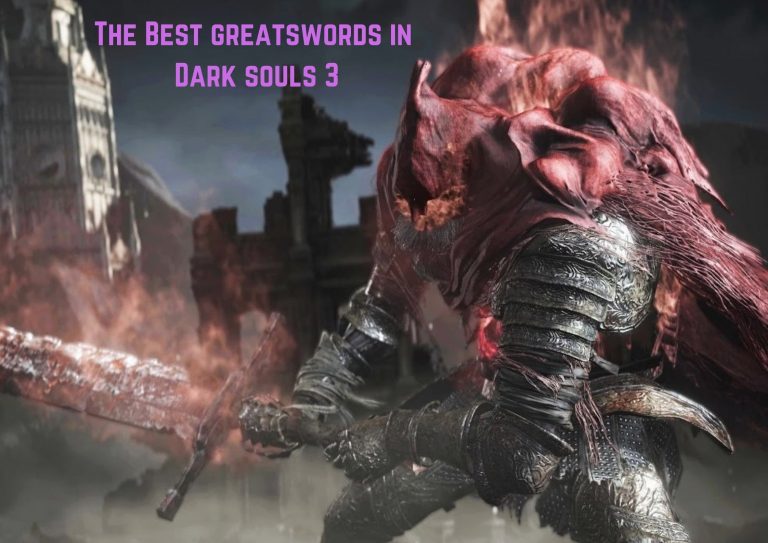 offers a great variety when it comes to weapons. From ultra greatswords to great bows, has it all. One such weapon type is the greatsword, greatswords are excellent weapons that usually scale with Strength, Dexterity or both, making them great for strength, dex and quality builds. Greatswords, due to their versatility, unique movesets and high damage outputs are one of the greatest and most fun weapons for melee players in .

Greatswords also range from basic greatswords to unique or boss soul greatsw0rds that are both very aesthetic and often come equipped with unique attacks that have very cool effects and damage elemental damage. Greatswords are also very reliable and almost every greatsword in , barring a few, is beginner-friendly. This guide covers what we consider to be the best greatswords in . We hope you find this guide useful, for more guides, check out Best Dark Souls 2 Weapons and Dark Souls 3 Katana Builds.

This is where Greatswords shine, their versatility makes them exceptional learning weapons for people transitioning to a strength or quality weapon and can help such people into easing into such builds.

Greatswords in , due to their relatively quick hitting times are also good for all sorts of encounters in the game. From tough bosses like midir to a 1V1 PvP encounter, greatswords shine everywhere. While every greatsword is different from the next, almost all of them make for great PvP and PvE weapons. Most Greatswords also have unique L2 attacks that are pleasing to look at and often dish out insane amounts of damage. They also offer a lot of range, which, combined with their damage, makes them very powerful weapons in .

The Claymore is arguably one of the greatest and most beginner friendly weapons in . When it comes to Greatswords, the claymore has a lot to offer. Claymore, thanks to its high damage output, strength and dex scaling and its excellent moveset is an exceptional weapon in . This Greatsword is good for beginners choosing to go the quality route, although it can be infused and turned into a weapon suitable for almost any sort of build, some of our favourite uses of the claymore are using it with a pyro melee or a melee mage (check out our mage builds guide) build.

You can acquire the claymore in Irithyll valley, it is dropped by enemies that wield this weapon. Claymore requires a strength level of 16 and a dexterity level of 13 and has a D scaling for both. It can be infused and buffed. We recommend a strength and dexterity level of at least 35-50 in order to maximize claymore’s damage. While it is an early game weapon, this Greatsword can easily take you through multiple playthroughs of the game. It is reinforced using titanate.

The claymore excels both in PvE and PvP. Its high damage output, relatively low stamina consumption and moveset make it an excellent all rounding greatsword in . From hoards of ads to an invasion by two people, the claymore has you covered. The range, coupled with its ability to be infused are added bonuses. The Claymore is also great both single handed and dual wielded. All in all, the claymore is an excellent weapon in that excels in almost all sorts of encounters.

A weapon for fashion souls and a must have for every pyro melee build (check out our pyromancer builds guide), the Onyx blade is one of the flashiest and best greatswords in . Onyx blade is a Pyro greatsword that comes equipped with a slick design, insane moveset, great range and some of the coolest and best weapon arts among all greatswords. It also has a weapon art buff that lasts very long and consumes little FP, relatively speaking.

Since the Onyx Blade is a DLC weapon, you need access to the painted world of Ariandel DLC. There you will come across an NPC enemy, Sir Vilhelm, who wield the Onyx bade, beating him will give you access to this greatsword. It requires a strength level of at least 14, a dexterity level of at least 12 and faith and intelligence levels of 15 each. It has strength, dexterity, faith and intelligence scaling of E, E, D, D consecutively. Since this weapon causes Physical, Fire and Dark damage, we recommend this for melee Pyromancers with intelligence and faith of at least 40 each.

The moveset on the Onyx blade is similar to that of Gael’s greatsword, meaning it deals a lot of damage relatively quickly. The weapon art on the Onyx Blade weapon art is especially strong. The weapon art, Elfriede’s Blackflame, triggers a powerful animation, that can serve as an attack, that adds fire damage to the weapon for 45 seconds by consuming some FP.

Onyx blade is similar to the Dark Claymore in many aspects but offers more range and higher damage when buffed. The weapon art, combined with the moveset means the Onyx blade will crush whatever foe comes before it.

Due to its powerful moveset and almost overpowered buff, the Onyx blade is an exceptional all rounding greatsword in . Its ability to inflict tons of damage relatively quick makes it a great choice for every encounter. Its range means it will be great for PvP duels and invasions, helping out out manouever your foes, getting in and out of confrontation easily. The range and the buff means that in PvE, you will be getting through all kinds of encounters, from bosses to mini bosses to hoards with relative ease. All in all, if you are a pure pyromancer or a pyro melee build, look no further than the Onyx Blade.

Probably the most underrated greatsword in Dark Sous 3, the executioner’s greatsword is an excellent greatsword for quality players. This strike focused greatsword often gets overlooked, perhaps because people believe its alternatives to be better. The Executioners greatsword focuses on strike damage which easily staggers enemies, meaning this greatsword is gonna be very effective against most encounters in . It also comes with a unique L2, stomp, that can lead to strong weapon arts.

When it comes to the best greatswords, the Black Knight Sword is my personal favourite and a weapon that helped me get through the game more than once. The dual wielded Black Knight Greatsword is one of the most fun greatswords in . Not only does the Black Knight Sword hit quick and consume less endurance, it also comes with an L2 called perseverance, that greatly boosts poise and reduces damage for a few seconds, essentially making you a tank for a bit. The Black Knight greatsword hits almost like a normal straight sword while outputting far greater amounts of damage.

While a great PvE weapon, PvP is where the Black Knight greatsword shines. Its quick moveset and perseverance make this an excellent duelling option in . Triggering perseverance means your opponent will do the bare minimum of damage while not being able to stagger you at all, giving you time to interrupt their attack and stagger them instead.

Black Knight Greatswords quick attacks also mean it uses relatively less endurance, which is always a plus. While perseverance will not be as viable in PvE, the high damage output and moveset of the Black Knight greatsword still mean it makes for a great option for PvE in .

You can acquire Gael’s greatsword by transposing the soul of slave knight Gael, a contender for the toughest fight in the game. It cannot be infused or buffed. Gael’s greatsword requires a strength scaling of 19 and a dexterity level of at least 13 and has a C strength scaling, making it a strength weapon. It has a unique R1 L2 R1. Many unique combos can be created with L2 and R1/R2 thanks to this greatsword’s unique attack, blade of peril. It is reinforced using titanite scale. Its basic combo consists of strikes and thrusts.

What makes Gael’s Greatsword such a good greatsword in is how much it has to offer. It is a relatively light greatsword, which means it hits quickly. Couple that with its high damage and devastating combos and weapon arts, you get a weapon that can breeze through all kinds of encounters in .

While Gael’s Greatsword is an exceptional weapon for both PvP and PvE gameplay, it does lack a bit against large number of easier enemies/ads. Its high hitting speed and weapon arts make it a crushing PvP weapon. The L2 is hard to get out of once hit with, meaning Gael’s greatsword will provide multiple opportunities for tricking your enemy and getting them into a barrage of combos. All in all, this is a phenomenal greatsword.

What is the best greatsword?

All the greatswords in this list are solid contenders for being the best greatsword. The best, however, comes down to your preferences and the greatsword you have the most fun playing with. For example, I think the Black Knight Sword is the greatest for it was my main weapon for a very long time. Someone else, however, might prefer the Onyx Blade for they might be running a Pyromancer Build.

What is the best Strength Greatsword?

Our picks for the best Strength great words are Gael’s greatsword and Executiner’s greatsword, which are both, lore wise, the same weapons. Gael’s is more focused towards PvP and PvE while executioners is more of a PvE weapon. We also recommend checking out our list for the Best Strength Weapons In Dark Souls 3 and the best Dark Souls 3 Strength Builds.

Can only strength, dexterity and quality builds use greatswords?

While on the surface it may seem most greatswords are built for strength, dex and quality builds, no, almost all builds can utilize a greatsword. Most greatswords can be infused (check out our infusion guide), allowing them to add scaling depending upon their build, while others, like the Onyx blade, are geared for caster builds. All in all, greatswords in are a solid choice for all kinds of builds as long as you require a melee weapon in that build.