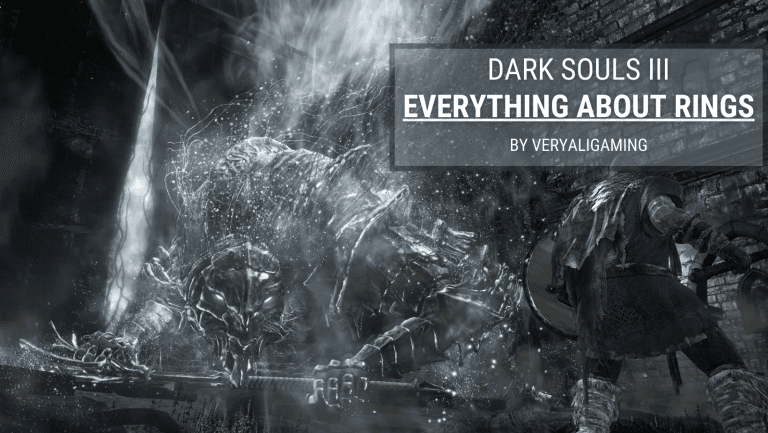 Rings are an integral part of invasions in Dark Souls 3. This guide will help you understand everything about them.

Calling , a difficult game is an understatement. Fans of From Software’s and Sekiro franchises know what to expect from their games. Finding and equipping rings in can help you out a great deal by making life a little easier for you. Today’s guide will take a look at the best rings.

You can find dozens of rings – 107, to be exact. Finding them all will grant you a trophy; so, if you are an achievement hunter, make sure to get them all. Furthermore, you can equip up to four rings at a time.

Hold on tight because we’re diving straight into what rings are the best and which ones you should equip to enhance your power.

Rings provide a series of passive effects. You can think of them as a way to shore up weaknesses and highlight the strengths of your build. Some rings will boost the build’s effectiveness, where others your keystones required for a builder’s success.

I will not be noting down all the rings; instead, I’ll list down some of the best ones viable on most invasions, even if they are situational. The smaller scope leaves a scant few rings to discuss; so, let’s get started.

It is great for keeping active during invasions. While it does take up a ring slot, it also provides you with extra stamina regeneration. The best part is that you won’t need to stop using it. The ring stacks with Green Blossoms as well, making you much harder to catch and makes it difficult for enemies to flee from you.

This might be the most incredible tool in an invader’s arsenal. The ring completely negates fall damage so long the fall wouldn’t be fatal at full HP. This dramatically increases your freedom of movement. If you are running from a gank squad, you can roll down a mountain or stairs without taking any damage.

You’ll rarely be followed after a long fall. If the enemy decides to jump after you, you can just hit them when they land. Even some shortfalls become highly useful. You can use the damage from the fall to whittle away at enemy players.

The Silvercat Ring isn’t just a defensive tool. You can even use it aggressively. If you are chasing an enemy player, you can use shortcuts that would otherwise take away your HP. It makes catching up to a player much convenient. I think this entry deserves a spot in best rings.

There are times when you can’t end an invasion in the first minute. Even if you quickly kill a player, it can take some time to reach the critical moment. Sometimes the host may flee, leaving behind phantoms. This is where the Sun Princess Ring comes into play.

It lets you recover a lot of HP over these longer battles. It is especially good with high absorption and flat defense, making each point of HP that much more valuable.

This ring is a staple for invaders. It is so ubiquitous and well recognized, making it almost a symbol for invasions. This is second only to the Red Eye Orb itself. It increases your damage dealt with a critical strike.

Most of the time it can assist you in finishing phantoms in one hit at full health. It is most viable at higher levels though – when your weapon AR increases sharply. The Hornet Ring easily pushes the resulting damage to the extremes. Many players use this ring to ensure they are never a moment away from victory, regardless of how many mistakes are made.

If you are at a lower level, this ring will be highly beneficial. It provides 5 levels of Vigor, Vitality, and Endurance for a bit less absorption. The extra health and flat defense somewhat mitigate the loss of absorption. You can also recoup some of the lost absorptions with heavier armor.

With this combination of stats and penalty, you can think of the prisoner’s chain as making your build better against light weapons. Your only concern will be against heavier weapons. Since you will have the absorption penalty, the heavy weapons will yield a bit more damage than you might like.

The Blue Tearstone Ring is a great filler ring to handle emergencies. You might want to have it equipped if you are regularly scrambling to recover after being thrashed by hosts and phantoms alike.

It only becomes active when you are at low health. If you are usually successful in invasions, you might want to swap to some other rings that are active regardless of your HP.

If you’re good with critical attacks, Aldrich Ruby can be a great fit for you. The free health it provides is incredibly valuable when invading. Every backstab riposte recovers a good chunk of your HP and can save Estus in longer battles.

The ring also helps recover some of the health lost to establish a critical strike in the first place.

Good invasions aren’t simply about the time spent engaging enemy players. A large portion of invasions is observation, posturing, or even taking time to regroup.

You have the complete freedom of retreating or engaging at will due to this ring. It’s often used to attack from afar. Arrows can hit without notice and a sudden crystal soul sphere quickly ends an unwitting phantom.

They provide a way to inject a bit of confusion into a group battle. Appearing as a host or phantom can add a slight bit of hesitation to player decisions and every lapse in judgment can provide a crucial opening.

Due to how player names are displayed, it’s easy to identify the player posing as host or phantom. You may find that these rings are best used on the other side of the encounter, rather than when invading.

The Untrue Dark Ring at least makes it harder to spot the invader at a distance. It eliminates the bright red color typically seen on an invader.

The rings discussed in this guide will go a long way to shore up your build, some even adding new abilities. As so few rings were talked about, they should only be viewed as a set of core choices. There are many other rings to try, but I found these to be generally impactful in invasions.

I hope you found this guide about best rings helpful. Please leave a comment about your favorite rings and which ones you prefer to use in the invasion.