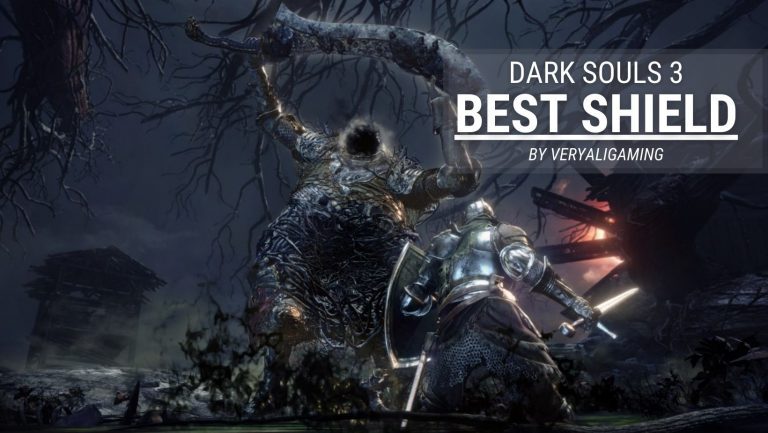 Having a good defense is the best offense. Which is why this guide is focusing on the best shields available in Dark Souls 3

provides players with ample freedom; allowing them to mix and match various builds to their advantage. Players can either use the Dex Weapons or choose a different path and try out the Quality Build. Those builds are viable and perform exceptionally well, but today’s guide will focus on the Best Shield.

Naturally, shields aren’t conventional weapons, but you’ll parry your way to victory if you choose the correct one. Whether it’s PvP or PvE, you will not be disappointed while using these shields. Since there are tons of shields in the game – 60 to be exact – this guide will list down the top 5.

Usually, swords and armor hog the spotlight, but some shields outshine even the best of swords. They are divided into three types: Small, Standard, and Great. No matter what type of shield you prefer, this guide has something for everyone.

Dark Souls games have always prided themselves on their rich lore. This shield links to King Vendrick from , making it a unique artifact. On top of that, it boosts soul collection by 20%, making it easier to go soul farming. This passive does not appeal to players in the later stages of the game, but this is a massive help early on. You can conveniently collect souls by equipping this shield alongside the relevant rings to level up your character.

Its usefulness doesn’t end there, however. This shield has decent stability, great damage reduction stats, and has a low weight. This allows you to stay under the weight limit and still have an excellent defensive tool in your arsenal.

The biggest downside is that this shield is not effective against fire-type attacks. If you face a boss that deals fire damage, you might want to swap this one for something else. Plus, it also requires a somewhat high amount of strength – 18 to be exact.

Overall, the upsides outweigh the negatives, and you should absolutely use this in your next playthrough. It will help you get out of the early game easily and make you stronger than usual due to the extra souls.

Let’s get the negatives out of the way first. This is the only shield in that has a negative effect. It reduces the player’s stamina regeneration by 20%, which is a huge deal. With that out of the way, this shield has the highest stability in the game – even including the DLCs.

There is a way to remove the debuff as well. You can upgrade it twice, increasing the stability of the shield to 100, consequently removing the stamina reduction de-buff. If you are planning to do the Faith Build, this shield is ideal for you. It gives tank stats as well as proves worthy for players preferring the use of magic.

There isn’t much else to say about this but definitely include this in your next faith build, and you will see a noticeable difference.

This shield has one of the most useful auxiliary skills in – health regeneration. Included in the DLC, the Oak Shield stands out from the rest of the bunch due to its remarkable qualities. Keep in mind that there are some amazing shields in the DLC, but this one is the absolute best out of them.

It comes in handy in the majority of the scenarios you can find yourself in. Having the stability of 50 – which could be better – provides phenomenal resistance against magic, lightning, and dark attacks. In short, it is useful against most enemies in the game as the majority of them deal the aforementioned types of damage.

However, much like the Shield of Want, you will want to swap it out for something else when dealing with fire-type attacks. Especially if you are facing the Old Demon King – notoriously a difficult fire-type boss – you will want to remove this shield since it would only cause problems. Still, the health regeneration passive and other stats more than makeup for its lack of resistance against fire.

Moving on to the second-best pick in , the Lothric Knight Shield is nearly flawless. It almost made it to number one, but you’ll see why it settled for the second spot. You can obtain this early on in the game when you visit the High Wall of Lothric. It has a high drop rate from the, you guessed it, Lothric Knights.

Fully upgraded, this shield has a stability rating of 66 and has massive resistance against lightning attacks. If you are going up against the Nameless King or the Dragonslayer Armour, this shield is your best friend. Plus, you can easily parry attacks with this as it gives the player a decent window of error making difficult fights convenient.

On top of all of that, you can also infuse this shield. While this isn’t a huge help, you can still get that additional FP or HP regeneration by infusing the Simple or Blessed Gem. As mentioned earlier, this isn’t the selling point, but the extra stats are never bad to have, especially when going against late-game bosses.

Finally, the number one pick for the Best Shield, the Black Knight Shield. Most players would have already guessed this as the entire Black Knight set is superb. Not only does it look cool, but it also delivers by having some of the best stats in the entirety of .

After you fully upgrade it, the shield provides a stability rating of 69. This is an extremely high rating and can save you tons of damage. It only has a weight of 7.5, which means that you will be able to easily fit this into your build without the fear of being overweight. The strength requirement is somewhat high, being 18, but it is absolutely worth it.

The only major downside I can see is that it does not allow the player to perform a parry. While that makes most people turn away from it, the rest of the stats justify its number one spot. This is the only shield on this list that is sublime against fire damage. Not only that, but it also has great damage resistances across the board.

You do not want to miss out on this shield because you are guaranteed to have a fun time using this. Another big plus point is that you do not have to un-equip it to use the main hand weapon’s skill. Usually, you will have to remove the shield to use the weapon skill but not in this case. Due to this, you have an advantage over your opponent’s, especially in PvP.

These are the best shield in , and you should definitely give them a try. Since the list includes shields of all types, you will certainly find one that suits your playstyle. While the Black Knight Shield is clearly superior, the rest of them are also worth the try. Depending on the type of boss that you are facing, you can equip the relevant shield to make the fight a bit easier.

With that being said, we are now at the end of the guide about Best Shield. Let me know in the comments below which shield is your go-to and why.