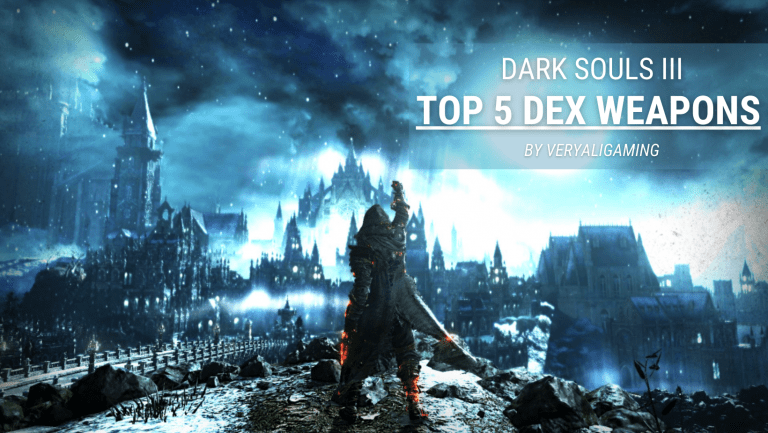 Dex builds are the meta in Dark Souls 3 PVP. Find out which weapons will help you compliment your dexterity build.

Dex weapons in , specially during Ember Farming rely less on the attack rating and more on patience and the right time to strike. Although they are not as much a heavy hitter as strength weapons when going for the quality build, they are commonly seen throughout PVP and PVE due to their swift move sets. Today’s guide will focus on everything about the Dex Weapons.

Since there are many great dex weapons, we will be discussing the top 5 best weapons instead of just naming one.
Please sit back, relax and let’s take a look at the top 5 Dex Weapons.

After spending hundreds of hours in the game doing PVP, I figured that the following are the best weapon of choice when it comes to dexterity builds. Keep in mind that these are my choice of weapons, and you may disagree with them.

This guide will only focus on the weapons and not the entire build. You can also check our guide about Dark Souls 3 rings to find the best setup to go along with dex weapons.

Immediately, some people will dislike this weapon as it is overused in the PVP aspect of . Whether you are a beginner or a veteran, the fact of the matter is that this weapon is an excellent dex weapon. It has an A rating in dexterity and has one of the most unique move sets of any weapon in the entire Souls series.

You can easily trap people to collect multiple hits on an opponent. Although it can be parried, it is not often seen in PVP. For newer players or somebody who has been playing since Demon Souls for the PS3, it is a superb weapon to try out. It is extremely entertaining to try out, and although it cannot be buffed, its A rating allows it to remain viable.

With the right stat distribution, this weapon can have over 500 AR, which is absurd for any dex build.

Although some people view the katanas as a controversial weapon, I can’t help but acknowledge how powerful it is. Its poke attack is super overpowered because the reach is incredible, and the hit detection is a little broken. The fact of the matter is that katanas are phenomenal dex weapons.

The chaos blade is one of the best weapons in ; being the only katana with an S rating in dexterity. Keep in mind that each attack hurts the user, but it doesn’t make that much of a difference unless you only have one HP left. This weapon is recommended for players looking for a good dexterity katana.

It gives you an advantage over your opponent due to the long-range poke attack. Give this weapon a try – or any katana for that matter, and you will not be disappointed. The chaos blade is absolutely amazing and can leave your enemies frustrated. Needless to say, you should properly farm souls so you can enhance your dexterity stat and potentially one-hit enemies.

At number 3, we have the Black Knight Glaive. The main reason this weapon is included in this list is that it absolutely destroys players in PVP. It may not have the best AR in , but its move set can trap players in it instantly – kind of like the Farron greatsword.

The best part is that this weapon does not use a lot of stamina. With enough patience and the correct combos, you can convincingly come out as the victor in PVP matches. Many players are hesitant about using glaives, but they are definitely worth it. Not only is it an extremely fast weapon, but it also deals outstanding amounts of damage. Enemies will not be expecting your damage output and will be shocked once you hit them a few times.

I know it’s another katana but this one is much better than the chaos blade. Although the previous one had an S rating in dexterity; this weapon, if you do a faith build combined with dexterity is absolutely outrageous. Between this and the number 1 weapon, I had a difficult time choosing which one I truly liked better.

Not only does the washing pole have amazing AR, but it also has one of the best move sets in the entirety of . This is most players go to weapon when they are running dex builds. If you use the sharp gem on it and use the lightning blade, you can increase its AR up to 650.

The washing pole is the best katana in the game hands down since the AR is unheard of when it comes to katanas. Plus, your attacks are shockingly swift as compared to other weapons which give the enemy less time to react.

As stated before, the first and second weapons in this list are a very close call. But I can confidently say that the Exile greatsword has an edge over the washing pole. This is not only the best dexterity weapon, but it is one of the best swords in .

Its AR is incredible – especially in PVP. On top of that, you can put a sharp gem on it and give it a buff with a lightning blade or karthus flame arc. This sword does an insane amount of damage for a dex build. It kills most players in one hit if they are not careful.

Combine it with a mixture of strength and dexterity build, and you got yourself one of the best builds in . The move set is unparalleled as it not only has immense speed but also surprising amounts of damage. For a weapon that swift, the damage is absolutely not fair.

You can get this weapon up to almost 830 AR with the correct build. It will make the PVP fights a walk in the park for you. Plus; as a bonus point, this weapon has a cool-looking design which makes it pleasing to look at and intimidating for your opponents.

Summary of Dex Weapons in

These are the best 5 dex weapons that I found throughout my experiences of . They might not be on everyone’s list but no one can deny that these are some of the best weapons in the game. My favorite is the washing pole due to its long range, however, the exile greatsword is without a doubt the best dex weapon.

With that being said, we are now at the end of our guide about Dex Weapons. If you disagree with this list, leave a comment below telling your favorite dexterity weapon.