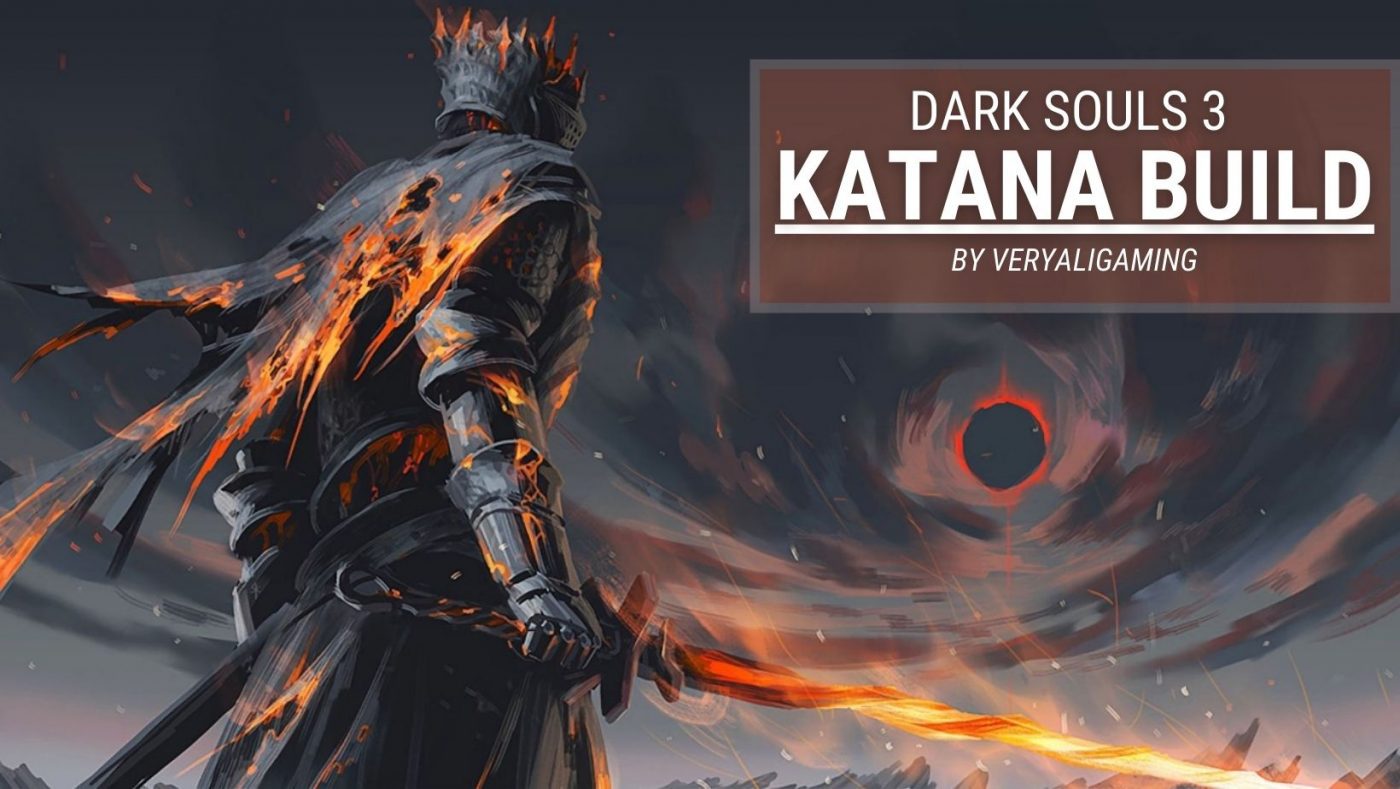 Everyone loves a good katana. Here are some of the best Katana builds you can try in Dark Souls 3.

Katanas are considered as one of the Best Dex Weapons available in Dark Souls 3. Unlike the Quality Build, katanas are meant for swift and precise strikes. There are many options to choose from in Dark Souls 3, but we are going to be taking a look at the top 4 katanas. Then, we will look at what is the best Dark Souls 3 Katana Build for both PvP and PvE.

Most players despise facing players with a katana and this is due to their versatile move-set, surprisingly long range, and the bleed effect. Plus, you can even equip a shield with some of them. Having the best katana equipped with the best shield will give your enemies nightmares.

With that said, let’s move on with our guide of the best Dark Souls 3 Katana Build.

Before we take a look at the best build, let’s find out what the best katanas are. There is a total of 8 to choose from in Dark Souls 3, and we will be taking a look at the top 4. Some of these are two-handed weapons while others are single-handed. You can equip a shield for improved defense with the latter one.

Starting with one of the earliest attainable weapons in Dark Souls 3, the Uchigatana. Appearance-wise, it isn’t anything special. But when it comes down to effectiveness, this katana can slice right through your enemies. However, it is difficult to get for newer players as you have to defeat a strong enemy.

Once you reach the Firelink Shrine, go to the left of the area and you will see a formidable swordmaster. Taking him head-on can be a challenge, but it is extremely easy if you know what you’re doing. Stand on one of the platforms and allow him to charge towards you. As soon as he is about to stab you, roll forward and he will fall over the cliff. He will drop the Uchigatana which you will be able to pick up and use.

The reason it is considered to be one of the best katanas is due to its long reach and versatile move-set. Not only that, it allows you to easily parry oncoming attacks. Plus, the speed of this weapon is extremely fast and can leave players stunned. Once you upgrade it with +10 sharp infusion, it deals 212 physical attack; plus, it has an A rating in Dexterity.
You can even use the Hold stance of the weapon to crouch and hide behind small walls. It allows you to gain the upper hand against the enemy without them knowing where you are. Using the Hold stance also allows you to move past unsuspecting enemies without causing them to attack you.

Moving on towards our next pick, the Frayed Blade is an endgame katana that requires 40 Dexterity stats to equip. Having 40 dexterity will enhance the power of this weapon greatly. The only downside is that the durability is low and you will have to use a lot of Repair Powder.

This katana features a wide variety of attacks that can leave the enemy guessing. Along with slashes, you can use heavy attacks, hold stance, and swift thrusts. On top of having a bleed effect, it also deals dark damage. The best part about dark damage is that it goes through shields; making this katana extremely viable against shield abusers.

At +5 infusion, the Frayed Blade has one of the highest damage outputs of any katana, only lacking behind greatswords. You get 184 attack damage, 76 dark damage, and an A rating in dexterity. Frayed Blade is an exceptional choice for players to try out – especially against shielded foes.

The Black Blade is one of the coolest-looking weapons in the game. It is shorter than the average katana and also weighs more, but it deals tons of damage. To find it, you must kill the mimic located in the Catacombs of Carthus.

As far as move-sets go, this katana acts more like a sword due to its short reach. Instead of thrusts, you can do sweep attacks that are good for dealing with multiple enemies. It also allows you to hit players that roll sideways since the sweep is horizontal. However, you can use a stab attack that will catch most enemies off guard. The ideal combo is to start with the sweep and lead into a stab. This way you have a good reach and swing in an area giving players less space to evade.

The biggest plus point of this weapon is that you can use various items to buff your attack. Carthus Rogue goes hand in hand with the bleed effect since both of them can stack. You can use these items even after you infuse the Black Blade, making it that much superior to other katanas. Black Blade has 225 attack and A-tier dexterity scaling at +10 infusion.

Our number one pick for the best katana in Dark Souls 3, Onikiri and Ubadachi. This weapon favors aggressive players that prefer high damage per second and a diverse move-set. You can wield these katanas individually as well but together they can take out any foe within seconds. To get them, you must defeat the Black Hand at the top of the Grand Archives. This location is also superb for soul and ember farming.

One thing to keep in mind is that one of these blades is shorter than the other. If you are using them together, you will have to go near the enemy for the second attack for it to hit. However, you can still use this weapon from further away but your second attack will not be used at its full potential.

Both of these katanas have attack damage of 192 and they have an A rating in dexterity. Pairing the two weapons will end the fight within seconds without giving your opponent to react properly. The damage output is insane if you get in range and spam attacks. Pairing these katanas with the relevant rings such as the Pontiff Rings will give you phenomenal results.

Not only is the physical damage high, the speed at which you strike is also extremely fast. You can swing both of these katanas while the enemy is swinging his greatsword. There is no way anyone can win a trade against you. If both you and your enemy attack at the same time, you will always deal more damage and be ready to attack again.

However, with that being said, this weapon leaves you defenseless, and it’s more of a glass cannon type of build. If the enemy has good armor, you will almost always lose the fight if they strike you with a good sword. Since you solely rely on your heavy damage output, any enemy that can negate it will always be the victor.

Now that you are aware of the top 4 katanas in Dark Souls 3, let’s take a look at what build you can follow to be effective in PvE. Unlike in PvP, you will have to make a different build as enemies in the game have a fixed move-set. After testing out various builds, here is the most optimal one that proves to be the best. Ideally, dex weapons are great if you are trying out the Luck Build but you can use them in a variety of ways.

After trying out tons of weapons, the Black Blade is quite good in all cases – whether PvP or PvE. Equipping the Onikiri and Ubadachi can look enticing but it is not recommended for newer players. The Black Blade has a good amount of damage, plus it can be buffed even after fully infusing it. Due to that, you can enhance the already insane amount of damage and add more effects to it. If you use Gold Pine Resin, you can add lightning damage to your katana.

Since we will be using the Black Blade, the second hand will be empty. While you can leave it that way, but why waste an opportunity to equip a perfectly good shield. Having the Golden Wing Crest Shield will be extremely beneficial for you. This way, you will be able to parry oncoming attacks and block them if you need to. Plus, this shield is great against physical damage so having it equipped will only benefit you.

As far as armor goes, I went with the Undead Legion Armor since it has good stats and low weight. The low weight is extremely crucial in this build. You want to be as light as possible while having tons of resistance. Being light will allow you to move faster and roll further away. It will also make you attack faster which is always ideal for a katana build. This armor set is good against multiple sources of damage like physical and magic.

You will want to equip Hunter’s Ring – for added dexterity, a Carthus Milkring – for more dexterity, and a Prisoner’s Chain for increased stats. Finally having a Priestess Ring will increase your faith which can work if you are looking for a faith/dex hybrid build. Overall, these rings grant you tons of dexterity and other stats which help you in the long run.
Moving onto the stats, you will want to mostly put points into dexterity and endurance. This will grant you tons of stamina which is useful for a katana build since you will want to attack non-stop. Going for 40 dexterity and 27 endurance will give you the best results. Since the rings are already giving you additional stats, keeping endurance at 27 is good enough.

That about does it for Dark Souls 3 Katana Build. You can try out various katanas with different armor sets and rings to find which is suitable for you. Each player has a different playstyle so you might find other combinations to be better than this. Overall, choosing any one of these katanas and going for the build mentioned above will give you great results. Especially if you are wanting to play PvE, this build is quite effective for it. PvP is different since human enemies will react differently and some might even have counters prepared for your build.

Hopefully, after reading this guide you will try out various katana builds to find one that is ideal for your playstyle. Leave a comment below letting me know which katana is your favorite and what build you prefer.