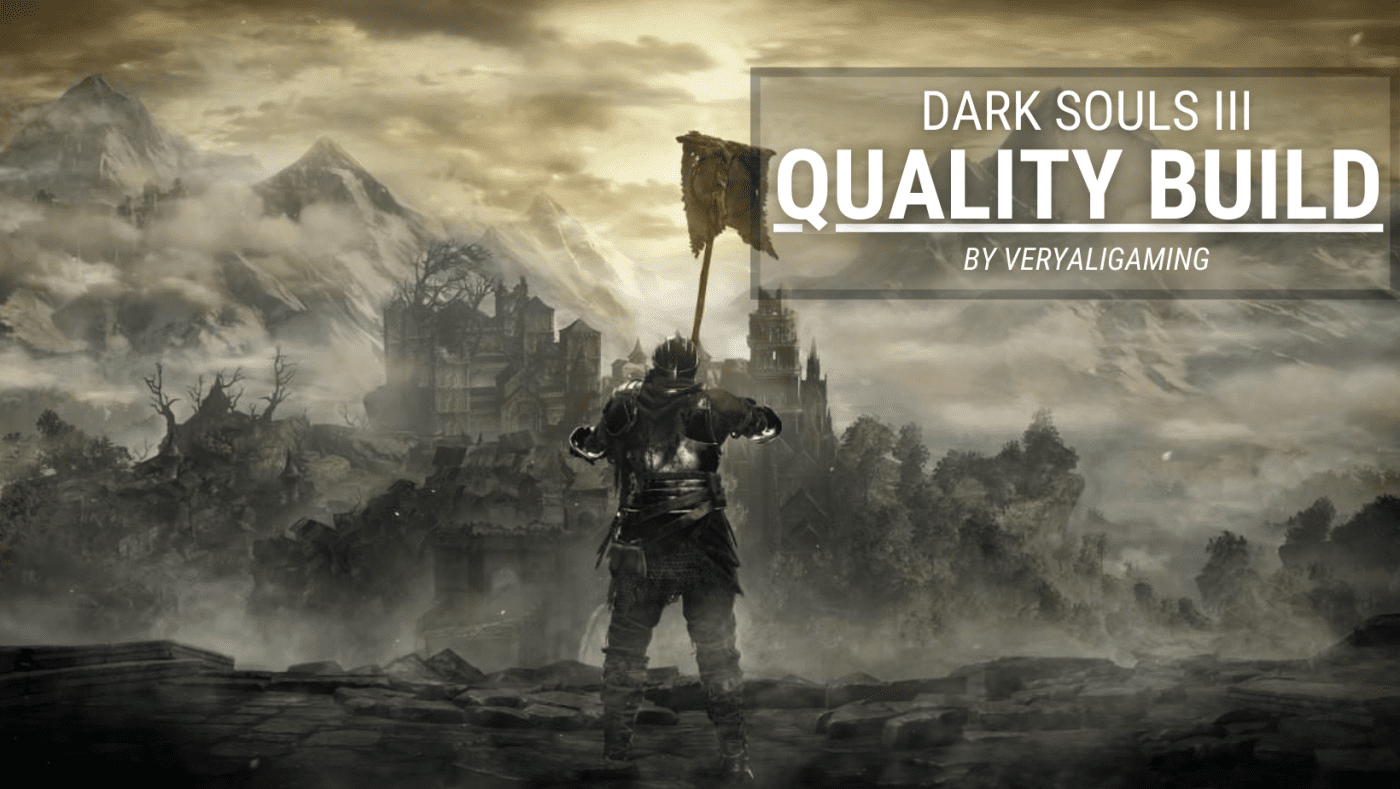 The beauty of Dark Souls 3 is that you can try various builds to see which one suits you best. Players try out luck builds, strength builds, and even magic builds. Today’s guide will focus on the Dark Souls 3 Quality Build where we will be putting points in strength and dexterity.

For this build, you will need to equip the relevant gear, weapons, and rings. There are many different weapons that you wouldn’t be able to use otherwise if you went with a pure strength or pure dexterity build. Most players get confused as to what quality build means. In the context of Dark Souls 3, a quality build is when your character has at least 27 strength and 40 dexterity.

With that being said, let’s dive right into the Dark Souls 3 Quality Build.

This build is ideal for players just starting the game or trying out a combo build. It will allow you to test out various weapons which are otherwise not practical. You will be able to use almost all of the weapons in the game and infuse them to add refine gems.

To start with your character, you want to make sure that you choose the knight class. This is because it will give you a head start since they already have a decent amount of points in the required fields. Also, they have 7 Luck – which is more than enough since we want to keep luck at a bare minimum.

You can also pick the pyro class, but the knight has a good amount of strength and dexterity to start the game.

For the stats, you’ll want to have your Vigor at 31, Attunement at 14, Endurance at 25, and Vitality at 15. You should focus all your points on strength and level it to 35, while your dexterity should be 40. The intelligence and luck do not matter in this build, so leave them as they are at the start of the game.

These are my stats for this build at level 85. You can quickly achieve them but make sure that you are leveling up the right attributes. It doesn’t matter which one you max first since all of them are quite beneficial.

Leveling up attunement will prove handy for you as it gives the player two slots for spells. I recommend leveling up your faith and intelligence by just a few points so you can get the Carthus flame arc.

With that said, you do not have to strictly follow these stats, as these are what I found to be most suited for my playstyle. You can add more points in vigor and vitality if you want more health points. Having high vigor will also allow you to use better gear if that is what you are going for.

You will mainly need three weapons for this build. The refined Uchigatana, Refined Astora Greatsword, and the Pontiff Knight Curved Sword. These weapons will offer you a lot of versatility. Each weapon has a different attack speed and move sets.

I like the Astora Greatsword for PVP fights as it deals a lot of damage and is surprisingly fast. It can kill your opponents in potentially one hit without sacrificing a lot of attack speed. It has an extremely long charge which can be difficult to dodge for most players.

Upgrading your weapons will require tons of ember. If you know how to farm ember, you’ll be able to easily upgrade your weapons and deal tons of damage.

For players who prefer swift attacks, I would recommend going with the Curved sword. It has low weight, which means that you do not have to worry about slow rolls or being overweight. The attack speed is swift, and it offers a little bit more versatility to this build.

This is mainly what I centered this build around. It is a pyromancy spell that requires a pyromancy tool to cast. To use it, you must have 10 intelligence and 10 faith – which is why you must put a few points in these fields. You can buy it from the Cornyx of the Great Swamp for just 10,000 souls. Do note that it can only be purchased after giving him the Carthus Pyromancy Tome. It lasts for 90 seconds – which is more than enough for most fights, and it buffs your weapon to deal fire damage.

Normally the Refined Astora Greatsword +10 will deal 531 damage, but by buffing it with the Carthus Flame Arc, you will deal massive damage of 624. Whether you are doing PVP or facing a boss, the extra damage boost is most welcomed since every little bit of damage helps.

An alternate to the Carthus Flame Arc is the Gold Pine Resin. In most situations, using the Resin can help you more than using the Flame Arc. It is a consumable that applies around 150 lightning damage to your primary weapon. However, it has a duration of only 60 seconds so make good use of it while it is active. You can quickly consume another resin, but in most fights, the timing of applying the resin can be the difference between victory or defeat.

This item is extremely common, and you can find it in almost all of the areas of Dark Souls 3. The reason why it’s better than the Flame Arc is that your damage increases all the way up to 658 instead of 624. The extra damage can greatly impact when you are fighting a boss or a player in PVP.

Looking further in some of the gear that I use with this build; I went with the Grass Crest Shield. The reason why this shield is extremely useful is that it offers additional stamina recovery. Typically your stamina recovers slowly, which is why the Grass Crest Shield is necessary. Also, it offers you the chance to parry your enemies’ attacks and riposte them to deal tons of extra damage.

As far as rings go, the Chloranthy Ring is a welcomed addition since it stacks with the shield and enhances stamina recovery. The Carthus Milkring is also extremely useful as it boosts your dexterity and gives your character an invisibility roll, making it harder to keep track of you. If you want increased strength, then using the Knight’s Ring is also an option. Combined, all of these rings will grant you 5 strengths and 8 dexterity plus the invisible roll. They are very suited for Dark Souls 3 Quality Build since we do not need rings that boost our magic damage or luck.

You can also use various spells in your second spell slot to deal more damage. You can either go with the poison mist – which requires 10 faith. Or you could equip the Flash Sweat, which is a perfect counter for enemies that deal a lot of fire damage. It allows you to absorb most of the fire damage so you won’t lose all your HP at once. Finally, you can also go with the Profuse Sweat, which boosts all of your damage resistances. Most of these spells are for a utility purpose to help you survive in fights.

You can use any armor you prefer since it isn’t an integral part of this build. One thing to keep in mind is always staying below the 70% weight limit so that you are not considered overweight. This will allow your character to roll faster and overall move hastily.

I use the Thrall Hood, Drang Armor, Drang Gauntlets, and Alva Leggings. You do not have to use this set, but it suits me the most, so I went for it. These things have low weight and have good resistance to various effects like bleed, curse, or poison. This allows me to fight against any type of enemy and reduce damage, whereas I usually would be having problems.

The problem with most armor sets is that they will increase your character’s weight over the 70% mark. Looking fancy and having good mobility often do not go hand in hand. I tried multiple armor sets, but most of them looked horrible or made my weight limit go over 70%. While some players might be willing to make that sacrifice, I found it quite challenging to have my movement impaired while my enemies rolled around swiftly.

After reading this guide, you’ll better understand how a Dark Souls 3 Quality Build works. I suggest that you give this a try and use the gear that I mentioned above. It is extremely fun to try out and is viable in both PVP and boss fights. However, some things to note are how you want to arrange your stats and level up your character. Some players prefer more vitality; some prefer more strength; it’s up to you how you allocate these stats to your character.

That about does it for today’s guide about a quality build in Dark Souls 3. Please leave a comment below telling us about your favorite build and which weapons you prefer using while going for the quality build. I would love to know what you all think about quality builds and which gear you find most suitable for yourself.