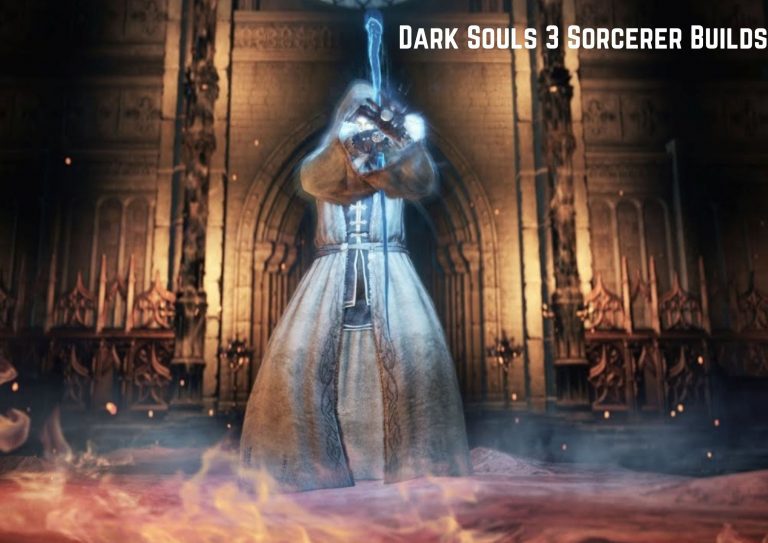 Everything You Need To Know About Sorcerer Builds In Dark Souls 3.
December 6, 2021

When it comes to Dark Souls, some of the more popular ways to approach the game are Melee builds, Pyromancer builds and Sorcerer builds. Sorcery utilizes the Intelligence stat and lets the play cast spells through the use of Staffs (check out of our best staffs guide). While Sorcerer builds in usually consist of distanced combat, using staffs to conjure soul arrows and darts, some melee Sorcerer hybrid builds use Sorcery to buff damage and weapon attacks.

When it comes to Sorcery, much like Pyromancy builds, there is no finite amount of builds. Experimenting and creating builds of your own can lead to a lot of fun and effective builds. This guide covers what we believe to be the most effective Sorcerer builds. We hope you find this guide useful. For more Dark Souls, consider checking out Dark Souls 2 Boss Weapons.

While the Court Sorcerer’s staff is the best overall staff for Sorcerers due to its high INT scaling, Izalith’s staff is the best option for players planning on using Dark Sorceries. While no particular armour set is required when running a sorcerer build in , going with robes will help you with fashion souls We recommend the Black Set, Carlas Set and the Scholar’s set

One of the most popular Sorcerer Builds is the Pure Sorcerer build. Everything about this build is about Sorcery and Intelligence. The pure sorcerer build is a build that relies almost exclusively on Sorceries for damage and combat, with no emphasis on physical combat. When running a pure sorcerer build, we recommend an Intelligence level of 60, alongside high attunement. The remaining levels can go to vigour or endurance.

For your Sorceries, we recommend the Soul Dart or Arrow, Homing Soulmass, Farron Flashsword, Great Soul Dart and Pestilent mist. Your basic Soul Arrow/Dart will be doing most of the work against smaller enemy types and ads. Since it will be dealing a decent amount of damage at high Int levels, it will easily get you through smaller enemy types and will also be effective at eating up the health of larger encounters. It will also help in creating distance and causing minor damage during PvP encounters.

Homing Soulmass can complement your Darts/Arrows during encounters. It will also help as a defensive mechanism, especially during PvP. Having homing soulmass surround you will mean that your foe will be continually worried and will think twice before making moves.

Farron Flashsword and Great Dart will be your heavy hitters. Farron Flashsword will also help in situations where your opponents close into you. Pestilent mist is a good way to chip away the health of slower-moving large enemies and bosses resistant to magic.

We recommend using Saint’s ring, Magic clutch ring, Sage ring and Bellowing Dragon crest ring. Saint’s ring gives you an extra attunement slot which can be crucial for a build like this. Magic Clutch ring lowers your defence in exchange for higher spell damage. The trade-off is worth it for this is a ranged build and you should be trying to avoid contact/damage anyway.

A build like this will excel in both PVE and PVP. Once you get used to the casting and distance, you will be almost overpowered. You will be melting through your foes in seconds, with even the soul darts one hit killing most ads. The quick time to kill, very high damage, distance management and relative ease of use makes the Pure Sorcerer build one of the most fun and effective builds for almost every type of encounter in . Do expect rage texts from the invaders you send back home though. All in all, a pure sorcerer build in is a very powerful and fun way to play through the game.

For your rings, we recommend the Prisoners chain and ring of favour to manage your HP and endurance for this build won’t leave much room for those two to be upgraded. Other than that, we recommend the Saint’s ring and the Bellowing Dragoncrest ring.

For your Sorceries, we recommend Affinity, Great deep Soul and Dark Edge. For a Pure Dark Sorcerer build, we also recommend going with a basic weapon and infusing it with the Dark Gem (check out our Infusions guide) which adds Dark damage and Int/Fth scaling to a weapon for there are not enough Dark spells to get you through the game along.

A Dark Sorcerer build with a Dark weapon and Dark Spells with high Int/Fth can be devastating. We also recommend Dark Coloured robes and remaining hollow for aesthetic purposes.

Dark Sorcerer builds in should serve exclusively as a PvE build. This build will feel underwhelming in PvP but will be a lot of fun in PvE. The powerful Dark spells, along with your Dark weapon will tear through every enemy encounter.

Affinity, Great Deep Soul and Dark Edge will get through almost every ad and non boss encounter. During hard/boss encounters, you melee weapon will go hand in hand with your spells. They will work in conjunction to yield a lot of damage and a very fun playthrough.

Another popular way of playing as a Sorcerer is the melee Sorcerer hybrid build. Such a build utilizes your high Strength and couples that with a melee weapon. For a melee sorcer build in , we recommend an Intelligence level of 40-50 and a Strength or Dexterity level of at least 40. The remainder should go into Vigour, Endurance and Attunement.

A melee sorcerer build will be both a long-range and short-range combat type. You will be using your damaging sorceries to cause damage from a distance and plan your next move while simultaneously going in and attacking with your melee weapon.

For your rings, we recommend going with the rings we recommended for the Pure Sorcerer build but swapping the Sage ring for the ring of favour. For your Sorceries, we recommend Great Magic Weapon, Homing Soulmass and any Soul Dart or Arrow.

You will be using the Soul Dart as a means to cause damage from a distance and to take on smaller ads. Great Magic Sword will give your melee weapon a major magic buff, increasing the damage. This will come in handy against bosses, mini-bosses and encounters with multiple ads. The homing soul mass will help in times of panic, complement your soul dart, and keep PvP opponents second-guessing and maintaining distance.

Melee sorcerer builds in will be good for both PvP and PvE. They are, however, more geared towards PvP. Such a build will excel during PvP encounters. You will be ready for all sorts of encounters, from invading a gank squad to a 1V1 with a Mage or a pure Strength build.

Since a melee sorcerer build puts heavy emphasis on both casting and melee combat, it will be decent for PvE runs too. The Great Magic Weapon buff will make such a build especially effective when facing tougher enemy types. All in all, this build is a great all rounder for all kinds of players and one of the best sorcerer builds in .

Here are the locations for every item mentioned in this guide:

Can be purchased from Yoel of Londor for 1,000 souls.

Can be purchased from Orbeck of Venheim for 3,000 souls.

Can be purchased from Orbeck of Venheim for 1,000 souls.

Can be purchased from Orbeck of Venheim for 2,000 souls after you give him the Sage’s Scroll.

Can be purchased from Orbeck of Venheim after giving him Logan’s scroll.

Can be purchased from Karla, the Dark Sorcerer for 15,000 souls.

Can be purchased from Karla for 8,000 souls.

Can be picked up from a corpse near the shortcut gate to the Road Of Sacrifices.

In the smouldering lake, you will come across a hostile large rat. Behind that rat is a hidden wall with a chest. Behind the chest is another hidden wall. Hitting the second wall and then jumping down to a ledge will lead you to the Izalith Staff.

To the left of the Road of Sacrifices swamp, you will come across a hollow room with an enemy. There you can pick up the Sage’s ring.

Can be purchased from Irina of Carim for 3,000 souls.

From the Pontiff Sulywahn bonfire, tread ahead and pass the area with the giants and the dead giants. Upon entering the first building, go to the left corner and hit the wall. It will be a hidden wall and will reveal a ladder. Going down that ladder will bring you to an area with very difficult Sulyahn beasts. Beating those will give you the Ring of Favour.

To obtain this ring, you will have to beat Champion Gundyr. After beating him, transpose his soul to get the Prisoner’s chain.

In Irythyll of the Borreal valley, head o where the Pontiff Knights and Fire witches stand together and act in conjunction as if standing on a stage. Kill them and head to the right of the platform, strike the wall for it is a hidden wall. Here you will find the Magic Crest ring laying atop a corpse.

In Irithyll Dungeon, head to the room in the corner of the main area that is opened using the Jailer’s key. You will find the Bellowing Dragoncrest ring here.

Now that we are done with the Sorcerer Builds, let’s answer some common questions.

What is the best Sorcerer build in ?

What is the best Sorcerer build for beginners?

In our opinion, the best Sorcerer build for beginners is the Pure Sorcerer build. Yes, it has a slight learning curve, especially for those transitioning from melee builds. Diving straight into a pure Sorcerer build, however, will mean that you will quickly get acquainted with spells and intelligence scaling. You can then branch out and experiment with other builds.

What is the best Sorcerer build for PvP?

This entirely depends on what type of encounters you want. Both the melee Sorcerer hybrid and the Pure Sorcerer build are exceptional PvP options. If you want more close-quarters combat, the Melee Sorcerer combo can be very devastating, making you go in and out of combat in an instant. It will also keep your opponent vary of your next move. The Pure sorcerer build can be equally effective. The ability to deal tons of damage very quickly from a distance can be a big advantage. Most players will be overwhelmed by your Sorceries, and some might just give up without trying.