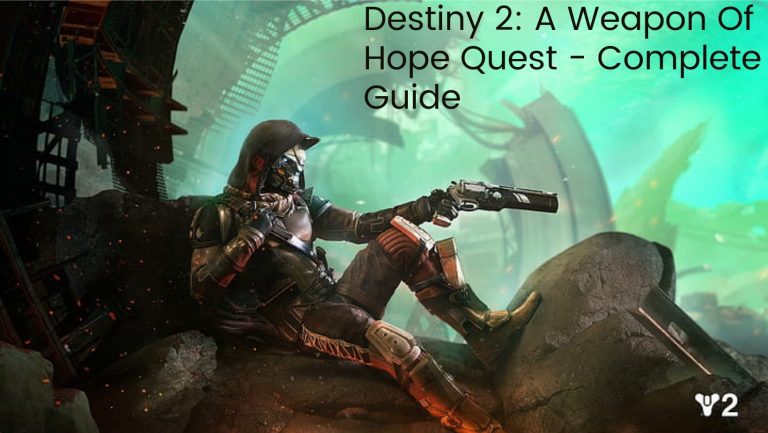 Have you been grinding quests to get your hands on every new weapon that the devs have put out since the game’s advent? Then you must be aware of the new exotic hand cannon, Lumina, that has recently made waves through the community. First, you have to complete the “A Weapon of Hope” quest to try out this new weapon. This quest challenges players in a long, grinding, and draggy way, with several minute details. But you need not worry, as we have got you covered with a step-by-step guide through this quest with many small, helpful tricks to ease your way through it.

A Weapon is a quest that is meant to be played and completed with friends. Just like the quest for Randy’s Throwing Knife, we have compiled a bunch of tips and incorporated them with the steps for this quest in order as:

Where to Start A Weapon of Hope

When starting, the question that comes to mind is, at what place do you start the quest? The answer is right here. The first thing you have to do is go to the same place where you began the “Thorn” exotic quest, in the salt mines in the European Dead Zone (or EDZ). From here, you take a teleporter, which takes you to a completely different place. Here you are on a hillside with a path carved in an upward slope. You have to climb up this path, go through a barrier wall and keep climbing upwards and onwards. Past the place where you found Thorn before, you will come upon a chest. When you open the chest, you will get two different items:

In this way, you will jump straight into the quest.

“Identify the location of the original Thorn using your system positioning device.”

So, according to the quest, the system positioning device gives you a location that you need to follow. It is essential to mention that this location keeps on constantly changing, probably every hour or so. When I went through it, I got shaft 13 in the EDZ (shaft 13 is a lost sector in the Sludge). However, you will surely get a different location. If you have trouble finding that location, you can count on the internet here as several players have posted pictures of specific areas on different platforms. Following these steps, you have to find the exact location as marked by the system positioning device.

After you have located and traveled to the location, you will find another chest there. Opening this chest will give you another quest step named “Bearers of Evils Past.”

Bearers of Evils Past

“Neutralize the Thorn’s darkness with your intrinsic light.”

You need to generate 250 orbs of light for this step, and I say this with a lot of stress, with your allies! Although not mentioned in the quest step itself, you should be playing this with as many friends as possible.

All you need to do is go somewhere, such as the Blind Well, where it is easy to generate orbs. Every time you get a harmony buff, particularly in the Blind Well, you can shoot supers and generate a ton of orbs. Some of these supers are better at generating orbs than the other ones. For example, on Titan, Thunder Crash generates around 5 to 7 orbs, but that is quite hard to do with Hammers.

Along with supers, Masterwork weapons such as the Braytech Werewolf seem to help generate orbs of light, as reported by many players. Note that if your allies generate orbs, they count towards your progress in this quest step. Following these guidelines, you can generate the required 250 orbs of light and complete this step in just one play-through of the Blind well. This step should not take you much time to complete this way.

Once you are done with this step, you are going to get a bunch of rewards, three different quest steps, and a brand-new weapon too! The weapon that you receive here is the legendary hand cannon named “Rose.” This weapon comes with no inherent perks. As you complete the three quest steps one by one, perks are added to your new weapon.

The three quest steps are as follows:

This is one of the simplest quest steps and is mostly self-explained. It does not take much to reach a score of 50,000 in a Nightfall strike. If you put on blackout and heavyweight modifiers and have the light like 10 light levels below what you are, you will complete it in no time. With these modifiers, we not only easily surpassed the required score but also reached close to 100,000!

This quest step asks you to complete encounters in Blind Well, the Forge, or in Escalation Protocol.

In the case of Escalation Protocol, you can get only 1 point for waves 1 to 6, but for wave 7, you get 4 points for completion. A recent update made a significant change to Escalation Protocol, which is very useful for players. After doing wave 7, you get reset back to wave 6. In this way, you can repeatedly keep on doing waves 6 and 7 and keep extracting points out of it. This is another great way to boost your progress.

For the Forge, you can get a total of 4 points out of this activity. One point each for waves 1 and 2 and then two points for the boss wave.  This can be done in a short amount of time and is considered to be relatively easier too!

Among these three activities, Blind Well is the one that you can get the most worth out of while grinding this quest. This is especially true when you have a good team around, and you can unlock and complete the Heroic at the end. However, the Forge is a little easier to complete even with a half-decent team, and it only takes about half the time. You can complete the Forge twice in about the same time that you complete one Blind Well with the heroic. So, it is up to your personal preference here.

On the other hand, Escalation Protocol is much slower and a real drag from waves 1 to 6. You would rather not waste your time on it, since it became quite a snooze fest for me playing it.

For this objective, you have to defeat multiple enemies without reloading your weapon. I think we all have that inner urge, everyone in a while, to select a machine gun and start mowing down enemies with it. With a large machine gun, you have plenty of rounds to spend before you need to reload your weapon. Easy as cheesy, right?

Done with this quest step, you will now unlock multiple new perks for the Rose hand cannon. You will also get a new quest step termed as “Fireteam Leader.”

“Complete activities throughout the solar system with rose equipped. Fighting in a fireteam with other Rose wielders grants most efficient progress.”

With a team of 3 allies, probably the best activity for you is the Strikes. Just jump into Lake of Shadows, and with a good team, you can complete a single run in under 4-5 minutes, which will give you about 12% completion of the quest step. A little bit of grind, and this can be done in not too much time.

With more players, let’s say a 6-player team, you can get more progress in a similar time. Playing Menagerie, if your team knows what to do and does it well, you can beat it in a very short amount of time. With one run granting you 35% progress, you will be able to beat this quest step in little to no time.

Crucible is also an option for those who would rather play that. We played a bit of Crucible but found both Strikes and Menagerie to be better options than it. We tried some story missions as well, but they gave us 0 progress in our quest step. So, it is recommended that you stick to these activities only that are mentioned here.

Done with the Fireteam leader, this will be your next quest step that goes,

“Defeat Guardians with hand cannons as a team, generate orbs of light for fellow Guardians, and defeat invaders in Gambit before they have killed any of your teammates.”

So, this step involves 3 different tasks. The first task requires you to get kills with a hand cannon and is easily understood. You can do this task in either the Crucible or Gambit, no shackles here. You can use any hand cannon, it doesn’t have to be Rose necessarily. Although Rose is a pretty decent legendary hand cannon, especially with the newly added perks. The good thing here is that both your and your teammates’ kills count towards the progress of this step. So, the more, the merrier. Your own kills will give you about 4% progress, while your teammates’ kills give you 1% progress. Playing with all 6 of your allies will grant you a lot of progression, even in a single match. Over a few games of Crucible, this step can be completed pretty easily.

The second step involves generating orbs of light. Although it is not mentioned, you must have a hand cannon equipped at all times! If you do not have a hand cannon, the orbs that are generated do not count. You can use other weapons, we recommend a Fusion Rifle, but a hand cannon must be equipped.

The same goes for the final step of the quest as well. Without a hand cannon, invasions denied will not be counted as progress. Other than that, the steps are quite simple to understand and execute.

Done with these tasks, the quest step will now be upgraded to a new one called “Bloom.” The Bloom quest step says,

“Enter strike ‘Will of the Thousands’ with Rose equipped to reclaim lost light from hive crystals and defeat Xol. Objectives must be completed in a single run through the activity; progress is not saved across multiple attempts.”

So, all you have to do now in this final step of the quest is load into the normal 200 light strikes. Again, as mentioned, you must be Rose equipped for this step. With Rose, you will get a special buff called “Gardner’s Touch.” You will be able to shoot special crystals, with the Rose of course, that spawn all around the map. Destroying these crystals gives you a harmony buff that charges your super, helping you go through this faster.

Finally, you have to kill Xol at the end of the strike. Nothing much here that demands an explanation. As soon as you are done with Xol, you will get your blood-dirty hands on the Lumina, the weapon you have been working for.

The Weapon Of Hope – Lumina

Lumina is an exotic hand cannon. This weapon carries some pretty decent stats. An impact of 84, an impressive range of 44, a 140 rpm with 13 bullets in the mag. I would say that it packs quite a punch. Statistically, although there are better hand cannons in the game, this weapon still ranks at a nice place on the list. For more in-depth stats, for Lumina and other weapons as well, you can click here.

In terms of perks, Bungie has blessed Lumina with a very good set:

Used with a good choice of perks, I believe you will enjoy this weapon a lot, especially if you are a fan of hand cannons like me. I had a good time using it for a good few days. If you enjoy playing with your friends, then A Weapon of hope quest is worth it for you to complete.