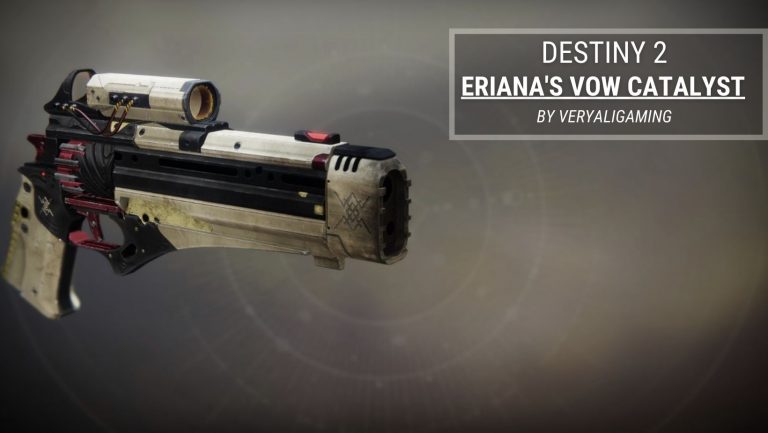 The Eriana's Vow is an amazing hand cannon in Destiny 2. Just how viable is it in 2022? Continue reading to find out more.

Hand cannons in Destiny 2 are in meta and extremely strong. Since they deal a lot of damage at a short-range, players often use them in PvP. Unless Bungee makes larger PvP maps, hand cannons will not be moving away from the meta anytime soon. Some of the best exotics are Thorn, Ace of Spades, and Eriana’s Vow. Today’s guide will be taking an in-depth look at the Destiny 2 Eriana’s Vow Catalyst; covering its usefulness, viability, pros, and cons.

Without further ado, let’s start with this guide about Destiny 2 Eriana’s Vow Catalyst.

This special ammo energy hand cannon has been around since the start of shadow keep and their introduction champions. In this guide, I will be going over and looking at Eriana’s Vow to see if it is worth using in 2022. We’ll be looking at how this weapon performs in both PvE and PvP; the usual pros and cons, and how it competes with other exotic hand cannons.

How to Get Eriana’s Vow Catalyst

As usual, like my previous guide, we can’t review a weapon without knowing how to get it first. The way to get this exotic weapon currently – as of season 13 and 14, is to buy it from the exotic archive. You can find this archive at the tower courtyard, also referred to as the monument to lost lights.

To get the hand cannon, you have to check the Shadowkeep exotics. The cost to buy the Eriana’s Vow is 1 Exotic Cipher, 100,000 Glimmer, 150 Helium Filaments, and 1 Ascendant Shard. Glimmer can be bought from Spider along with Helium Filaments; which can also be found around the Moon.

This exotic also has a catalyst. As of season 13 and beyond, you can get the catalyst by completing the vowel quest given by Banshee 44. The quest itself isn’t that hard to do, and once you complete it, you will have the fully upgraded Eriana’s Vow Catalyst.

Eriana’s Vow is an exotic solar hand cannon that uses special ammo. Its unique exotic trait is called “looks can kill,” where the weapon fires special shield piercing ammo. It also comes with a scope that is strong against Barrier Champions. You can use this to take down barrier shields and those harder activities, so you don’t have to use an anti-barrier mod. This allows you to have an additional slot to use something else – like the Targeting Adjuster.

The perks include extended barrel, accurized rounds, death at first glance, and the polymer grip. The death at first glance allows you to deal additional damage when aiming down sight. This allows you to one-tap players in the Crucible. Thanks to the polymer grip, this weapon is viable at all ranges, pretty much like a sniper but easier to use and faster. Plus, the damage does not fall off despite the range.

The catalyst upgrade grants you an increased magazine size, and holstering this weapon will automatically reload it after a short time. It’s pretty good if you want to take down a champion’s shield; swap weapons to a heavier primary to deal some DPS, then switch back. This perk is extremely useful as this weapon has a fairly slow reload time but the perk can help you bypass it. I strongly recommend that you use it in PvE as it is a 90 round weapon that is superb in endgame activities.

This section of the guide will look at how Destiny 2 Eriana’s Vow Catalyst performs in PvE and when the weapon should be used. Whenever you play activities, and they have a barrier champion, this weapon is ideal. You will easily take down champion shields with this gun, even if you are slightly underpowered for the activity.

Although this weapon isn’t the best at dealing DPS against bosses, it’s still pretty good to use against snipers at a distance. It is fairly good with the amount of ammo it has; especially against mages, mini-bosses, and champions. You shouldn’t ever really run out of ammo, and if you do, you can easily find a fair amount almost everywhere.

If there are no champions in an activity, I wouldn’t bother using this weapon as better alternatives provide more DPS. It is a good starting weapon for any new or returning players in Destiny 2.

For PvP though, that is a different story. If you are a PvP player and you’re good with snipers and hand cannons, then this might work for you. Although for a special weapon, I wouldn’t recommend using it in there as regardless, it’s still two taps to the head.

If you’re accurate, you can easily kill players, especially at a range, as this weapon doesn’t have any falloff with damage. You’re certain to kill a player with two shots to the head or the body. Most of the time, you will have that range advantage against 120 and 140 users. However, for a weapon that uses special ammo, there are better options for PvP.

Using Eriana’s Vow in PvP; you can kill players in one shot to the head if you use an empowering rift. Even if you cannot one-shot players, it’s still a pretty effective weapon because it works similarly to a sniper, except it’s easier to control, handle, and aim.

This weapon does have its ups and downs in PvP. Although it may not be the best to use in PvP, it does have a massive range. The downside is that the reload speed is insanely slow, which can cause the enemy player to take advantage. Ideally, it would be best if you hit the head consistently. In short, it’s an amazing weapon when dealing with enemies at a range. Otherwise, it is difficult to get a kill, or it will be a trade-off.

Eriana’s Vow Compared to Other Exotics

Firstly, considering it uses special ammo, unlike the other exotics, it beats almost all exotic hand cannons in PvE but not PvP. Bear in mind, when I say almost all; other options come close to being just as good.

The main exotic that is comparable to this is the Sunshot. This is because you can use champion mods on it. With the right combinations of mods, you can create an absolutely deadly hand cannon that everyone will be intimidated by.

As mentioned before, if you want to deal with barrier champions, then Eriana’s Vow comes in first place. Sunshot is one of the best and underrated exotics in Destiny 2, but Eriana’s is definitely the go-to for more challenging endgame activities.

In PvP, this weapon stands no chance against something like Thorn, Ace of Spades, or Crimson; especially at close to mid-range. The rate of fire on these weapons outclass Eriana’s Vow by miles. With that said, the Eriana’s certainly comes up to the top three exotic special weapons for endgame PvE.

Starting off with the pros; this weapon is the best exotic special energy gun to use against tough enemies. It is superb against mini-bosses, champions, and smaller enemies that swarm the player in waves. It takes down the barrier shields swiftly as it comes with a built-in anti-barrier mod, unlike using a primary anti-barrier weapon. It’s decent to use in PvP, but it’s not the best, and there are better options out there.

This weapon has a good range and has plenty of ammo despite being labeled as special. You can conveniently collect more ammo during PvE, which makes life a lot easier.

However, Eriana’s Vow does have a lot of disadvantages. The biggest one is the reload speed and what makes it worse is that this is a low DPS weapon. Suppose you are planning to use it, slot on a hand cannon loader or make good use of its perk so you can auto-reload. It’s also not good to use in activities where there are no champions because half of the perks are useless at that point.

After using the weapon for dozens of hours in all kinds of matches offered in Destiny 2, I’d rate Eriana’s Vow a 9 out of 10 in PvE. But as far as PvP goes, this weapon is a 6 out of 10. It’s definitely worth using in master nightfalls if you don’t have any other good options.

For a hand cannon that uses special ammo, it does a fairly good amount of damage in PvE content with a lot of ammo reserves. The only thing that really does make it worth using is its magazine capacity and the anti-barrier perks. You should give this a try as you’ll enjoy it in PvE, and it is ideal for new or returning players due to its easy-to-use nature.

I would love to hear your thoughts on the Eriana’s Vow and if you’d choose to use this over other exotic energy special weapons. With that said, that is all for today’s guide on Destiny 2 Eriana’s Vow Catalyst.