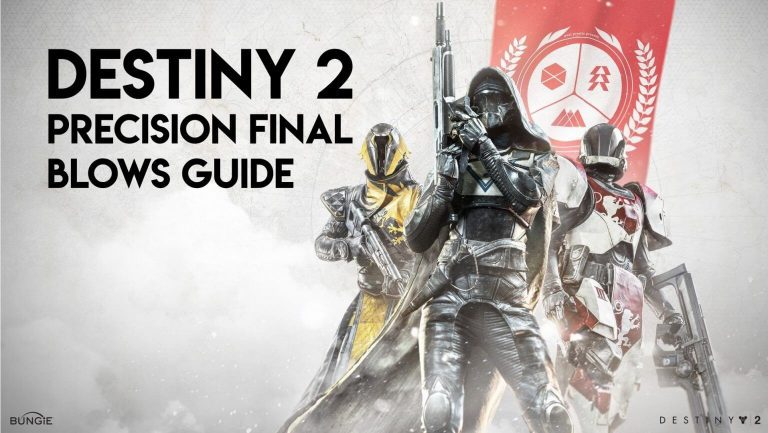 Destiny 2 Precision Final Blows: Everything You Need To Know

Anyone who’s been playing Bungie’s infamous looter-shooter MMO long enough will find themselves well-familiar with the idea of grinding Precision Final Blows in Destiny 2. You see them legitimately everywhere, ranging from bounties of Shaxx, Zavala, the Gunsmith, the Drifter, and other regional vendors to masterwork and catalyst requirements on various exotic weapons like Ager’s Scepter, Crimson, Outbreak Perfected, etc. Hence, if you’re not familiar with how Precision Final Blows work in Destiny 2 and what’s the most effective way of farming them out, you will struggle to complete different bounties and quests that either already exists or are yet to come in future updates.

What are Precision Final Blows In Destiny 2?

The common conception is that Precision blows in Destiny 2 are equivalent to headshots, which isn’t correct. A Precision Hit is a critical hit that displays a yellow-colored damage value on the screen when an enemy is shot at their weak point. While this weak point quantifies as the head of many enemies, its location differs from enemy to enemy.

For instance, if you spray Vex enemies and aim for the head, you will get white-colored damage values instead of yellow – this is because their head is not their weak point by design. The weak point for Vex enemies is their white core, which, while located at different areas of the body (depending on the type of Vex enemy you’re fighting), will always glow white nevertheless; shooting this white core will count as a Precision hit.

A good rule of thumb for current and future enemies is that if you encounter something unfamiliar, take a moment to shoot at different parts of their body; whichever area will produce higher, yellow-colored damage values will be their weak spot. Knowing enemy weak spots is critical as it makes it significantly easier to kill them thanks to the Precision Hit system that Bungie has faithfully implemented in their game.

Precision Final Blows can be farmed in a variety of different ways since at the end of the day, you simply need to get kills with Precision hits, regardless of what enemy you’re killing. However, not everyone has the hardcore grinding mentality of killing enemies anywhere and everywhere. We understand that you would want to make the grind as time-efficient and easy as possible, which is why we have put together three methods for farming Precision Final Blows for all types of players!

One of the most effective ways for new players to farm Precision Final Blows is from public events all over Destiny 2’s planets. However, it is recommended to farm at certain planets rather than others due to the sheer size and accessibility – as a new player; you’d want to target public events that require no special access and take place relatively frequently.

Sticking to Earth is your best bet as it is relatively big, and there’s always some public event going on somewhere (which you can get to relatively quickly, thanks to Destiny 2’s fast travel system). Do note that as these are public events, you should expect to see a lot of other players partaking in them, making it somewhat competitive.

Thus, two other alternatives to Earth for farming public events are Titan and Nessus, so keep those in your back pocket. You should look out for a couple of public events: Fallen Walker, Witch Ritual, Glimmer Extraction, Cabal Excavation, Injection Rig, and Vex Construction.

This farm is very effective at getting Precision Final Blows; the only downside is that you have to do a little work beforehand. This is a relatively common farming spot, and if you’ve guessed it right, you indeed are a knowledgeable guardian! Yes, we are talking about Thrall Room in the Shattered Throne Dungeon. Before we embark on our journey into this area on The Dreaming City, make sure to have at least a shotgun, a sword, and a sniper/bow (long-range weapon) equipped as it will make progress through the area in the safest way possible relatively easy.

Keep in mind that we will only be progressing up till the Thrall Room in this guide. So if you’re interested in also beating the entire area, make sure to check out our Shattered Throne Dungeon guide!

Upon spawning in, head directly towards the entrance; as you approach the door, you will enter the Restricted Zone of Erebus, and many ads will generate in from afar. Before closing the distance, make at least half their numbers as it will make traversing this level of the quest easier. After all the ads have been wiped out, a symbol will appear, and the first part of this quest will commence.

This whole level works because, following the map shown below (made by Ebontis), you need to navigate and head to the area signified by the symbol that spawns in front of you. Clear all the enemies there, and another symbol will materialize, with which you need to repeat the same process. Rinse and repeat until all the symbols have been exhausted, at which point you should navigate back to the main room at the main entrance. The circular floor beneath will open, and you need to simply drop down into it to move onto the next level of the quest.

Keep progressing through the area until you encounter a ledge, under which you see another wave of enemies. As foretold, try to thin out their numbers as much as you can from above them before dropping down to clear out the rest. Once this area has been cleared, another door will open. Please do not rush through this door as it connects to a large open room with vandal snipers positioned far away.

Take them out one by one from behind the door, as far as your guardian eye can see, before progressing to the middle of the room. Then, take cover behind the slight circular elevation in the middle platform and wipe out the remaining enemies.

Progressing through this area will lead you to the final room before the Thrall Room. This section will require a certain degree of platforming towards the left side of the room (for which a sword is handy as it puts you in a third-person perspective). Do note that there will be many Ogres in the distance, and while their projectiles may not deal that much damage, they will inflict knockback (don’t get hit unless you want to fall to your death). Therefore, either you can run past them at full speed or take it slow and them down little by little – whatever works best for you.

Once you reach the end of the area, the quest will signal “Objective complete,” and you will perceive a barrier in front of you. Beyond this barrier is the room we want to be in, the Thrall Room. On a side note, if you found the above progression to the Thrall Room a bit too difficult, you can try out this cheesy skip that the Destiny 2 Community has discovered.

Regardless, in the Thrall Room, you will be “slowed,” meaning that you will not be able to double jump or run; just a heads up! Before entering, you can equip the weapon of your choice (ammo mods are recommended). In the Thrall Room, navigate to the ledge as shown, and there you have it!

An endless amount of Shadow Thralls will spawn and they will run at you in a single straight line, making Precision Final Blows an actual piece of cake – you can even throw some music on and grind out multiple catalysts in a single sitting. Lastly, always remember that even if you die, you will spawn back right outside the Thrall Room – isn’t that amazing?

While the Thrall Room is a fantastic area to farm Precision Final Blows in Destiny 2, the build-up process is a little tedious. Alternatively, there is a third farming method, which, while equally tedious, does not require a lot of combat in the build-up process. We are talking about the Last Wish raid in The Dreaming City.

Before you jump right into this raid, be sure to stock up on some Raid Banners from Hawthorn in the Tower – these are highly recommended as using one fills up your entire fireteam’s (or just you if you’re solo) super energy and heavy ammo reserves. Place them in the spot where you see the “Place Rally Banner” action, which will become self-evident later on – don’t worry about that!

Upon launching the Last Wish raid, make your way through the big door and navigate forward until you reach the Tower of Opened Eyes area. You should see an open door like this, beyond which the first encounter of the raid always starts. Since you’re not interested in doing the raid right now, make your way to the left.

Keep progressing forward and upwards until you reach the Wishing Wall. Here you need to project a particular code shown below – each of these plates will initially be blank, and shooting them will turn them into different symbols. Keep shooting them from the circular platform in the middle of the room until they exactly resemble our desired code.

After doing so, simply step out and back into the platform, which will kill you. Fret not – this is exactly how things are supposed to go, because only then will you respawn into the grinding area!

Now that you’re in the area you want to be in, let’s start grinding. Place down your Raid banner around where you spawned (you should see the action option for doing so) and the make your way to the door ahead. As the door slowly opens, you will be swarmed by Taken Thralls, a lot of them. Then just do what you do best – killing.

Do bear in mind that, similar to the Thrall Room grinding spot, dying here is no big problem. You will spawn right back there, after which you can place down your raid banner and get to work once again.

Summary of the Quest

In a nutshell, if you’re a new player who wants to get some Precision Final Blows in Destiny 2, it’s better to start out small. Go for Public Events on either Earth, Titan or Nessus (sorted from most preferred to least preferred) and grind out as many Precision Final Blows as you possibly can. Once you’ve levelled up quite a decent bit and meet our requirements for the Thrall Room grind, be brave and take the plunge. You will find yourself easily getting Precision Final Blows for Hand canons and Scout Rifles, weapons that are somewhat difficult to grind with.