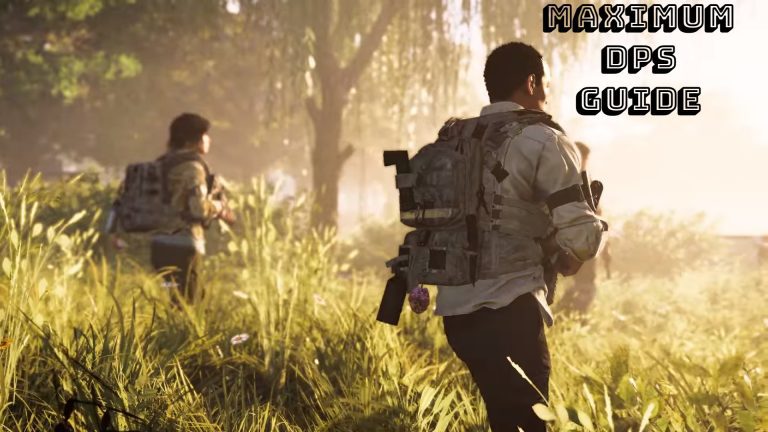 There are alot of possible build combinations in the game but the DPS builds are most used ones. Here are some of the best Division 2 DPS builds you can make in TU 12.1

With the amount of loot variety in Division 2, there are tons of builds players can create and tailor to their playstyle. From pure assault rifle builds to skill builds that put out a lot of damage, there is a lot of diversity in DPS builds alone. Switching up your build can also make the game feel brand new (trust me I’ve been there!) So, let’s discuss the best division 2 DPS builds in title update 12.1 and help you decide which one is better for you. Since each build changes your playstyle.

This is one of the earliest DPS builds of title update 8 and still is valid till the latest update. Calling it a “high-risk, high DPS” build would be an understatement due to the amount of damage you take after using it.

For weapons, the best choice is to combine an LMG and rifle to get the most out of this build. You can use either an M60 or exotic LMG “Bullet King” to dish out consistent damage to enemies. For rifles, the best choice is going for an M1A or the named version called “Bakers Dozen”. For now, since I felt more comfortable using AR, I am using an “Eagle Bearer” with Famas with the In-Sync Talent.

This build has almost max critical hit chance at 54% with high critical hit damage at 184%. Headshot damage and amplified armor as well as damage to targets out of cover, do a tremendous amount of damage. However, they aren’t the real stars of the show.

The main component of this build is the “Glass Cannon” chest piece that gives you 30% bonus damage, but in return, you also take 60% increased damage from NPCs. So how to play this build, considering the fact you’ll be taking additional damage? Well, how division 2 is meant to be played, in cover! If you play smart and stick to covers, you’ll easily clear out rooms full of elite NPC.

The Perfect Vigilance talent on your bag-pack also works in your favor for this build. Since you’ll be staying in cover, avoiding damage at all times, your vigilance will be up for more extended periods of time. This means you’ll have 30% damage from chest piece and 25% damage from bag-pack; you’ll be an unstoppable killing machine. That is until you step out of cover and play guns blazing, then it’s nighty night for you, agent.

As the name suggests, this build is set up around the explosion AOE effect of the exotic pistol “Regulus.” If you, like me, have been using just DPS builds up till now, this build will completely change the way you play.

You can go with rifles for weapons as they’ll take advantage of your specialisation and bonus damage from the kneepads. But primary and secondary weapons don’t matter anyway, as you’ll be shooting your pistol for the most part. This build is purely centred around regulus, and its talent, so let’s discuss it first.

Regulus is one of the two raid exotics introduced in the second raid “Iron Horse.” It’s not just a pistol with an excellent design; however, it packs a punch when it comes to headshots. Its talent is the main star of the show here, called “Regicide.”

Now, onto the stats of this build. As you can see, I have focused more on getting a greater critical change at 54% and relatively lower critical damage at 117%. However, the headshot damage at 185% compensates the damage quite a lot and gives you more damage out of headhunter talent on your chest piece.

This build synergises together perfectly; let me tell you how. The gunslinger will be fully charged up at 100 stacks in 30 seconds. Until it gets charged, you can use your primary weapons from a distance. Once the gunslinger is max charged, switch to your pistol, and taking a headshot of an enemy (preferably a red) will instantly kill them.

When you kill your first enemy, it’s a killing spree from there. The gunslinger damage will be counted towards your headhunter talent and give you 1250% additional bonus damage per shot. That is a lot of damage and even can take out named enemies in one go if you play it right.

A Bulwark shield works perfectly here to protect you from any incoming damage. So, you can gradually push up on enemies and calmly land those critical headshots. You’ll also be getting multi-kills a lot since the AOE blast from the regulus will have bonus damage as well. The best specialization to use with this build is Sharpshooter, and it gives you additional headshot damage and stability perks.

Are you bored from using weapons? Want to switch it up entirely and shift to another playstyle? Well, this build is for you then—all you’ll have to do and find a decent cover and watch everything burn to a crisp.

For weapons, I highly recommend going with the exotic shotgun “Scorpio” due to its multi-status effect inducing talent. As a secondary, you can use any weapon with In-Sync talent as it increases both weapon damage and skill damage by 30%.

In this build, weapons aren’t the main highlight as your firestarter and burn sticky bomb will be doing the heavy lifting. Let’s discuss how exactly you’ll be playing this build.

As the name implies, this build heavily focuses on status effects and how much damage it’ll inflict onto the enemies. The initial explosion damage for sticky is almost 1.1, which is further increased by burn damage strengthened by status effect attributes. The firestarter has burn damage of 260k every tick and burns enemies for over 14 seconds.

After your first throw your firestarter or burn sticky towards enemies, that is when all the gears start to turn. First, the “Toxic Delivery” talent from the Vile mask becomes activated, amplifying your status effect. Then, “Indirect Transmission” talent from the eclipse protocol becomes activated as soon as an enemy die. This talent spreads the status effect to all the nearby enemies.

This cycle continues until either every enemy is wiped out or they are positioned far apart. However, you have to time your skills right. Take this fact into consideration that your burn sticky takes significantly longer to recharge than your firestarter charges. On the other hand, the burn sticky is quick to deploy and does more damage to enemies than the firestarter, which takes a while to trigger.

This may be a laid-back build and an easy-to-use build, but many things can quickly go wrong. “If you play with fire, you shall get brunt!.” This quote fits perfectly here as there is a high risk to throw a skill nearby and end up damaging yourself accidentally. Even one of the charges is dealy enough to take your agent down, so it’s best to make to stay clean of the burn radius. Other than that, this build is simply phenomenal, especially when up against hoards of enemies.

There’s no greater feeling in division 2 than just sitting back and dropping mortar on those enemies who gave you a hard time before. Similar to the previous status effect build, this is another skill build but instead focuses on explosive damage.

We’ll be using the exotic assault rifle “Capacitor” and Famas with “In-Sync” talent for weapons. Here, Capacitor is a great choice due to its talent called “Capacitance” which is great for DPS skill builds.

The primary skill we’ll use is the Artillery Turret, a.k.a Mortar. To acquire this skill, you’ll have to switch to demolitionist specialization first, then invest specialization points into Artillery turret. Our build has mainly stocked up on skill damage and explosive damage, so you can expect booming results. From the above stats page, you can see the base damage for Artillery Turret is almost 4 million. Similarly, the cluster seeker mines are the secondary skill. They also pack a punch, 3.2 million damage punch to be precise.

All you have to do is simply take cover and set up your Artillery Turret in an open area. Unlead your seeker mines and try to stack up as many “Capacitor” stacks as you can before enemies fully agro on you. Now simply start using your turret at enemies and watch them blow up. Similar to status build, the key is to get enemies that are grouped together first instead of focusing on the ones that are far apart.

This build is relatively more straightforward to use than the aforementioned status build. The key to this build’s playstyle is finding a cover spot with a clear view of the enemies. Positioning yourself behind obstructions can prove to be a huge disadvantage for this build. And yes, did I mention that you can also one-shot yourself with this build? The Artillery can ricochet off the walls as well, so try not to trick shot your agent into kingdom come.

All of the builds mentioned above allow you to experience Division 2 in a new way and should be tried at least once. Running similar builds over and over through the same missions can become monotonous at times. Changing up your playstyle and trying new builds is a quick and easy way to freshen up your experience of Division 2. As always, the builds mentioned above are simply templates and can be improved upon according to your liking. Other than that, I hope you’ll have a great time experimenting with these builds and have a blast at the game. Best of luck agents!