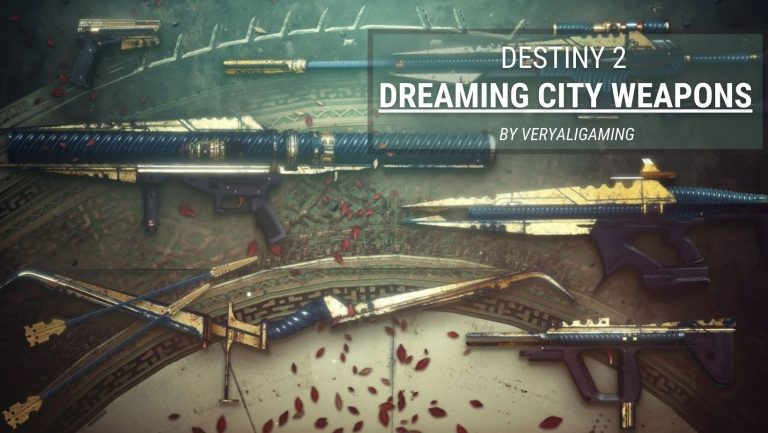 There are 4 main Dreaming City Weapons. This guide will help you decide which one is the best out of all of them.

Today we will be taking a look at the stats, and the perks of all four of the new reissued Dreaming City Weapons added into Destiny 2. This way, we can determine the PVP and PVE aspects of these weapons. The weapons are ranked from worst to best.

These weapons can assist you complete quests faster and conveniently. On top of that, you can use the Targeting Adjuster to further enhance the usability of all of the mentioned guns.

We will be looking at the weapons, their stats, viable perks, and then rate them accordingly. Without any further ado, let’s get started to see the Destiny 2 Dreaming City Weapons.

After using these weapons for hours, I concluded that some are objectively better than others.

Now importantly, this is the worst weapon when compared to these other weapons but overall this is an outstanding rifle. It belongs to the 200 rounds per minute lightweight frame archetype, notably the same as the Mida multi-tool. The overall stats are quite decent and what you expect for this archetype.

To boost the reload speed, we can make use of a couple of perks; in the form of the Rapid Hit and Outlaw. Rapid Hit will give you bonuses to stability if you’re landing that rapid precision hits, so overall, it might be a better choice. You can also try out the Fourth Times the Charm. It allows you to get your ammo back when you land precision hits.

Moving on to the second perk category, you can choose the Explosive Payload since it spreads around -your damage to multiple targets. The one I recommend is Multi-kill. It gives you a damage boost based on the number of rapid kills before you reload.

To get the optimal use of this weapon in PVP, you should go for the Rapid Hit mixed with the Explosive Payload. This setup will make it easier to stun champions and deal tons of damage in rapid succession.

This weapon on its own is superb; it just suffers in the current meta of Destiny 2, which is why it’s ranked lower. This weapon used to perform exceptionally well before, but recently it is not working in the current meta. However, there are some advantages to these brought-over weapons, mainly that insane aim assist. You can shoot a little further from your target and still hit the mark and give you a headshot.

Stats-wise, the range, and stability are horrendous. You have to properly get adjusted to its recoil. Now let’s talk about the perks of this weapon. The ricochet rounds are the highlight of this hand cannon; giving you a boost to range and stability – something this weapon desperately needs. You can even choose the extended magazine perk if you want to fire more rounds, but that is extremely situational.

Much like the previous weapon, you can use Rapid Hit or Killing Wind to enhance this gun further. I suggest combining Rapid Hit with Kill Clip to reload faster and get an insane damage boost. Choosing this layout will make your weapon viable and effective in PVP. Not only that, but this setup also works best for PVE as well. You’ll be able to engage enemies at a pretty decent range while still maintaining the damage and stability.

To no one’s surprise, this is one of the better legendary rockets you want to be going after. Especially since rockets got a 30% damage increase just this season. Hence why they are performing very well. On top of that, the Sleepless has got some unique features.

Stats-wise, it belongs to the high impact frame that’s extremely common, but when we move on to the perks, this is where it truly shines. To further boost your damage, you can get the Impact Casing if you get a great direct hit. Getting Black Powder or High Velocity is also viable, but the damage increase fairs much better than the other two.

You can select the Field Prep in the first category to gain a faster reload speed when you crouch. It also allows you to get more reserves which means that you can fire extra few rounds to deal that much more damage.

For the second category, going for the Chain Reaction is recommended since it causes your enemies to explode when they die. This, in turn, causes nearby enemies to take unsuspecting damage from their teammates. Another perk I like is the Demolitionist since it gives you a free reload when you throw a grenade. That means you can fire back to back without having to go through the reload animation. Due to all of these perks and its stats, this is arguably the best legendary rocket launcher in Destiny 2 right now.

Very interestingly, this belongs to the precision frame 65 rounds per minute archetype. It isn’t technically a slug shotgun due to its high fire rate, hence why it falls under a rare archetype that seems to be forgotten by Bungie. The base range is fantastic, and the damage tops even that. The fire rate of this weapon can be mistaken for a pulse rifle like the Redrix Broadsword. Many players might be asking why this weapon is at number 1 since it doesn’t get used that much these days. There’s a very good reason for this.

If we take a look at these weapons perks, you can get incredible PVP options. You have options that tighten the spread of the shotgun, so it deals more damage to a single target rather than spreading out. You can also equip the Rifle Barrel to gain a huge boost in your range. The accurized rounds also help boost your range as well as the accuracy of your shots.

In the first category of perks, the spotlight falls on the Quick Draw perk. It is undoubtedly the best PVP shotgun perk in Destiny 2. It can make or break your entire shotgun build. The shotguns that cannot benefit from this perk have their values plummet.

Demolitionist is going to be a great fit in the second category. The best out of these is the Snapshot Sight – especially for PVP. It allows you to enhance your accuracy and range. Since you are already dealing tons of damage, thanks you the other perks, getting this makes your weapon unstoppable. This weapon is rising back into prominence due to its consistent performance and damage output. If you were looking for a fantastic PVP shotgun, look no further because this replaces any other weapon you currently have.

The Retold Tale is undoubtedly a top-notch weapon for you to try right now. It has everything you can ask for and more. For players looking to engage enemies at long range, I suggest going for the rocket launcher as it offers great damage and accuracy thanks to its perks.

I hope you found this guide informative; if you did, kindly leave a comment below telling me about your favorite Dreaming City Weapons. We also have more guides on Destiny 2, be sure to check them out as well.