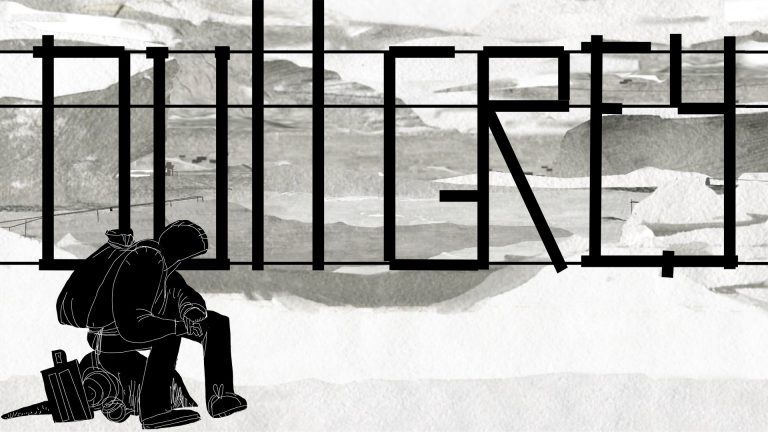 Dull Grey isn’t a game. It’s a visual novel. You know it’s made by an indie dev when there are no animations in the menu or the game.

Reading this game’s title, no one should expect a jolly, action-packed adventure. As the developer hints, Dull Grey’s story has a hidden meaning you’ll figure out if you stick with it. Every few minutes of dialogue, you’ll be asked what career you want. This briefly offers some different dialogue before moving to the next scene. Each time you are shown abstract artwork of the various location you visit, which matches the story’s tone.

So What’s The Story?

I found the actual narrative to be somber yet also intriguing. There are a few grammar mistakes, but they don’t mix up the message. And since English isn’t this indie developer’s 1st language, it’s no big deal.

It starts off in the mother and son’s home. Here they are looking after the grandmother who seems to have severe dementia. Their home is 2 pokey bunkhouses pushed together that were made of scrap parts. All this shows how the family struggles to survive, and why their son must get a career.

The main character Kiryusha is relatable in how he deals with growing up. Especially if you’re a shrinking violet, like me. He doesn’t say much, and when he does try to speak his Mum always answers for him. She also wants him to choose a career that he’ll hate and could even be dangerous. It is mentioned in the beginning her husband is dead. This could have affected her judgment and why she has such a negative view of the world. And of course, how controlling she is of her son’s life. The fact that she can’t even trust him to answer for himself proves that. However, that doesn’t make her a bad person. She does care about Kiryusha and wants the best for him. Although the player realizes it, the mother doesn’t know she is stifling her son. In fact, she’s so involved; we learn more about her than anyone else in the story.

What I like about Dull Grey is that all the characters feel like real people, who are oppressed by the process program. The story isn’t contrived either. There’s no visible villain who needs to be confronted. And there’s no charismatic hero who will return control of the world to the people. It’s about everyone learning how to survive in a bad situation. This opens up more possibilities for storytelling.

Being a lamplighter is hard, manual labor, as you have to deal with transport networks. It’s a noble job but can also be a life-threatening one. Being a tallyman makes you an agent of the state, spying on communications. It’s safe, but people will despise you. Either path sounds like hell, but I’d personally be a tallyman if I had to choose. Ordinary manual labor is already too dangerous to me.

Dull Grey has 11 different endings, and each one can be reached very quickly. However, this means having to sift through the same dialogue 11 times to get some additional dialogue each time. I pressed RB on my Xbox controller to skip so much repeated dialogue I thought it would break. Some of the methods used to find all the endings are strangely cryptic. I didn’t like most of the endings you choose because they don’t let you know what happens afterward. The game stops, and you have to go back to the main menu and start again.

Ambient music plays in the background, accompanied by white text on a black background on one side. And black and white abstract art on the other. This creates an ominous atmosphere that illustrates the tone of the story. It reminds me of Yu-Gi-Oh! Forbidden Memories and how it sets a foreboding mood.

You can 100 % complete Dull Grey in about an hour. Quite shocking as even indie games are usually at least a few hours long. However, it’s being sold now for £3.35, which is roughly $5. What you’re getting is a concise interactive novel. You could get the same experience if you were reading it off the paper and had ambient music playing in the background. I recommend reading this novel if you would enjoy reading a Dystopian futuristic sci-fi story.

Dull Grey (Xbox One) Review - Make Your Choice!
Visuals
40
Audio
60
Story
80
Value
10
Reader Rating0 Votes
0
Pros
Relatable uncontrived narrative about being forced to grow up.
11 different possible endings, with the player needing to figure out how to find them all .
Characters seem like real people and all have depth.
Lore developed of this dystopian, futuristic, sci-fi world opens up more possibilities of storytelling.
Black and white abstract art presentation and music fits the tone of the story.
Cons
Dull Grey can be 100% completed in a hour, but at least it's cheap.
Most of the multiple ending choices feel unfinished.
Sifting through repeated dialog to see each ending is tedious.
More digital book than visual novel, with barely any animations.
48