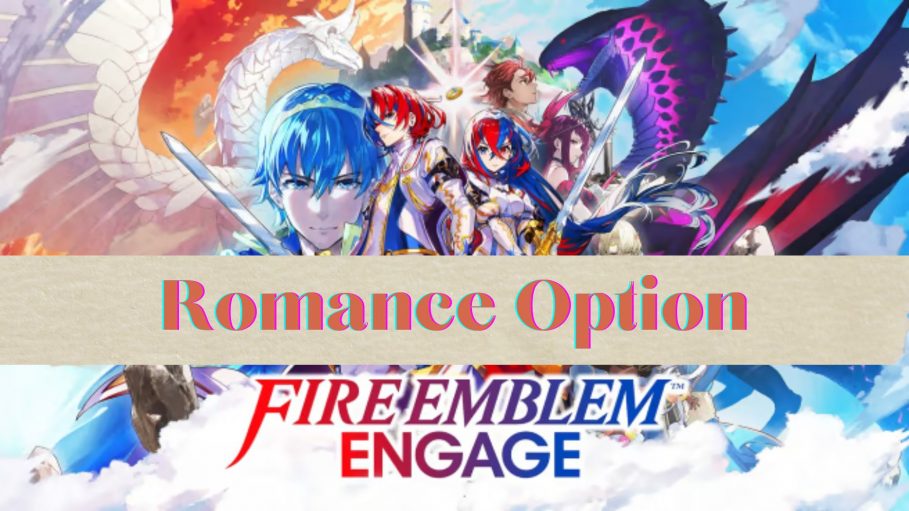 A detailed guide on Romance Option in Fire Emblem Engage.

Starting a relationship with characters in the Fire Emblem franchise is not much use to the actual SRPG aspect of the game, however; it does give more depth to the characters and makes the game much more enjoyable by interacting with them. So, if you are looking forward to the Fire Emblem Engage Romance Option aspect, worry not. Let’s get right into it and learn more about Romance and if it even exists in Fire Emblem Engage, and if so, then how to reach it.

Is There A Romance Option

Yes, players can partake in a romantic relationship with the in-game characters; however, not all those characters are available for Romance (like they were in Fire Emblem Three Houses), and some of them are strictly limited to a Platonic relationship. Mostly because of being either related to the Protagonist Alear, being a minor, or that they were a part of the previous Fire Emblem games.

So yes, you are not bound to have combats and only combats. If you enjoy interacting with characters and want to have a Romance option in Fire Emblem Engage, then congrats. But it does come with its limitations, as you can not involve Alear romantically with just anyone you want. And you also can not get married to any Character either, so that’s a bummer. So, just a friendly tip, do not set up your expectations to date any Emblem character; it is simply not possible.

You can still strengthen your bond with the Platonic characters and get various benefits and buffs from it in the combats, so make sure to keep a good friendship with them regardless and make them a supporting combat companion.

Lastly, there has been a huge step-up in Fire Emblem Engage Romance options as players can finally engage in a Romantic relationship regardless of the other character’s gender. This can surely increase the number of romance options and spark many players’ interests further on.

How To Unlock Romance Option

No, you can not just go around and confess your feelings to any character you want. Just like in real life, you need to make an effort by building up a friendship and completing a quest beforehand. To reach the Romance option with other characters, players need to focus on these two things:

Once you complete the Battle quest in the Paralogue Chapter, you will receive a blue gem ring, known as the Pact Ring, as a reward. The in-game description of the Pact Ring is, “If you’ve reached support level A with an ally, you can give that Ally the Pact Ring to strengthen your bond even further.”

You can access the Pact Ring after obtaining it by travelling to Somniel and going to your room. Check the Momento Drawer, collect the ring and go find your buddy soon to be your love interest. And choose the buddy right, as there is only one character who can reach S-rank support with you.

You can increase your Support Level with allies from C to B and B to A. And if you gift them the Pact Ring, the support level goes to S-Rank from A-Rank, and that is when the Ally becomes more than just a combat companion. There will be a wholesome cutscene with some cheesy support conversation, and that’s all. You can then find a special entry by going to Ally’s notebook once you have gifted them the Pact Ring. You can access the notebook from Menu.

Chances are you are already on A-Rank support with the Ally by the time you get the Pact Ring. However, if you are not, the best way to quickly climb your way all the way up to A-Rank support is by Combating with the Ally side-by-side in battles, buying them gifts from the flea market (you can check each character’s favourites from their notebook), talking and eating with them together in Somniel. These three options are some of the best ways to increase your support level with allies.

Being on A-Rank support is essential in order to gift the Ally the Pact Ring otherwise. You can not strengthen your bond with them for possible Romance.

As we have mentioned previously, not all characters are up to getting flirty with you. You should be aware of which character is available for more than Platonic relationships so you can invest your time in them a bit more from the start.

Whether you are playing a Male Alear or Female Alear, you can get to the Romance aspect of the game with the following male characters (except Pandreo, who is on the straight list.)

There are many female characters available to start a Romantic relationship with you, yes, even if you play as Female Alear.

You can surely strengthen your bond with some characters, but only platonically. Some of the characters are simply not eligible for Romance. Following are some of those characters:

Some characters might show interest in you while conversations and even flirt, but you can not start a Romantic relationship with them. You can even give them the Pact Ring and get on S-Rank Support, but the relationship stays platonic.

Finally out, Fire Emblem Engage is a strategy RPG where players play as Alear and team up with multiple characters, including familiar faces from previous games of the franchise. Craft some combat strategies and fight alongside your allies.

You can do much more than combat, though. The game allows players to form relationships and earn certain buffs by doing so. The Romance option is one of the most exciting aspects of Fire Emblem Engage, even though it does not directly impact the battles. So, if you’d like, find a perfect companion and surprise them with the Pact Ring!