In this guide we will discuss every detail about Gobbo the Tall in Diablo Immortal and help you navigate through everything. 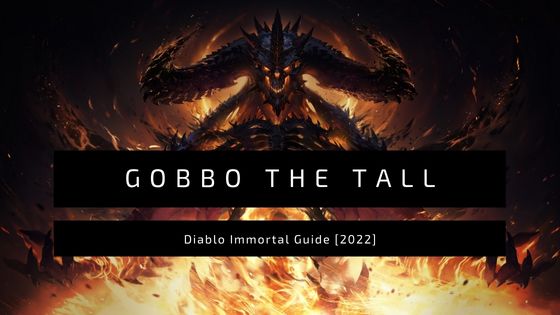 Dungeons and Dragons (DnD) is a renowned game in nerd culture and almost impossible to miss if you talk about role-playing tabletop games.

Let us introduce you to the DnD of RPG video games, Diablo. Initially released in 1997 by the now infamous Blizzard Entertainment was a smash hit among the first generation of gamers who wanted a game that could scratch that dark fantasy itch.

The game essentially boils down to a dungeon crawler where in the end, you, the player, must journey into Hell to slay the evil Diablo. The franchise has lived on since then, with Diablo as an IP maintaining its popularity throughout the years and even getting a mobile game version.

Now, something we know about dungeon crawlers is that many unique locations facilitate that itch for exploration. Nothing exemplifies this more than Gobbo the Tall. This location has many dangerous monsters and extravagant loot for you to raid.

What Are Unique Elite Bosses?

Unique Elite Mobs are mini-bosses guaranteed to drop some nice loot for you and your party of daring adventures. Most of these monsters are found during Wanted Side Quests which appear with the text “New Event” on the player’s screen.

These types of monsters are uncommon to come across in the realm, so when you come across them, make sure not to underestimate their capabilities and respect them when engaging in combat.

Now, what is Gobbo the Tall Diablo Immortal? Well, this is an elite purple monster. By all accounts, this means that you can not summon Gobbo the Tall of your own accord but instead have to wait for it to spawn at a random. There are some theories about how to make the mini-boss spawn, but most of these are simply player whispers and have no concrete evidence.

One theory suggests that you must clear out all the mobs in the area where Gobbo the Tall can spawn and loot all the chests and pre-placed items within the area. However, we believe that this method holds no merit whatsoever, and instead, his spawn timings are almost entirely random.

That is our belief, and you can feel free to be skeptical of this because we understand the frustration of not knowing something about a game mechanic when it’s holding you back from completing an achievement. But do not fret as he will eventually spawn, and you will be able to slay him.

It is located in Bilefen and unlocks the achievement called “Gobbo the Tall.” After defeating this monster, you are assured of getting some rewards. these rewards include Gold, Enchanted Dust, and a Random piece of equipment.

How To Fight Gobbo The Tall in Diablo Immortal

When discussing how to take down Gobbo the Tall Diablo Immortal, we must discuss its attack patterns. It mainly has two attacks that can be detrimental to you. These, alongside a method to defeating the boss, are mentioned below.

An area of effect ability where a skull appears on top of Gobbo the Tall, and he lets out a screech which incapacitates the player by applying the fear effect onto them. This effect takes place in a cone shape and can be dodged as it is telegraphed quite clearly.

Quite the self-explanatory ability as it does precisely what the name states. It causes the enemy to teleport, but this is slightly different than most other teleports simply because there is no visible indicator or telegraph that the enemy will activate this ability.