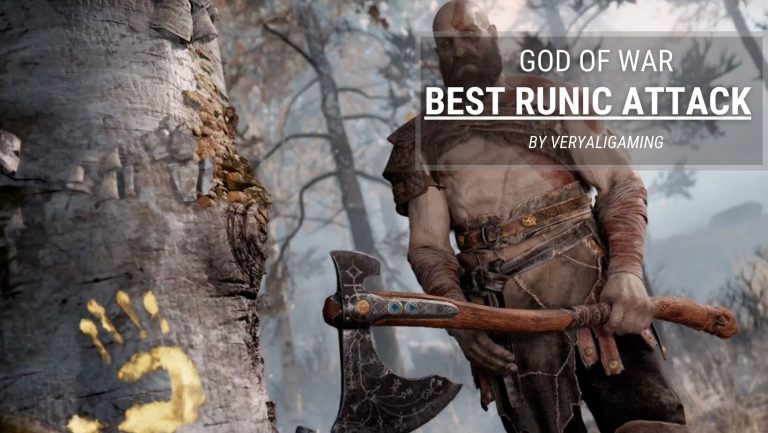 Finding the correct Runic Attacks can give you help you a lot. Check out this guide to find out the best attacks and more.

God of War gives the players many options to choose from when it comes to runic attacks. Much like the best talismans, you have to pick the runic attacks based on your playstyle. Some are stronger in certain scenarios, but in the end, it all depends on the player’s preference. Let’s find out about the God of War Best Runic Attacks.

Since you can use light and heavy attacks, this guide will be divided into sections showcasing the best runic attacks in God of War.

Without wasting any time, let’s find out which runic attacks are most viable.

The leviathan axe is an amazing weapon introduced in the latest God of War. It acts like Thor’s hammer where you can throw it, and it will come back to you once called upon. This was a welcomed surprise for all players as Kratos used the blades of chaos previously.

If you press the L1+R1 buttons, you can use the light runic attacks. After testing out all of the attacks, the Leviathan’s Wake is the most promising light runic attack. You have to aim for this attack, and it will knock back any enemies in front of Kratos while doing significant damage. You can find this in Veithurgard.

Once upgraded, it deals tons of damage and inflicts frost on all enemies hit by it. On top of that, it also stuns the enemies, which means that you can disrupt them from using their attacks. This gives you a solid chance to complete your combo as the enemy will not be able to react.

Overall, it’s a strong light runic attack that has good crowd control and damage. It lacks the disruptive power of Hel’s Touch, but it makes up for it in the area of effect department.

The Breath of Thamur is my favorite heavy runic attack as it deals tons of damage in a large area surrounding the player. Plus, it is extremely difficult to unlock, and chances are that you’ll get it in the end game. However, the Glaive Storm is the winner when it comes to the best runic attacks.

You do not have to worry about aiming with it as it will automatically target nearby enemy units and deal tons of damage. It will instantly kill any weak enemy in the area and take out a large chunk of HP from stronger ones. This attack can change the tide of battle in your favor once you use it.

To unlock this attack, you must open the legendary chest in “Buri’s Storeroom.” The chest itself is not hard to find, so it won’t be a problem at all. I used this heavy runic attack when facing the Valkyrie queen, Sigrun. It comes in handy, especially when you are surrounded by tons of enemies; smaller ones or large giants.

Combined with the Leviathan’s Wake light runic attack, you will deal massive amounts of damage that destroy surrounding enemies in an instant.

No one expected the blades of chaos to make a return to the latest God of War. They were introduced midway into the game and shocked every player. It hit everyone with a feeling of nostalgia mixed with pure excitement. As with all weapons, the blades also have light and heavy runic attacks.

The Rampage of the furies is likely the best light runic attack when it comes to the blades of chaos. It was difficult to choose this one as the Nemean Crush is also a strong contender, but I was leaning more towards the Rampage. As a bonus, this attack looks amazing and makes you feel invincible. Kratos slowly moves forward as he swings his blades, dealing massive damage in front of him.

It is great for hitting multiple enemies in front of you and ends in a powerful slam that knocks up everything in the area. Rampage of the furies excels in dealing a lot of damage and inflicting the burn effect that takes away HP over time. Once fully upgraded, the radius of the impact is enhanced greatly and becomes an extremely strong attack.

Plus, it stuns enemies forcing them to take all the damage from this attack rather than being able to dodge. You can also disrupt the enemy combos if you time the attack properly.

For the heavy runic attack, the Hyperion Grapple is the way to go. For veteran players, this move will ring a bell. Once you use it, Kratos tossed the blades of chaos towards and enemy; launching himself at the enemy as well. It not only deals a lot of damage, but it stuns the enemy as well.

This attack is ideal for inflicting large amounts of stun damage, leaving the enemy vulnerable to your other attacks.

Since you have the area damage with the light runic attack, equipping this will ensure that you are a beast in one on one fights. You will be able to get this attack in a legendary chest when you are exploring Tyr’s Temple.

Much like the runic attacks of Kratos, you can also find attacks for Atreus to use and provide additional utility. They are extremely useful and strong attacks that assist Kratos greatly. Most of his attacks have the same gist to them, but the Storm of Elks is a superb attack that can change the flow of battle.

It summons multiple giant elks that stampede through the battlefield allowing the player to catch their breath. The elks deal tons of damage and disrupt enemy attacks as well. You can get this attack pretty early on, which means that you can start upgrading it soon. It is useful if you are dealing with a large number of enemies. If you combine it with your runic attacks, you become practically unstoppable.

God of War gives many choices to the player to pick from. At the end of the day, it all depends on your playstyle. The mentioned attacks are all extremely useful and complement each other on the battlefield. If you use these attacks together, you will be able to deal with any opponent standing in your way.

That about does it for today’s guide about God of War Best Runic Attacks. I also mentioned the best runic attack for Atreus since he is as important on the journey as Kratos. Leave a comment below, letting me know which attack you found to be most useful during your playthrough.