This God of War Ragnarok Guide covers the top best weapons in the game. Apart from this, some of their best skills are also listed. 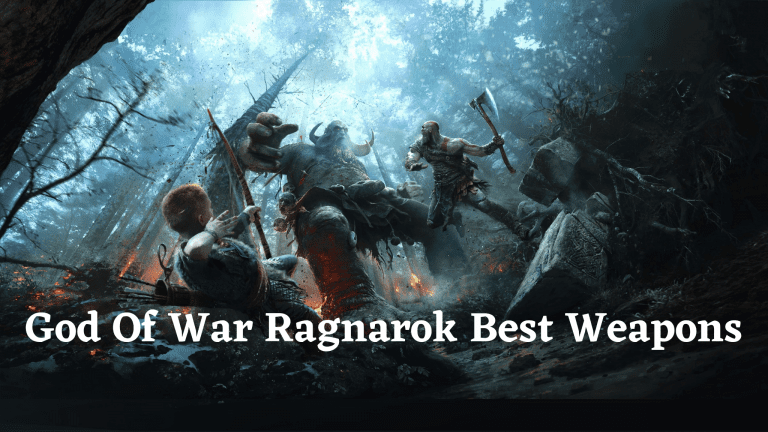 GOW Ragnarok allows you to play with different characters instead of sticking with Kratos for all the heavy lifting. Each character has its own Best Weapons that you can pick from to output the most damage.

Among all the Kratos’s weapons, the two mentioned below are the most dominating ones.

This is the Krato’s primary and offensive weapon and is regarded as one of the best weapons. The Huldra Brothers forged the Leviathan Axe and then gave it to Kratos. It is extremely powerful and is a source of greater damage. It is ruled by the element of ice which allows you to freeze your opponents.

The fascinating fact about it is that you can hit a vast range of attacks and precise ones through this axe. You can damage the enemies, even if they are far from you, by throwing your war equipment and instantly summoning it.

It is most appropriate for counterattacks and can become amazingly deadly if you go for the runics. Apart from freezing and throwing, you can also stun the enemy. If many enemies surround you, the Leviathan Axe can immediately clear them.

Kratos uses the blades to dispatch the enemy or bring him closer for a harder attack. The blades can also be charged to stun the monsters and then apply combos of light and heavier attacks. These mighty blades can be used from the beginning of God of War Ragnarok.

These blades are the warmth that the cold and brutal enemies of the Norse realm fear. Let’s talk about some of the skills that can be performed using them.

In God of War Ragnarok, Kratos is not the only one who got a magnificent weapon. The Atreus owns one too. Talon Bow is the default weapon used by the Atreus, and playing with him becomes more reliable when you upgrade the bow.

The Yew Tree bark has been utilized in making this bow by the Faye. You can use Ydalir timber to upgrade this weapon. A total of 11 of these will be required for the maximum upgradation. It enhances the bow shot and melee attack for every shot you make.

There are no requirements to unlock it, as you will get the bow at the beginning of the game. The Runic summons can be used in it, and distracting the enemies on the battlefield is the main purpose of the Talon Bow.

Freya, a disciple of the race of gods from Vanir, helps Kratos and Atreus on their journey in the Norse Realms. The weapons that come to mind while thinking about Freya are all swords and bows; we consider Thrungva the best one

Freya always wields her sword on her side. The sword Thrungva has its origins in Vanir, Freya’s birthplace. Freya combines the sword’s power and her magic to absolutely annihilate the enemies coming in her direction.

The number of beasts and monsters doesn’t matter when this sword rises. Freya and her sword come in handy when Kratos is busy fighting off the bigger beast. Let’s talk about some of the skills that can be performed using them.

Kratos, Atreus, and Freya would be much less feared if they did not have an ensemble of butchering weapons in their hands. Well, that is all we had to say about the iconic weapons of God of War Ragnarok.

If you liked this guide, share and keep following us. See you in the next one!