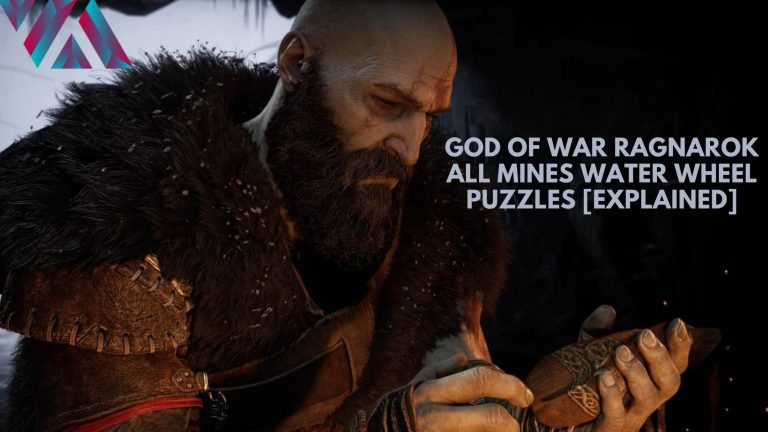 During the Quest for Tyr mission of God of War Ragnarok. When Kratos and Atreus walk towards the apple core mine, there will be a need to solve God of War Ragnarok All Mines water wheel puzzles to open their pathway to finding Tyr. Most gamers find it pretty complex and ambiguous to solve these puzzles and it becomes frustrating sometimes times.

In the first puzzle, you will see water flowing through the trough throw the Leviathan axe towards the fourth section of the trough if you will count from left. It will freeze the water. As a result, it will lower the crane to sing over the gap.

After crossing the gap, To collect the Horn of Blood Mead you will have to light up blue flames. Therefore, look at the front of the box you will see three symbols. Find the blocks with these three symbols and throw the Atreus’ blue rune arrow to clear it.

You will the one box with a symbol at the right of the box with the horn of blood mead. Throw a blue rune and clear it. Then move to your left. Jump down the ridge. After jumping down open the box to your right and collect Rawhide (Crafting Component) which will result in HackSilver points increased by 158+.

Now, Look at your behind you will another block with the same symbol that was on the box. Throw the Leviathan axe and freeze water to stop the flow. Throw the Arteus’ blue rune arrow to clear which will result in lighting up the blue flame.

Till Now, you will be only left with one more box to clear it. Go to the right side by jumping the gap and clear the last blue crystal block. Now, walk towards the box and collect the Horn of Blood Mead. This will solve the first puzzle.

The second Mine water wheel puzzle is about crossing the door and the main task is to reach up to that door. You will have to play with the mechanics of water wheels to use the large block as a lift to the door.

Therefore, help the Atreus to climb the hill and follow his moments. To your left, you will see a gear mechanism that is powering the movement of a sort of bridge. Throw the Leviathan Axe and freeze it, at the same time when the bridge is flat.

Jump and move forward. Now, you will see a large block covering your path. The same block will act as a lift to the door. Throw the leviathan axe at the trough and freeze the water. You will see a red square hanging beside the trough. Hit it and it will change the direction of the trough.

By doing that water will start rotating the other wheel and it will lift the block. Thereafter, passing the block again hit the trough with an axe and the block will move down a little bit. Jump to the block.

When water will start the wheel again it will raise the block and now you can reach the door. Atreus will be already there on the other side of the door and he will help you to open the door you can easily solve the puzzle in this way.

After solving the above two puzzles you will end up in a room with a lot of water wheel mechanisms in it. Atreus will help you to clear some rocks in the pathway of the trough to avoid disrupting the flow of water in it.

All you have to do is to throw the leviathan axe at the trough in which the water is flowing. Throw the axe at the middle so that water can directly fall into the second trough. Which is right under the main trough.

Once water will start flowing through the second trough. It will activate the water wheel and raise the chain. Now, you can pass the gap and walk through the door, and this way you can solve your third puzzle

In puzzle four, you will face two enemies in the mines. Kill them and follow the path which will have like the old school railway track. After that, you will enter a room with water wheels and a trough with water flowing in it.

There will be a door across the gap. Tyr might have escaped through that door. Look to your right and jump the ridge. You will see a metal chain. Climb the elevated area with that chain and you will be facing the same red square which you previously hit to change the water flow.

Hit it again. It will change the water flow and one wheel will start working. Now, go back to the point where you were before. Hit the main trough with the leviathan axe from the point right above the water wheel to your left.

The second wheel will start working and will lift the chain. You can cross the gap and again throw the axe towards the trough right above your head on the right. A lift will be down enter into it by opening the door and the puzzle will be solved.

After moving up on the lift which you mounted in puzzle four. You will have to throw the leviathan axe toward the trough on your left. It will move the block right in front of you at some distance. Later on, you can use this block as a conveyer belt to the door.

All you have to do is to help the Atreus to climb up the ridge so he can remove hurdles such as rocks in the pathway of water on troughs. See behind and help Atreus. Once it’s done, throw the axe on the trough to your right and it will lift the chain.

Moreover, you can use that chain to mount the block which you previously pulled in front of you. Then, the Atreus will remove the rocks and the block will take you toward the door. Open the door and all the puzzles will be solved.

The magical Leviathan Axe is the main weapon in case of solving these puzzles in the apple core mines in the quest of Tyr. God of War Ragnarok All Mines water wheel puzzles is not as confusing as they are usually considered. Solving them will help the Kratos to reunite with Tyr.

God of War Ragnarok The Hateful