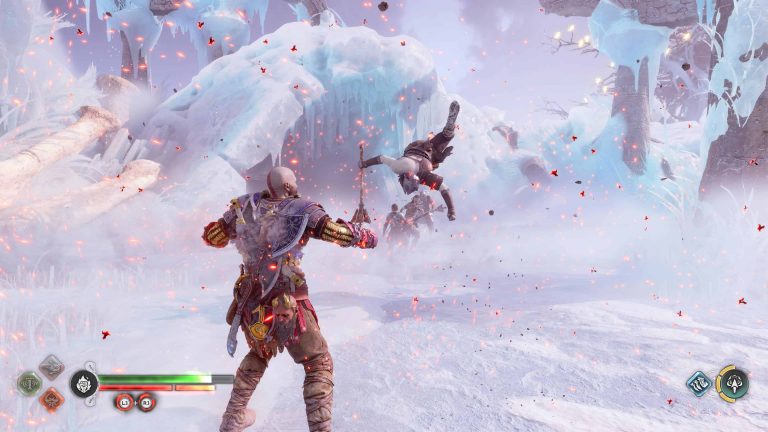 God Of War Ragnarok's training arena is in Niflheim in front of the shop. Players can fulfill weapon skill requirements and practice there.

God Of War Ragnarok’s training arena is essential for streamlining through the countless enemies in the game. Enemy health bars become sponges during the endgame and to reduce the grind of 100 percenting the game, practicing beforehand is important. Instead, if you’re looking to maximize combat efficiency early on, take a look at the best skills to invest XP in.

The training arena is a simple yet necessary addition to Ragnarok’s combat system. Players unlock the training arena relatively early into the game when realm travel is first unlocked. Players looking to improve combat capabilities, practice specific weapon skills or learn enemy attack patterns should take as much advantage as possible of the training arena.

Where Is The Training Arena

When players enter Niflheim for the first time, they’ll be greeted by Brok and Sindri’s shop. Not far into the distance is the Raven Tree where players completing the Eyes Of Odin quest can collect their reward. The Training Arena is right in front of the shop and to the player’s North-West when they exit the realm travel portal.

How To Practice Efficiently

At the barebones, the training arena is simplistic and doesn’t hold much value beyond initial experimentation. However, it is especially beneficial for novice players or those playing with the hardest difficulties. This is because the enemies progressively become more difficult to deal with and have complex attack patterns.

To summon enemies, players interact with the frozen pillar in the middle of the training arena area. Using this terminal, players will initially be able to only summon Draugrs to fight against. Draugrs are arguably the easiest mob to fight but even they prove to be tough at harder difficulties.

As players progress in the game and encounter new enemies, they will also appear gradually in the training arena terminal. Players are then able to choose which enemy to fight against and learn the attack pattern. Additionally, Kratos has reduced cooldown periods for weapon skills and infinite health.

The final benefit of the training arena is that it counts as in-game combat encounters to unlock or upgrade skills with requirements. Skills such as Leviathan’s Fury require players to use it 30 times in combat to progress to the next available skill upgrade. Using the training arena, players will not only be able to hone their skills but also progress skill requirements.

God Of War Ragnarok has surpassed the original 2018 entry in every department and has the sales numbers to prove it. Issues such as enemy variety, repetitive quest structure, and combat fluidity have significantly been improved. Unfortunately for new players, this also means Ragnorok is in some ways more difficult than its predecessors. This is where God Of War Ragnarok’s training arena comes into play.

Without diving too much into spoilers, the enemies you encounter in Ragnarok continue to get harder. Weapon upgrades and skills will only get you so far into mastering the combat and you will need to perfect certain movesets. Skills such as Whirlwind Sweep are easy to skip unless players deliberately practice using it.