In this guide, we discuss some of the talent behind your favorite characters in the new God of War Ragnarok. 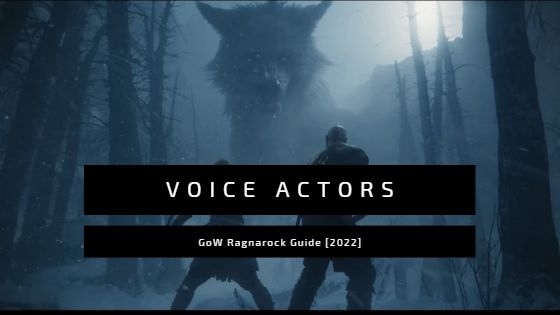 God of War Ragnarok has recently been taking the gaming world by storm. There would be no action blockbuster game without talented voice actors and actresses. In this God of War Ragnarok Voice Actors article, we will talk about some notable characters and the people who gave them life with their voices and acting.

We define the main cast as the players who move the story forward alongside the playable characters. This naturally includes Kratos and Atreus. Alongside the story’s antagonists, such as Odin and Thor.

We would also count some characters like Mimir and Freya as part of the main cast simply because they have insane dialogue and screen time to add to the narrative in some meaningful way.

Where would we even be without Kratos, our favorite God of War? It’s pretty interesting what the franchise has gone through in the past few years. We all remember the hack-and-slash, high-energy violence that God of War was known for in its prime. However, something interesting happened.

The game matured. Not in the sense of simply time passing but rather in understanding that the characters had also passed through different stages of their lives. This was not more apparent than in Kratos, as he was now a mature man.

He was a man who had made mistakes in his past and learned from them so that a day where he would repeat them should never arise. Kratos in the God of War Ragnarok is quite like a sage. Someone from whom you could extract wisdom.

The wiser character of Kratos is played and voiced by Christopher Judge, the man with the voice to move mountains. His dialogue and line delivery are on point in every scene and enhanced by the cast surrounding him.

The new franchise would not have been as successful without the near-perfect casting of Christopher Judge as the God of War Ragnarok voice actors.

As the son of Kratos, Atreus has some big shoes to fill. He is the resident newbie and child of the group. In the first God of War, he was nothing more than a whining child who would often be taken over by his emotions and crude understanding of the situation.

However, in God of War Ragnarok, he has matured and developed. He is now more reliable and can think of things critically. He can assess a situation more calmly than before but is still prone to fits of emotion taking over his being.

In that sense, we can say that he genuinely is Kratos’s son, considering how he used to be back in his glory days under the gods of Olympus.

Sunny Suljic plays the fun-loving and charismatic Atreus. He is the perfect one to play this role since we know that time has passed in-game and in our world. He has matured, and so has his voice.

Gone are the days of high-pitched whining and crying, now replaced with a more gruff voice that also whines occasionally. A fit for the God of War Ragnarok voice actors of Atreus, also referred to as Loki, in this game due to the events of God of War.

Mimir functions as the storyteller of the group. Where Kratos gives sage advice that goes over Atreus’s head most of the time, Mimir translates it into something more digestible for the boy. Whenever they travel without fighting for some time, he pipes up to lighten the mood and tell a tale from his own life or someone else’s.

Now, he still maintains the same role but is instead a bit more all-knowing than last time and more mortal as we shed some light on his past mistakes that he had made. Proving to us, the audience, a way to connect to him and sympathize.

Being in the entertainment industry since the early 90s and have been around the block on animated characters and voicing them. Due to this fact, Alastair Duncan is adept at portraying a wide range of emotions through his voice and the inflections it can create.

Perfect for portraying Mimir in the God of War Ragnarok game, considering that for most of the game, you only hear Mimir talk and rarely see him be the focus of a cutscene.

Due to the events of the past game, she is focused on as the game’s antagonist for a short while but not considered the big bad. To explain, she is more like a villain that occasionally comes along to fight you and disappears afterward, knowing they will return to rechallenge you.

The loss a parent feels after losing a child is probably something many people will never have to experience. We see how this loss of love can easily be transformed into hatred given the right conditions and how one can overcome it with a good network of people who support them.

This is Freya’s story of grieving, which turns into hatred, denial, acceptance, and forgiveness.

Danielle Bisutti has been in the industry for quite some time now, and in that time, she has made quite a name for herself. Her voice in God of War exudes a calming tone when she is sincere but can be confused for the cry of a banshee when you try to harm anyone she considers family.

Truly a role meant for her voice and personality, resembling a caretaker and a warrior. A proper motherly role.

As teased in the after-credits of the first game, Thor makes his appearance, and what a memorable entry it is. He emanates an aura of power and someone not to be messed with, although a soft interior exists to the giant. However, this only works for those he is close with, such as his wife Sif and his daughter Thrud (whom we discuss later in this article).

Thor reminds us of the old Kratos, an image of a man bound by the will of those above him. Making him like a dog since all Odin uses him for is destroying things.

Odin is the main antagonist of this story. He is a master manipulator with a silver tongue, capable of convincing even the most untrustworthy people to believe in his lies. A king among con men and a seeker of knowledge.

He plays a prominent role in the story as the driving motivation for the entire cast. His impact on the world and characters can be seen in different shapes and forms throughout the nine realms.

We can define supporting characters as accessories to moving the plot forward or aid in doing so, such as Angrboda with Atreus in Ironwood and Freyr with Freya.

Many of the supporting cast is given some screen time, but that is mainly for the development of our main cast, which is slightly sad considering almost everyone has quite an engaging personality. They are worthy of being part of the main cast if not for the major players involved.

Freyr is a lovable goofball and the comic relief character for most of the time we know him. He has a severe side but is quite jolly, making him hard to distinguish from an average person, even though he is considered a Vanir god.

He gets some character development but is mainly there to be someone who helps develops Freya’s character and navigates her turmoil. Not the worst feeling by a long shot, and Brett Dalton was the perfect choice to cast for Freyr in God of War Ragnarok voice actors.

Angrboda acts as a guide to Atreus when he is confronted with his giant heritage. In the first game, we explored the side of Atreus, which came from Kratos, a god of war. Back then, he had Kratos to guide him through the trials and tribulations of being a god while not letting this knowledge get to his head.

Here we see that after maturing slightly, Atreus is now ready to learn more about his giant side but seeing as how most of the giants either left for different realms or were killed doesn’t give Atreus much to hope for in terms of guidance. This is where Angrboda, the last of the giants, comes to his aid.

Acting as the first time Atreus can talk and relate with someone of his pedigree, Thrud offers a glimpse into what friendship looks like between two people of a similar age. She is the daughter of Thor and Sif.

Seeing how Atreus killed both of her brothers, there is some resentment beneath the surface but not overt. Her entire character arc is given to us in pieces, but it all culminates with her going off to find meaning through her actions and learning to be better than those before her.

The most arrogant and smug character we see. Heimdall has a charm about him that makes you want to bash his teeth every time he utters a single word from his mouth.

The cocky and snobbish attitude he emits makes us hate him in an almost endearing manner. He is still the right hand of Odin and, as such, is willing to take a stand against all those who oppose the All-father and his wishes, as seen when he is first introduced to Atreus in Asgard.

A reliable blacksmith and one of the fan-favorite supporting characters from God of War. He has the personality of an old man who isn’t afraid of anything, including the grim reaper. He wears his heart on his sleeve and doesn’t shy away from letting you know what is what.

A great person to have on your side and an even greater friend. You could even say that Brok was the first friend Kratos made since meeting his wife, Faye, in the new world.

It’s sad to see that he would be taken away from us so suddenly, but it allows us go cherish the time we spent with him, and in a way, this event helped move the story forward and marked it as a point in time where things would never be the same again.

The second half of the dwarf bother duo. Sindri is a fantastic character in his own right. Where Brok is rude and brash, Sindri excels at being diplomatic and courteous with his approach. H doesn’t let out his feelings but bottles them up and maintains a professional exterior.

This sadly crumbles after Brok’s death, where he goes through a transformation in his personality. He swore off his pleasant demeanor and adopted traits similar to that of his brother, possibly to honor his legacy and fond memory.

One of the best character arcs in the game and is indeed brought to life by one of the most underrated God of War Ragnarok voice actors of all time.

God of War Ragnarok Voice Actors is a cast that you would be hard-pressed to call anything other than talented and committed to their craft. Now that they have made their mark on the franchise, we can’t imagine anyone else taking up the mantle for their respective characters.