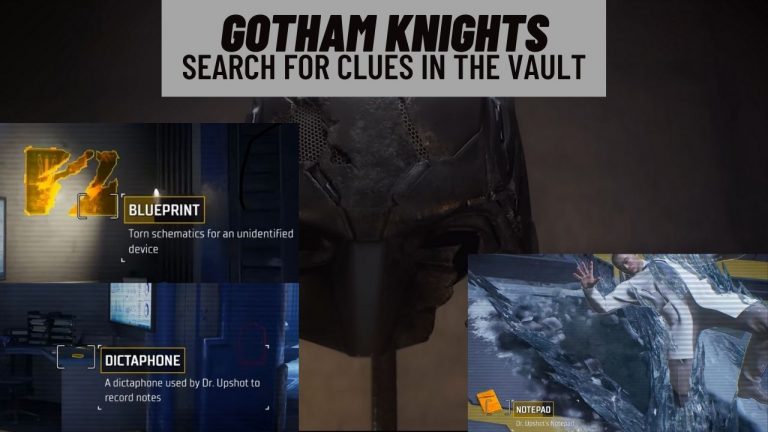 Gotham Knights Search For Clues In The Vault [Guide]

Finding the Clues in Quartz Lab is a simple task, however, you need to ensure that it's a stealth mission!

“Gotham Knights Search For Clues In The Vault” is a detailed guide that will go through all the clues you need to search for in the Vault. To all the batman fans out there trying out Gotham Knights to play Batman, there is a plot twist you all must be prepared for.

The new sequel does not feature Batman because, apparently, he’s dead; instead, you get to play Robin, Red Hood, Nightwing, and Batgirl. There is a mission that requires a bit of detective work. You need to search for clues in the Quartz Lab vault, and we’ll help you find them.

As Batman is dead, you have a list of specially trained characters who’ll help you defeat enemies and bosses and find clues along with scattered collectibles in Gotham Knights.

The collectibles are scattered across the map. The good news is you’ll have no problem accessing any part of the map because it will be available from the start. As for the clues, you’ll have to find three clues; A Bluprint, Dictaphone, and a Notepad. All of which is considerably easy to find.

Gotham Knights Search For Clues In The Vault

The first thing you need to do is access your case files and select the one named FR01: MR.FREEZE. Under this section, select “Quartz Labs.” The next step will be to head toward the Quartz Lab in Gotham Knights.

You need to be aware of guards standing watch around the area and take them out before they make things difficult for you. There are two guards on one of the smaller buildings and one next to a water tower on the right, and four guards on the ground. Think of it as a stealth mission, so you don’t become the center of attention.

An easy way to take them out is by clearing the ones on the roof and striking down the remaining guards on the ground. Afterward, enter the building and head toward the Vault through the vents. There are five more guards below you and more inside the building. Clear them out without grabbing any attention.

Fast forward to searching for the clues; when you enter the Vault, look behind and analyze the dead, frozen scientist.

The Blueprint will be in the same vicinity hanging on the wall to the right side of the scientist. Analyze it and look on the left side to find a Dictaphone next to an LED Screen.

You will have to play the Dictaphone to listen to the recorded notes by Mr. Freeze.

The last clue, the Notepad, will lie next to the scientist’s dead body. Now you need to find a fail-safe mechanism, the Disruptor, hidden inside Mr.Upshot’s office.

When you walk into his office, move toward the right side, and you’ll find a hidden compartment on the floor. Analyze it, and you’ll be given access to a false floor. The device will be connected to a machine to disrupt it, so you must pick it up.

That was the final item you needed to finish the Quartz Lab mission, and Alfred will guide you back to the Belfry for further instructions. After completing the Case File, you receive a trophy called “Quartzer Life Crisis.” Why were we searching for clues? Well, there is a main boss that goes by the name of Freeze who’s behind these killings of scientists and many other evil things. Getting the clues will get you a step closer to Freeze.

That was all for the complete guide on Gotham Knights Search For Clues In The Vault. As you already know, it was an easy side quest. However, some players could not find some of the clues left in the Lab despite how easy they were to find.

If you want, you can check out related guides on Gotham Knights or maybe other games on VeryAliGaming, a platform where you can find all the problems to your solutions!