If your looking for a list on all the main missions in GOW Ragnarok with worthy side quests, then you have landed on the right page. 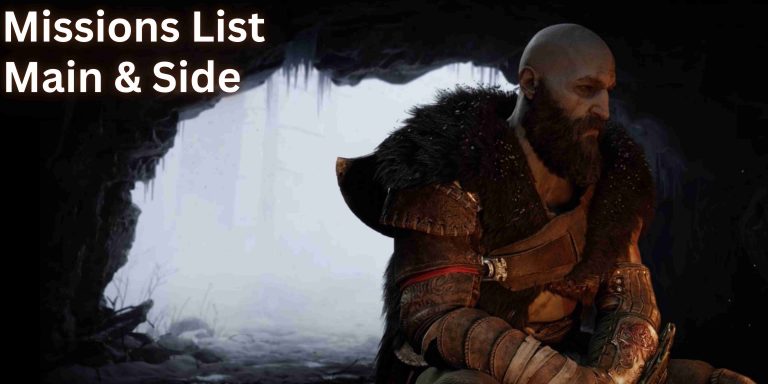 Our guide presents you the list of all main missions chronologically arranged, in GOW Ragnarok, including some crucial side missions in order along the campaign, with a bit of their description and the rewards you can get upon completing them.

Without wasting any more time, let’s get right into the guide.

Warning: The list below contains some story spoilers from the primary missions of the game campaign.

The primary storyline campaign of the GOW Ragnarok has 18 main missions or quests in-game, also called The Path. Finishing The Path missions will end the campaign part of the game. Here are their names listed below with their ending rewards players can get:

The beginning of GOW Ragnarok. You get to command Kratos and travel across a winter zone terrain with assistance from a sled and two wolves. Adding on, you can also do this mission easily without difficulties.

The Quest For Tyr

In this quest, you will be hunting Tyr, the Norse God of War. Located in the realm of Svartalfheim, you will have to deal with marshlands, brutal dwarves, and dangerous traps as you navigate this walkthrough.

You will now play as Atreus in this mission, accompanied by Sindri, as they try their best to hunt down the enraged Freya.

Back to playing Kratos again in this quest; you will embark on a path to the realm of Alfheim. It starts with Kratos arriving at the Mystic Gateway and entering the Strond after a quick talk with Ratatoskr.

It starts after Kratos returns to Brok and Sindri’s house after a dangerous rendezvous in the Tower Of Light. This story takes place across the realm of Jotunheim, where Atreus also has a strange encounter with a lively woman called Angrboda.

This mission has no rewards.

This mission features a returning character, Freya, who crosses paths with Kratos. They both continue their path to Vanaheim, looking for a way to break off the curse set on Freya by Odin, which traps her in Midgard.

Followed by a heated argument between Kratos and Atreus in The Reckoning; this begins with Kratos and Freya departing Vanaheim and Atreus escaping Brok and Sindri’s home to make his independent journey through Midgard.

Once again, you play Atreus as he becomes the center of attention in this story as he navigates through Muspelheim, a realm filled with fire everywhere. Seeking to find the truth to his questions, he uses the mask given to him by Odin to guide and assist him.

The Word Of Fate

This mission is halfway through the campaign’s primary mission in the game. You get to play Kratos again as worries and fears are at a high level, with Atreus vanishing from the previous quest, but as always, Kratos devises a strategy to get him back. Subsequently, Freya resents Kratos for this plan, but he hunts for the Norns in Midgard for solutions.

It continues with Kratos and Freya on a quick search through Svartalheim to upgrade Draupnir into a weapon to duel against Heimdall in Asgard, who is planning to eliminate Atreus, so the duo both land their best efforts to reach Asgard as fast as they can.

Atreus and Thrud are on a mission through Heilheim as they hunt for the one last piece of the Mask of Odin. Meanwhile, the unknown Kratos makes his way back to Sindri’s and Brok’s home and asks Sindri if he found a route to Asgard, which, unfortunately, he cannot do even after all his efforts. As a result of the setback, Kratos tries to rest throughout the night.

With the Hel-Hound, Garm unleashed and spreading chaos and devastation globally, Atreus arrives back to Midgard after spending a long duration in Asgard. However, he is terrified to face his father, but Kratos gives him a warm reception.

It occurs again in Vanaheim, where Atreus and Kratos combine joint efforts with Freya to search for her twin-brother Freyr, who gets abducted by the hands of the captains of Einherjar.

Getting to play Atreus again, accompanied by Thor, they travel through Niflheim and Asgard to search for the last missing piece of Odin’s mask.

After the shocking aftermath of Unlocking the Mask, Atreus and Kratos search for the missing Sindri in the entire Midgard.

In this second-last mission, Kratos and Atreus attempt to reach Surtr’s forge via Muspelheim to follow his lead and get near the ashen man.

The Realms At War

Realms At War is the second last mission in GOW Ragnarok, featuring the final boss battle of Atreus and Kratos with Thor and Odin throughout Asgard and Midgard.

This mission is unlocked after you finish The Realms At War and after the post-credit scenes. It starts in Midgard and is on the 18th number in order. However, the game does not show the full completion of this quest. It is necessary to complete all 46 side missions or Favors if you wish to finish Beyond Ragnarok.

Warning: The secondary quest’s list below also contains some spoilers.

After the main missions, you can attempt 9 of these fundamental side missions in the game to obtain the best loot. In-game, these are known as Favors. They are essential to interact with secondary characters and grab many rewards. Below are the names of these side quests with their top-notch quality drop-off rewards:

In Service Of Asgard

The first side mission in-game, starting in Svartalfheim. It provides the best early-game armor for Kratos.

Secret Of The Sands

This quest takes place in the realm of Alfheim. Linked to the weird noise Atreus heard and briefly notifies everyone.

Song Of The Sands

You can do the Song Of The Sands upon finishing the secret of the sands and the path quest the reckoning.

Find the orb and return it to the dwarf Lunda.

This mission is all about Freya. She, Kratos, and Atreus journey through the place where her wedding took place.

In this quest, you must retrieve Durlin’s hammer and return it to him.

It starts right after the spirit of rebellion quest in the realm of Svartalfheim.

This mission occurs in The Raven Tree in Niflheim as soon you cross a recently constructed bridge, where you will have to search through a ruined prison.

You will be running behind Helka and get to control a boat of paper in this mission.

To sum it all up, this brings us to the end of our missions list guide. We hope that with the help of this guide, you will get a chronologically ordered scope of all the missions in-game with the best rewards you can get from the featured critical side quests/missions.

Do give us feedback down below in the comments. If you are also interested in watching the entire cutscenes movie of the game, here is a video we recommend you watch.

Since you have made it this far, be sure to check out our other GOW Ragnarok guides prepared for you in detail and up-to-date to step up your gameplay: