God Of War Ragnarok: Secret of the Sands Walkthrough

A Step-by-Step Process to Complete the first Side Quest in Alfheim, Secret of the Sands 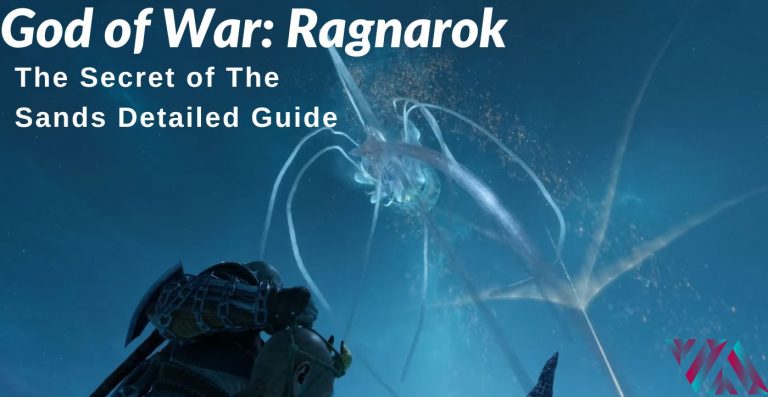 Complete guide on how to finish Secret of the Sands Favor

Alfheim is one of the 9 realms of God of War: Ragnarok. After entering Alfheim, the first Side Quest or Favor you will be taking part in is called Secret of the Sands.

The Secret of the Sands Favor is unlocked after completing the story mission Groa’s secret. Atreus hears some noise from a hurting monster in the desert, so Kratos goes with him to rescue that monster.

Your main objective will be to experience the area of Dark Elves and make your way toward the pained creature.

This Secret of the Sands walkthrough will guide you to complete this Favor with the best combat strategies and also, collect all the possible loot as you make your way further into the Favor.

The Highlight Before Secret Of The Sands

At the end of Groa’s Secret, when Tyr tells Kratos to open the gateway, a Dark Elf comes from nowhere and crashes into a wall making a way into The Grand Canyon.

Tyr sees himself out, but Kratos and Atreus move forward. When you go through the broken wall, make sure to collect the treasure map lying on the floor.

Move forward from the crashed site towards Sindri’s shop in the middle of a large, deserted area. After having a conversation with him, this favor is automatically added to your list (check from the main menu).

How To Start Secret Of The Sands Favor?

Moving further into the desert, you will see two unknown creatures joined to a sled. Jump on it with Atreus and continue moving. Going forward, on your right, you will see a loot chest containing some Hacksilver, don’t forget to open it!

As you move forward, you will start to see more of the desert and a new region will be discovered.

After discovering The Barrens, open the map to see where you are headed.

The map shows your locations as a red marker and the Secret of the Sands Favor location as a blue marker. Head towards the Southeast to reach the blue marker. When you are close to it, you will start to see a big cave-like structure in front.

Move around it a little to look for the entrance. Leave the sled outside and continue the rest of your journey on foot with Atreus.

The First Phase Of Secret Of The Sands

This marks officially the start of your side quest. To make your way downward and deeper into the cave, jump across to the other side by using your Blades of Chaos. On the other side, you will discover a new region.

At this point, you will start seeing Hive Bulbs that look like:

Break the chain-like glowing piece by throwing Kratos’ axe. Moving forward, you will meet your first Dark Elf ready for a quick fight.

Don’t forget to break the scattered crockery pieces on the ground to get some extra Hacksilver.

Now, you might notice no path forward, if you look down, you will see 5 hive bulbs. The trick to this puzzle is to crush all the hive bulbs in a single throw. To do this, you need to toss your axe at an angle where the blue line starts appearing.

After crossing the blocked path, you will face a couple of Dark Elves. Defeat them, then grab the loot from the chest to your left.

Finding A Way Inside The Cave

Going inside, you will face 4 more Dark Elves. You might notice one of them with a different type of Armor. That is the Dark Elf summoner that can summon more Dark Elves to make the fight harder. A better approach is to kill the summoner first, so you don’t get crowded and find your way out easily.

Finding your way forward, you will see some more Hive Bulbs blocking your way. To get them all in 1 shot, you will climb to high ground from a spot between 2 big doors.

Up there, you will kick some piece of metal then take a direct shot at those Hive Bulbs to open the path for you. A bonus suggestion for you; as you look up, you will notice a bell hanging from the roof. Throw your axe on that, and collect the unique resource dropped from it.

Grab some extra loot by throwing your axe again on the faraway small creature which provides you with some Dwarven Steel and Stonewood.

Also check out: God of War: Ragnarok Tips and Tricks

Moving Closer To The Pained Creature

As you climb down, you will see discover a new Rune Read, which indicates that we are on the right path. Open the loot chest in front of you. Make your way back up to the top and follow Atreus to an opening outside the cave.

Cross to the other side of the cave by using this rope. Jump down to your left, collect loot from the chest, and climb back up. You will see 3 more Hive Bulbs that need to be taken care of.

To find the perfect angle, use your Blades of Chaos to climb and move to the other side. Toss your axe by bouncing it off from the purple region on the mountain, to destroy all 3 in a single shot.

Next, move down towards a wooden gate where you will kill multiple crawling creatures.

At this point, you are very close to opening the Nornir Chest but not there yet. After opening the wooden gate, go back up and climb to the high ground on the other of the Hive Bulbs. You will see another door, open that from the inside.

After getting the 2 gates open, you have to hit 3 Nornir Bells with your axe as quickly as you can to open the Nornir Chest. Start from the highest bell.

After hitting that, ascend down towards the second bell just outside the gate.

After hitting that, look inside the cave where you will see the bell to your left, hit that as well.

After hitting all 3, you will now unlock the Nornir Chest which will contain either an Idunn Apple that increases Kratos’ maximum health or a Horn of Blood Mead which increases Maximum rage.

To know more about how to heal in God of War: Ragnarok, click here

One Step Closer To The Pained Creature

After opening the chest, climb up using your Blades of Chaos towards the other wooden door. Head inside the cave and slide down from a chain where you have another fight with a Dark Elf Lord.

The fight might take a while but once you are done with it, you will receive health and rage from defeating the Dark Elf Lord. Follow Atreus toward a blue-lit tunnel and get out of there.

You will see a blockage in the front of you.

Move down towards your right. Behind the blockage, you will see an explosive object, throw your axe on it to destroy the blockage.

After that, you will see a similar type of blockage to your Northeast. Break it by throwing your axe at the explosive object on its side.

To destroy the 3 Hive Bulbs on the right, throw your axe again on the purple-looking region.

Open a loot chest in front of you then make your way down and forward.

Deep Into The Hive Bulb Cave

As you follow Atreus toward another opening, a new Hive Bulb pattern is seen to your right. To counter this one, stand at an angle where you hit one of the bulbs face-front and behind it is the purple region from where the axe bounces back and hits the remaining bulbs.

As you jump to the other side, look to your left where you see another one of those green blockages. Toss Kratos’ axe on the explosive object to get rid of it.

Open the loot chest in front to get some extra Hacksilver.

Move over to the side where you removed the blockage from. Looking up, you will see 2 purple regions. Throw your axe on the left region. It will hit the middle Hive Bulb and also finish the remaining ones.

Make your way forward by climbing up and collecting loot from the chest. You will see a golden lamp-looking object in front of you that has twilight stone engraved in it. Rotate the object once then throw your axe on the stone so that it bounces off and hits all the Hive Bulbs to open a path for you. Make sure to toss it after you see a blue line just like this.

At this point, you will have a minor fight with the Nightmares.

After defeating them, you will see white marks on the wall in front. Climb that wall to finally reach the pained creature, also called The Hafgufa.

We are almost at the end of this mission. The last thing to do is free this trapped jellyfish creature by destroying the remaining Hive Bulbs and other traps. The green blockage to your left can be removed by tossing your axe on the explosive object behind it.

Then, move down to destroy the Hive Bulbs by throwing your axe in a way that it bends by following the blue line.

The first step is done. For the second step, remove the Hive Bulbs above by bouncing off Kratos’ axe from the purple region in the wall.

The last thing left to do is go back to the surface by escaping the cave and ending the Favor. Move out and open the final loot chest. Climb up to some high ground where you will see a crooked opening in the ceiling; break through the ceiling by using your Blades of Chaos.

In front of you will see The Barren’s Legendary Treasure.

In there, you will find your crafting component called the Whispering Slab and the Shoulder Straps of Radiance. Collect all the Hacksilver around you. Break the last Hive Bulb above you and climb the ledge to hop on the sled.

Keep sliding forward till the point Atreus stops you and you see a red glowing object.

Destroy the structure to free the largest Hafgufa ever seen and complete your Side Quest.

Secret of the sands is a very straightforward Favor where you aim to rescue the pained creature trapped in the hive matter under the cave. Kratos and Atreus fight the Dark Elves to make their way through the Hive Bulb cave to reach the pained creature and free it.

We hope you enjoyed our step-by-step guide to the Secret of the Sands Favor. If you want more helpful guides like this, visit our website.