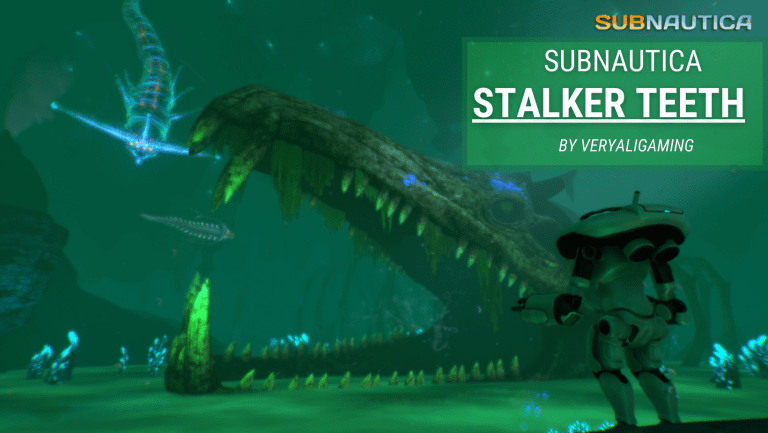 How to Get Stalker Teeth: Subnautica Full Guide

Gathering Stalker teeth can be a hassle for newer players. Worry not because this guide will teach you everything about Stalkers and make life much easier for you.

Subnautica is filled with secrets that the game doesn’t tell you about. The player must play through the game to figure out how to get certain items and what they have to do next. One of these items is the Stalker Tooth. Today’s guide will focus on how to get Stalker Teeth in Subnautica.

Much like everything else in Subnautica, you have to carefully plan your moves around these creatures otherwise they can prove fatal. They are commonly found in the Kelp Forest – where you should set up your base to make the collecting process easier.

Without further ado, let’s get right into the guide about how to get Stalker teeth.

The ocean can be quite terrifying, especially for newer players. Stalkers swim around various biomes and are highly aggressive towards other life forms. To make this easier, make use of this guide and collect tons of Stalker’s teeth to craft rare items.

Where to Find Stalkers

Stalkers are aggressive creatures in the world of Subnautica. They have 300 health and deal a total of 30 damage. They are usually considered early game creatures, so you do not have to worry about them that much. Typically, you can find them right at the start of the game in the Crash Zone. They also lurk around in the Kelp Forest and the Kelp Forest Caves.

Stalkers are active for the entire day, whether it’s daytime or nighttime. Their look is quite intimidating, and players might want to steer clear of them if you are just starting. They pack a mean punch if you are unprepared to deal with them.

What are Stalker Teeth Used for?

The Stalker Tooth is classified as a raw material that is required to craft other rare resources. You can only acquire it from the Stalker, and they are dropped in a precise quantity. You may find certain recipes that require a Stalker tooth to craft it.

The main use of Stalker’s teeth is to get Enameled Glass. You have to put the tooth and glass inside a Fabricator to craft this. If you use the Stalker tooth in a Bioreactor, you will gain 70 energy – which is quite decent if you are near the start of the game.

How to Get Stalker Teeth in Subnautica

Now that we know what these teeth are used for and where you can find the Stalkers; the next question is how you can get their teeth. I’m afraid it isn’t as easy as killing a Stalker and taking its tooth. You have to take a planned – and preferably cautious – approach. Stealth is your best friend in this matter. Stalkers drop one of their teeth when they pick up various items. These items usually include Titanium or Metal Salvage.

You can easily collect tons of Metal Salvage right as you start the game at the Crash Site. You can even find some in shipwrecks and mobile vehicle bay locations.

Once you have collected enough materials, find a Stalker hideout and put down 3 pieces of Metal Salvage. After putting it down, I recommend waiting patiently at a safe distance so the Stalker won’t spot you. If everything goes according to plan, the Stalker will pick up the metal remains and, in the process; hopefully drop its tooth.

You can leave multiple Metal Salvages around one Stalker to potentially get more than one tooth. There are better ways to collect these teeth in the future, like using an armored Prawn Suit or a Seamoth submarine. The Stalker will slam into you and drop a tooth while it hits you. You can also try the aggressive approach and hit the creature with your submarine or shoot it, hoping that it loses a tooth – quite literally.

No matter which approach you decide on, there can only be a certain number of teeth dropped by a Stalker. If you are not getting lucky and the Stalker is not dropping its tooth, you should swim around to see if it hasn’t already dropped it somewhere nearby. Once you’ve advanced enough in the game, you will be able to locate the teeth by using the Scanner quickly. This will make your life much more accessible, but getting to that point can take some time.

The process can take some time getting used to if you are new to Subnautica, but once you get the hang of it, you’ll have so many Stalker teeth you won’t know what to do with them. The stealthy approach is recommended for newer players since it can be dangerous to tackle the Stalker head-on. Also, you probably won’t have the required stuff to go ahead with the aggressive approach either way.

That about does it for today’s guide about how to get Stalker Teeth in Subnautica. Let me know if you found it easy to collect Stalker teeth in the comments below.