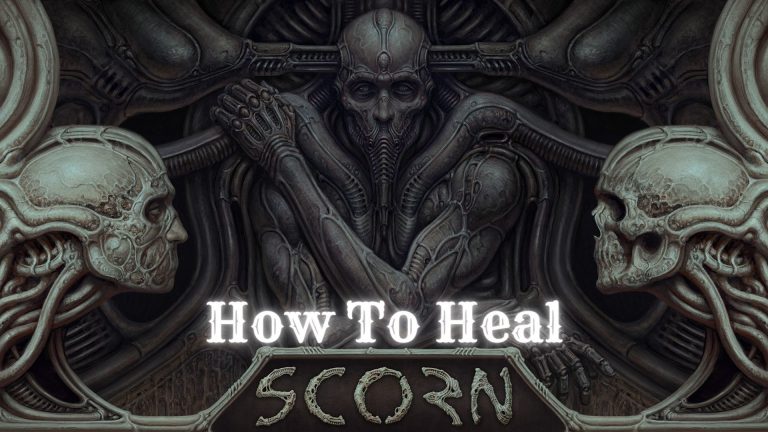 Scorn: How To Heal [Explained]

Scorn, a brand-new survival game, has just been released, and players are struggling to figure out how to heal. Players are forced to fend for themselves when playing this game because of how unclear it is on some subjects. Use this tutorial to learn how to heal, regenerate more of those health orbs, and eventually live in Scorn to fight another day.

Scorn is as stunning as it is revolting. The game is inspired by the works of visual artists H. R. Giger and Zdzisław Beksiński, the player assumes control of an unnamed, skinless person. Huge constructions made of metal, flesh, and bone, as well as twisting, dark corridors, and the desolate relics of a long-gone civilization, are all present in the environment.

Players in Scorn need to pay great attention to every aspect in order to obtain indications about what is happening because of the game’s visual style. The players will come across a variety of monsters in the lonely wasteland as they progress farther into this tortuous maze of fear, which they must either kill or avoid.

Everything in the game is biomechanically designed, including weapons, bridge controls, and elevators. Since health is one of the game’s most crucial commodities and gives players the ability to heal during combat with some particularly dangerous foes, players will require the ability to heal.

Healing may not seem key early on in Scorn, but as your progress and complete more of the game’s chapters you will realize that healing is one of the most important parts of Scorn. Enemies do not die easily so; you will often find yourself on low health as you try to survive.

How To Get The Ability To Heal In Scorn

As soon as you turn on the bright red pods in the second alien building on your adventure, you have the power to heal in Scorn. Approach the pod up ahead after inserting the key into the pod interface.

To get the bulbous mound of flesh with tentacles sticking out of it, use the console to its immediate left. Surprise! This is your healing tool, despite the fact that Scorn never fully defines what it is, and just like that, you have the ability to heal.

Now that you have the means to heal, let’s teach you how to heal in Scorn.

How To Heal in Scorn

Scorn’s default binding for the heal command is the E key on PC (you can rebind it from the menu of course) or the RB button on Xbox, however, using this command depletes the red orbs or engorged bulbs you’ll earn as rewards.

It is clear to players that this is a survival horror adventure since healing only restores two bars to your health meter on the top left of the user interface (UI). To maintain as much health as possible throughout your trip, health should be properly rationed, and more importantly, you should think carefully about how many monsters you decide to battle.

How To Get More Health Charges

You won’t find a lot of ammo in Scorn, and your character isn’t too good in battle. As a result, you’ll probably require more health charges very frequently. You can only use eight charges total on your healing tool. When you pick it up, it’s also entirely empty, so you have to locate your own equivalent of a blood bank in order to really utilize it.

These weird terminals are dispersed around the area, typically hidden away in remote, shadowy locations. Because they are somewhat uncommon and one-use only, be careful to examine the area to make sure you don’t miss one.

One blood bank provides you with around three or four charges, for a maximum of eight charges. You can see the number of charges you have at any time by aiming with your weapon or opening your inventory. The charges you currently have are represented as nodes above your health bar.

Since there is no communication in the game, the environment serves as the main source of narrative. This is a very exciting idea because it gives each player the freedom to make their own interpretations of their surroundings. Additionally, it implies that they are just as important as the user controls.

Scorn was released on October 14, 2022, for PC through Steam and Gamepass, and Xbox Series X|S. It is also a Day One Xbox Game Pass exclusive. Since you’re here check out our Scorn Achievements Guide. Thank you and see you soon on another article.