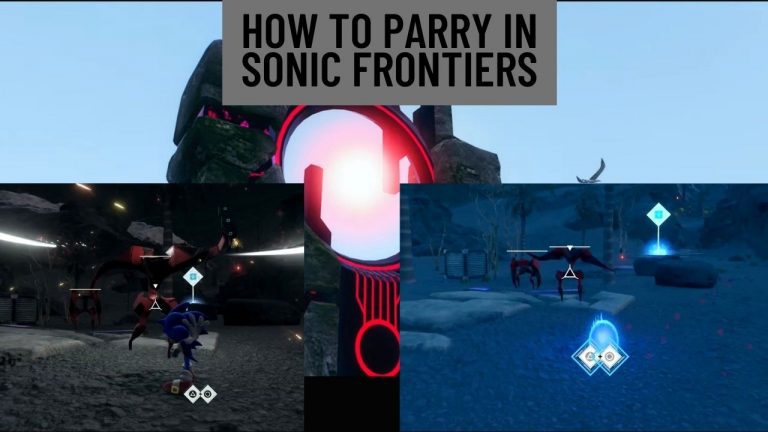 How To Parry In Sonic Frontiers [Full Guide]

There are different techniques and skills you can use to play at an advantage. Moves such as the Parry, Dodge, and Attack, allow your character to deal powerful blows to the enemies!

You all had this particular question in mind when you clicked on my “How To Parry In Sonic Frontiers” guide. However, before we start, you need to know that parrying is not so hard in Sonic Frontiers in fact, it is as simple as it can get!

Without wasting any time, let us hop right into the guide and ensure that you people don’t die very often!

How To Parry In Sonic Frontiers

Sonic is our favorite speedster, and as you all know, his attributes are his incredible speed and agility. In Sonic Frontiers, your enemies will be the cybernetic Guardians, and they will not hold back their punches! Therefore, you need to learn how to dodge their attacks.

The simple and foremost easiest method is to Parry. You can hold down the L and R buttons on your Nintendo Switch Console to perform a Parry. While you’re in a defensive stance, Sonic will automatically parry incoming attacks; this means, you won’t have to time your parry at all!

For instance, let’s suppose Sonic is facing two or three enemies. Due to how fast the game is, you won’t have enough time to think and might make mistakes and lose your rings.

The story behind losing rings is that when your character (which is Sonic) is hit by an enemy attack, he’ll lose rings that will scatter around the playing field. When you have a maximum number of rings sonic will gain a speed boost. However, losing them will make you lose your speed boost. And what could be the worst way to lose rings? Getting hit by enemy attacks of course!

Evidently, you can avoid that by parrying. It will also allow Sonic to counterattack and deal immense damage to the Guardians or his adversaries. The defensive stance is highly effective if you hold down the dodge buttons unless you stop, enabling you to dodge and throw a hard blow!

It can be associated with an impenetrable wall that prevents Sonic from taking any damage whatsoever. Heck, you don’t even need to practice the move!

Related: If you’re more into minigames, check out our “Sonic Frontiers Fishing” guide to learn about the exciting rewards and items you can obtain by fishing!

How To Dodge In Sonic Frontiers

Apart from parrying, your character can also dodge enemy attacks without counterattacks. When it comes to dodging in Sonic Frontiers, there are two types of dodge moves;

There is also one thing you need to learn about the fighting mechanism in Sonic Frontiers. The auto lock features will allow Sonic to target a single enemy instead of mixing his attacks with different enemies.

What I mean by that is, you can lock on a certain enemy and focus all your attacks on him. To lock on an enemy, you need to press the Right Analog Stick on your Nintendo Switch. If it doesn’t work, your settings may be different, so try pressing the Y button!

Let us talk about the types of Dodge in Sonic Frontiers. To evade, you only need to press the L or R bumper. It will allow Sonic to move swiftly in the intended direction. However, it will only work when you’ve locked onto your enemy.

To perform a Cartwheel Dodge, you need to press the L or R bumpers. The dodge will only work if Sonic is standing still and not moving around the plain. Evading and Cartwheel Dodge can prevent Sonic from serious harm. Therefore, you must ensure you learn these moves and use them in your fight against Cybernetic enemies!

If players are uncertain about the controls or buttons they may need to press in order to successfully perform a Parry, Evade, or Cartwheel Dodge, I have mentioned the keys and buttons for different Consoles, such as Xbox and PC.

If you’re playing Sonic Frontiers on an Xbox, here are the following buttons you need to press to perform certain moves;

With that said, I end my “How To Parry In Sonic Frontiers” guide and hope that the majority of the players were able to learn what they needed in order to enjoy the game and defeat enemies!