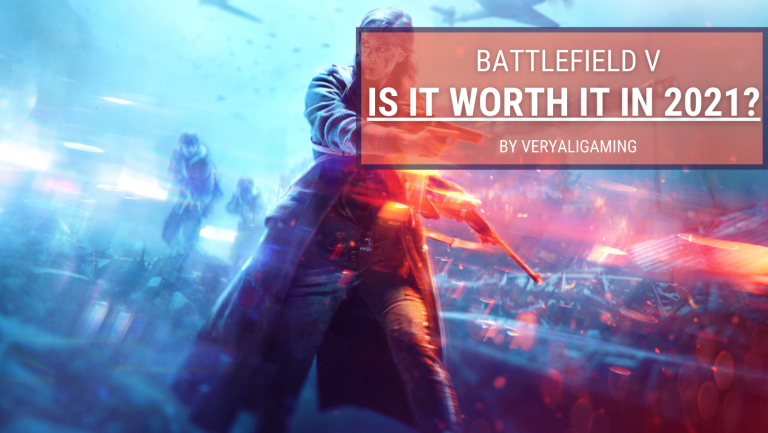 Battlefield V is the latest entry in the franchise. If you are curious to know if it is worth it in 2022, read more to find out.

Fans of the First Person Shooter genre always look forward to playing Battlefield. Released in 2018, Battlefield 5 was met with controversy ever since the trailer dropped. DICE – the studio creating the game, has always prided itself on historical accuracy. Regardless of the controversy, today we will look at is Battlefield 5 worth it in 2022.

Set in the World War II era, Battlefield 5 is an intense game that keeps the player on their toes. From its grueling single-player to its phenomenal multiplayer, it has everything for a fan of FPS games.

If you are wondering if you should check out the game right now, this guide will help you answer that question. Without further ado, let’s start with the article.

Is Battlefield 5 Worth It?

As I mentioned earlier, Battlefield 5 was met with quite a lot of backlash. But that doesn’t necessarily mean that the game is bad. I enjoyed it due to several reasons. Let’s take a look at those reasons now.

The Gun Play is Sublime

Battlefield games have always had a mix of realistic gunplay mixed with an arcade style that bodes well with casual gamers. Battlefield 5 is no different. You have the option to play in various classes – each with its own sets of arsenals, and you can choose between a wide variety of guns. From pistols to SMGs, to Rifles; Battlefield 5 has it all for every type of player. If you are interested in weapons, check out our guide about The Division 2 Weapon Test.

Needless to say, that gunplay is the most important part of any FPS game, and Battlefield 5 nails it completely. In my opinion, the gunplay is probably the best we’ve ever seen from the Battlefield series. I found it to be really responsive and more consistent than its predecessors. The recoil is also balanced and smooth.

Initially, the time to kill an enemy was relatively slow – which caused a further backlash, but DICE soon changed that, and now you can kill the enemy quickly.

Battlefield 5 Active Player Base in 2022

What makes an online game popular? Its player base. Battlefield 5 still has a healthy player base in 2022, making it enjoyable even now. The game has been going strong despite initial controversies and backlash.

Being the newest entry in the series, players are still playing Battlefield 5. You can easily find a full server of players to play with, despite the game mode you wish to play. Whether you want to play conquest, frontline, or breakthrough; you will always find a full server that just adds to the experience. So, I can say with confidence that Battlefield 5 is not dead and still going strong in 2022.

Battlefield 5 features tons of great maps to choose from. You can be fighting in a snowstorm in one match, then you can choose to go to a desert in the next one. There is a ton of variety to pick from. The maps range from large sizes to smaller ones to accommodate people looking for action-packed matches.

While I admit that the maps aren’t the best, we’ve seen in the series, but they definitely do keep the matches interesting.

I was so glad that DICE finally gave us the option to rebuild structures and put up covers anywhere on the map. I agree that blowing up structures is always fun, and that’s one of the primary reasons people love Battlefield, but eventually, you start running out of places to take cover.

Having the option to put up small walls to hide behind was a great idea which I think DICE should further expand upon in the newer games. This keeps the game fresh and makes the gameplay more enjoyable.

Another thing that I appreciate is the way they integrated teamwork into Battlefield 5. The ‘buddy system’ is a great way to ensure squads stick together and take on objectives as a team. It is quite similar to Medal of Honor Warfighter – for any of those who have played that game.

You actually have an incentive to stick with your squad now since you can revive teammates even if you are not a medic. Sharing ammo with squad members is extremely easy now that it makes the gameplay more fluent. You don’t have to stop and pick up random guns just because you ran out of ammo; you can always ask your squad to give you more.

As a long-term fan of the Battlefield games, Battlefield 5 isn’t the strongest entry in the series. While I would choose Battlefield One, Four, or even Three over this one; I still think it’s a brilliant game. This game had a lot of potential that sadly wasn’t utilized correctly, but for me, it is a good foundation for the upcoming Battlefield games. If you haven’t already, then definitely do check out the game since it is a fun time and an overall good experience.