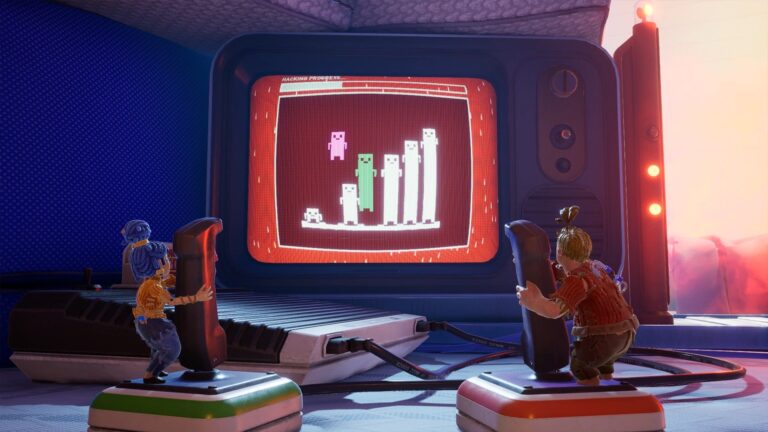 It Takes Two is the latest co-op adventure from the creative minds behind A Way Out, Hazelight Studios.

This time, in centers around a pair of troubled parents, Cody and May. It Takes Two is like The Borrowers, but if the entire movie was playable. The world that Cody and Mel have to traverse isn’t just surprising, but utterly charming, filled with an array of wonderful contraptions and beautifully detailed interiors and exteriors.

On the journey from their shed to their house, Cody and Mel’s adventure is a perfect marriage of gameplay and story. It constantly kept me engaged and entertained along the way.

The heart of It Takes Two’s story centers around the parents of a girl named Rose. The opening shot exposes the cracks that are starting to form within the relationship between her parents, Cody and May.

After a heartbreaking opening scene, Rose is forced to retreat into the comfort of her bedroom, where she is comforted by two dolls she has created. These dolls represent a make-believe version of what she wishes her parents could be. She has also secretly purchased a book titled “Book Of Love” to learn how to make them care for each other again.

Rose’s tears trickle from her cheeks onto the figures and book, conjuring magical powers that sweep through the house. When we next see Cody and May, their souls have been passed to their miniature, wooden, and clay versions of themselves. Let the games begin!

The moment you are thrown into the game, there is no sign of stopping. One moment Cody and May are collaboratively steering a giant pencil around a connect-the-dots picture. The next moment they’re conjuring magic spells and flailing swords as a wizard and barbarian in an isometric dungeon crawl.

Before you have a moment to comprehend what you’re experiencing, they’ll be hopping inside the crystalized interior of a kaleidoscope. Just when you think it must be out of ideas, Cody will be taking control of a tiny plane that he hijacked from a literal army of squirrels. Whilst May goes head-to-head in a Street Fighter-style showdown with a member of the local squirrel militia atop its wings.

It manages to shift seamlessly from one gameplay style to another, each with its own fresh set of mechanics, and almost none of it is ever recycled at any point.

Most importantly, every action feels delightful to perform. The platforming essentials are perfect, with May and Cody’s jump, double-jump, and air-dash abilities being so responsive and allowing for effortless levels of platforming precision. The major highlight is the character’s special abilities that refresh with every chapter.

Early on, Cody will have a belt of nails thrown over his shoulder, whilst Mel lugs around a hammer-head on her back – turning seemingly simple traversal sections into a careful dance of “okay, NOW, GO NOW!” Both me and my couch co-op partner were screaming with laughter when we both inevitably jump too early or too soon.

Additionally, whilst most elements in It Takes Two’s environments serve a specific purpose, there is an overwhelming amount of objects that are interactive simply because they’re fun to kick around and smash with a hammer. The wind-up cars that you can launch into the air and giant balloons you can use as a trampoline are there just because they are – and it is great.

Another major standout in It Takes Two is the voice acting. Cody and Mel’s voice acting is top tier. The strain in both of their voices when they are throwing verbal jabs at each other, such as sarcastic remarks and sly little digs, are very reminiscent of conversations I’d often hear when my dad would forget to take out the rubbish… more than once.

Additionally, the voice acting translates over to every single movement they make, whether it is a grunt after a big landing, breath, or scream, they are executed perfectly and honestly.

The visuals on display are reminiscent of a big-budget Pixar animation – when in motion. The quality of the textures on the doll counterparts of Mel and Cody are exceptional. But the human versions of themselves are ironically a little clay-like and seem slightly unpolished. Fortunately, you rarely see these versions throughout the game, only in the occasional cutscene.

Where the visuals really shine is within It Takes Two’s beautifully crafted environments. With every interior and exterior you visit – whether it is a space-like pillow fort, an underground tree river, or a giant open-sea theme park – each was entirely varied and offered its own character and unique design to fit.

It Takes Two is a spectacular and immensely joyful co-op adventure that lays down a bunch of great gameplay ideas and uses these ideas to outstanding effect. It’s beautiful, fast-paced, and is spewing with creativity and charm. All of which collides to form a perfect marriage of engaging gameplay and a heartwarming story of love. It also reminds you of the teamwork that is required to maintain it.

If you have any form of co-op partner in your life, It Takes Two is definitely a trip that is worth experiencing. Together.

You can pick up your copy here and see for yourself (affiliate link).

Summary: Work together to get home through a series of co-op puzzles in a big, wide world. Only through teamwork will you get back to your daughter and become human again. 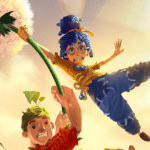