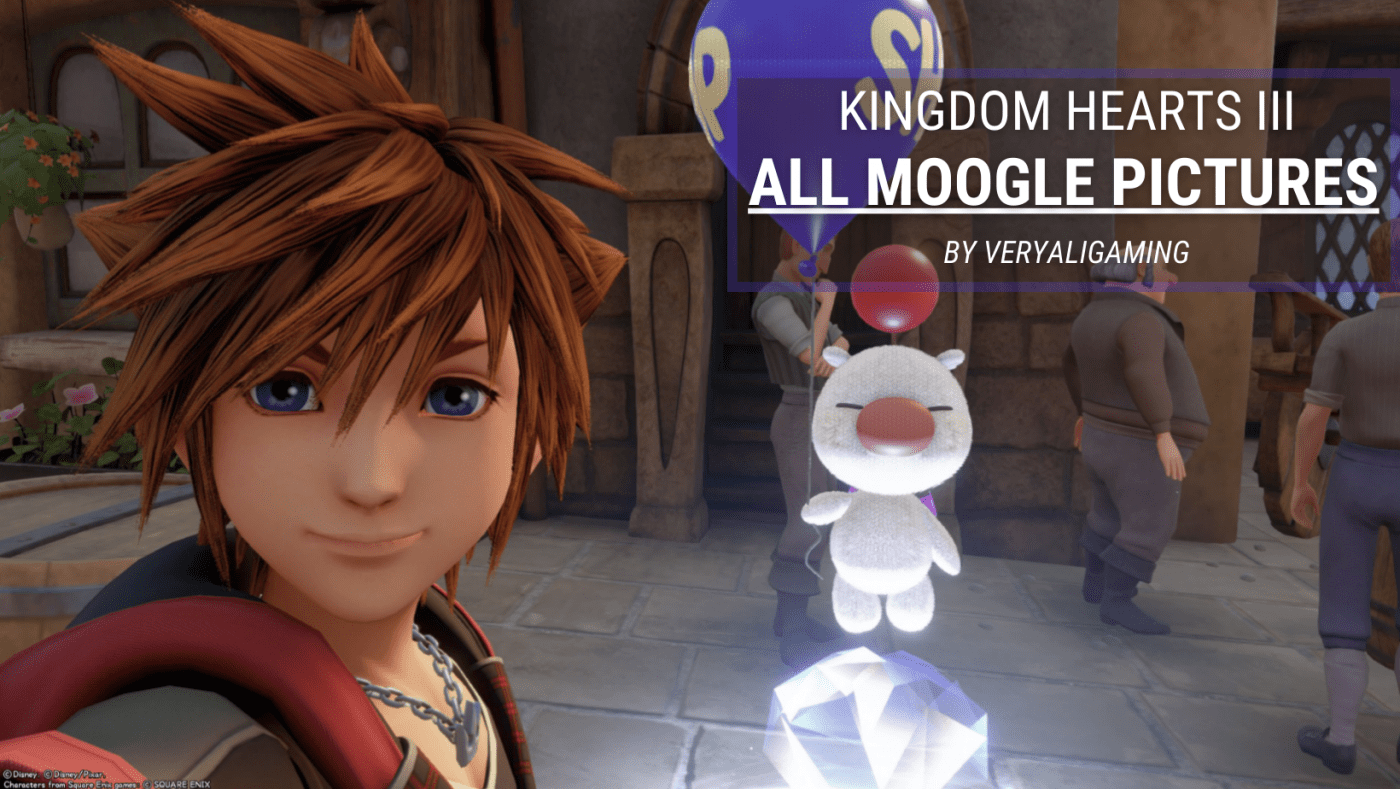 This guide will make it extremely convenient for you to take all of the Moogle Pictures.

As soon as you arrive in Twilight Town, you are given a mission to take pictures for the Moogle. These aren’t ordinary pictures, however; you have to snap some very specific objects. You’ll have to snap 20 pictures in total to complete this mission. Worry not because this guide about KH3 Moogle Pictures will tell you everything you have to know. Meanwhile, check out Ingredients Locations as well.

When you receive the mission, you are given cryptic hints as to what subjects you have to photograph with your Gummiphone. If you’re having trouble, then this guide is perfect for you.

With that said, let’s get started!

I will discuss how to take these pictures in order, so it is easier and more convenient for you. They can be a little time-consuming but taking these pictures is super fun.

The first mission KH3 Moogle Pictures will have you looking for a Flame Core and snap a picture of it. It can be found near the Thebes Overlook in Olympus. You’ll have to go to the save point and head east towards the stairs. Go down, and some Flame Cores will spawn.

I recommend taking a few pictures since the game often does not recognize photos of moving enemies. You will know when you get it right since the game will notify you.

Use the elevator to go up a floor from the basement and run past the first lot of enemies that spawn. As soon as you enter a room with yellow pipes, some Water Cores will spawn. Do the same thing you did before and take a few pictures until the game gives you the go-ahead.

Chief Puffs can be found in the Kingdom of Corona. They are extremely common, and chances are you’ve already run into a lot of them. Start from the Forest Hills save point and keep heading north. Eventually, one Chief Puff will spawn, and you can take a picture of it.

If you do not know how they look like; they have a fluffy head with leaves around them. If you attack them, their head can grow surprisingly long.

This one is quite simple. You can find the Hercules Statue in Thebes Agora, Olympus. This is the first picture you take of an object that isn’t moving around thankfully. You will immediately see the giant statue of Hercules that is being rebuilt. Spawn in Thebes Agora, turn around, and take a picture of the enormous statue.

I found this one quite difficult to find during my first playthrough. I had no idea where to look because I didn’t pay attention to my surroundings in the Toy Box world. When you enter the Galaxy Toys, use the rest area save and head on over to the Action+ store. It is located on the first floor so you won’t have to go far.

Once you are in the store, you will spot a gigantic Mecha figure bursting through one of the walls. Climb on top of the displays and take a picture of the Beasts & Bugs wall. You cannot miss this since it has spotlights shining towards it so don’t worry.

Coming across KH3 Moogle Pictures. in this is fairly simple. It is easily understood by its cryptic description. You must spawn at the Rapunzel’s Tower in the Kingdom of Corona. Just turn around and take a picture of the enormous tower in the forest and you’ll be done.

While you are in the Kingdom of Corona, head on over to the festival taking place in the city. The confusing part for most players is what they have to photograph. Your picture will be valid as long as you take a photo of any part of the festival that shows the celebrations.

I suggest taking a picture when you are standing under the archway with the big doors in the background.

This mission will have you travel all the way back to Olympus. Spawn at the Realm of Gods Corridors and walk up the small stairs in front of you. You will find a water feature that you can grind on to reach the Secluded Forge area. There will be a flaming fire burning in the forge. This is the main subject of your photograph for this mission. You can find it right next to the anvil. All you have to do is photograph it and you’ll be done.

Since we are already in Olympus, let’s head over to the Realm of Gods Apex save point. You can easily spot Zeus standing outside the enormous golden gates. Just take a picture of him and you’re good to go.

This one is quite possibly the most convenient out of the rest. You will find a tram going across town in the Twilight Town world. It is nearly impossible to miss so do not worry about not finding it. Right in the center of town, take a picture of the moving tram to complete this mission.

For this mission, we are going back to Monstropolis. Since CDA Agents can only be found there, this one is quite simple. Use your save point to spawn in the Tank Yard and all the way across the room, you’ll find a hard-working yellow monster standing. Snap a picture of him and you can be on your way for the next one.

I was super excited to take a picture of this because it is one of my favorite places to visit in Kingdom Hearts 3. When you arrive in Arendelle, you must go to where Elsa, Anna, and the rest of the Frozen gang are.

Once you reach the North Mountain Ridge, you will find the majestic ice palace that Elsa created. After basking in its glory, take a picture of it, and let’s get going forward.

This one can be considered as a freebie since you can potentially take a single picture and complete two missions. When you are done with the previous mission, look forward and you’ll find Olaf standing at the foot of the stairs. Take his picture to complete this Moogle mission.

You have to head back to the Toy Box world for this one. Spawn on the top floor of the Galaxy Toys and enter the play place. Once you go behind it, you will see a big green cactus positioned to seem like a person. You might remember this from when you have to assemble it to reach the vents in the story mission. Snap a picture and you’re ready to move on.

For this, you’ll want to go to the 100 Acre Wood. To enter it, you must head to Twilight Town and use the Merlin’s Book outside of the Little Bistro. Once you enter the location, you will find a scarecrow near the crops outside of Rabbit’s house. Take his picture to complete this part of the mission.

If you’re having problems finding the scarecrow, just look at Rabbit’s door from a little distance and you’ll automatically see the scarecrow near it. There is also a giant pumpkin which can make it easier to spot as well.

The Evening Star of San Fransokyo

Once you reach the bustling city of San Fransokyo, you will want to head over to the tall building with blue stripes on it. You can access this place when you spawn at the North District save point and look directly ahead. Climb on top to make this process easier.

One thing you have to keep in mind is that this can only be done during the nighttime since that’s when the star appears. Once it’s night, look directly up at the sky and you will see a lone star shining brightly. Take its picture and head on over to the next one.

While in San Fransokyo, you’ll find a few objects in the sky that are shaped like fish fans. This one can also be done while you are at the big blue cylindrical building used to complete the previous mission.

Look north when you’re on top of the building and you will spot these fans. The catch, however, is to take their picture during the daytime. They have blue decorations around them and are flying constantly so they are hard to miss.

Waterfall in the Caribbean

It’s time to look beyond the horizon and visit the almighty Captain Jack Sparrow. Fast travel to the Fort and leave through the back entrance. You will have to follow the path until you reach a huge waterfall. It is quite difficult to miss since you can clearly see it when you go down the path behind the fort.

When crossing the stone bridge, pull out your Gummiphone and take a picture of this marvelous waterfall.

We are once again heading back to Monstropolis. I noticed while making this guide that there are a lot of pictures to take in that world. Once you are there, go to the Power Plant Tank Yard and walk outside. You will see a pipe that you can grind on; do it and interact with the blue battlegate.

Once you do interact with it, a Demon Tower will spawn. Quickly take its picture and continue the battle to kill it. When you kill the thing, you will also receive a secret report so you are hitting two birds with one stone. Just make sure that none of your teammates are blocking the view since it can be quite a chaotic battle and you do not want to snap a picture that isn’t good enough.

Finally, All of Sora’s Teammates

The final mission has you visiting all of the amazing friends you made on your epic adventure in Kingdom Hearts 3. There is a total of 12 teammates in the main worlds, and you’ll have to take everyone’s pictures.

First, take a picture of Goofy and Donald. You can do this anywhere since they are always with you so it’s not much of a hassle. Then visit Olympus and take a picture of Hercules. After you’re done with that, go to the Toy Box and photograph Buzz Lightyear and Woody.

Finally, head on over to the Caribbean to take a selfie with the legendary Captain Jack Sparrow. The last location you’ll have to visit is San Fransokyo to get a picture of Baymax. With that done, you’ll have completed the entire mission.

This quest can be a little lengthy but if you are committed enough, you’ll make it through it with no problems. You will get various rewards every time you finish a picture mission so it’s all worth it in the end. Plus, it’s tons of fun to do, so you won’t get bored in the middle of it. Check out Subnautica Best Place to Build a Base if you are a fan of the open-world survival game.

With that said, we are at the end of our guide about the KH3 Moogle Pictures. Go on out there and give this a try for yourself. Leave a comment telling me about which picture you had the most fun snapping.