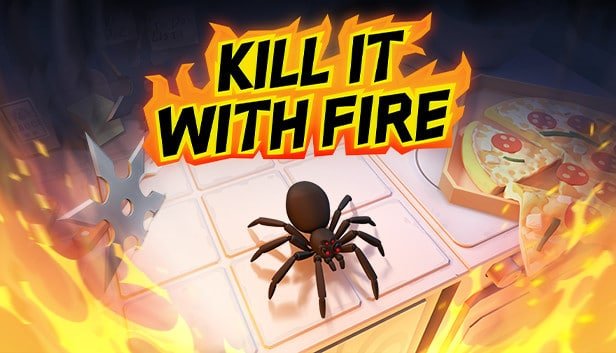 Kill It With Fire Review (PS4)

There are games that come along every so often that have the player complete mundane tasks, then add a healthy helping of wackiness to make it into a modern-day classic. Take games like Surgeon Simulator, Table Manners, or Untitled Goose Game as prime examples of this. Well, it seems we have yet another jovial and silly title that aims to capture our attention through over-the-top action, obnoxious controls, and pure hyperbole. We are of course referring to the new spider assassination epic, Kill It With Fire.

This game takes the simple act of ridding your house of a common spider and then turns the dial for insanity up to eleven. In this title, you’ll have access to a variety of weapons to kill these creepy crawlies, you’ll have a series of over-the-top challenges to clear, and surprisingly, there’s even a touch of narrative weaved in there too. However, is this game just another throwaway Unity game, or does this indie title offer an arachnid killing classic to remember? This is our review of Kill It With Fire on PS4.

Let’s begin with the overall gameplay experience for this title. In terms of how this game handles, the controls are accessible and easy to grasp, meaning you can jump into the action with little hassle. Unlike games like Surgeon Simulator or other Tiny Build game Totally Unreliable Delivery Service, the controls actually feel tight. When handling melee items, you always feel like you can make contact with your targets and equally with guns, projectiles, and the like, each handle very well, meaning that if you have the skills, the spiders don’t stand a chance.

Then with regards to the weapons themselves, there is so much variety. You’ll start off with rather basic tools like a clipboard, a lighter and hairspray combo, or just any inanimate object you find in the immediate vicinity. However, as you progress through the various levels, you’ll gain access to ninja death stars, flamethrowers, assault rifles, bazookas, and much more. One might suggest that it’s overkill. We say it’s a hell of a lot of fun.

Then moving onto the level designs and how much the player has to do. The various areas that the players will navigate killing mercilessly are rather unremarkable in nature. You’ll start off in suburban houses or local newsagents. Then by the end, you’ll visit a secret lair of an underground organization. Yet despite this intrigue, all the areas feel adequate, nothing more. They are a means to an end, they do just enough to keep the game fresh and really, it’s the fun combat mechanics that carry players through, not the bare-bones story, the audio, and certainly not the visuals.

Then with regards to the content, there actually is a surprising amount to do in Kill it with Fire. For all the completionists out there, you’ll have to collect all the upgrades, weapons, and batteries in each stage. You’ll have to check off all the tasks for each level. Then to round it all off, you’ll have to complete the Arachno-Gauntlet challenges. Which are essentially tasks that will really test your proficiency in killing spiders in very specific ways. Admittedly, you’ll still be able to blast through all this content in a handful of hours, but that is to expected of games of this nature.

No Stranger to Bugs

It’s ironic that a game that’s content revolves around the concept of killing bugs wouldn’t eradicate the ones within the game that weren’t intended. Due to the ‘my first unity game’ feel that the title exudes, you come to expect some issues along the way. Weird glitches are part and parcel of these games and in a lot of cases, add to the fun. We need only look at Goat Simulator as an example of that. However, some issues really hinder your progress overall.

Lifting smaller objects can sometimes lead to the player missing the desired target, only to launch the object across the room, never to be found again. Objects can glitch through walls, leaving them out of reach altogether. Plus, while we are being critical, the game fails to provide explanations in some areas. A key example being when you reach the end level. The player will likely wander around aimlessly, trying to clear the tasks on their clipboard. However, what the game doesn’t tell you, is that you have to clear every Arachno-Gauntlet challenge to begin the end-level festivities. Something the game never tells the player.

Trapped in the Bath

Then lastly, we took at the game’s overall presentation. In terms of visual quality and the animations on show, they are nothing work marveling at. The textures are far from detailed, the models are rendered just well enough to be recognizable. Then with regards to the animations and effects, again, these are very underwhelming.

The sound quality is hardly much better. You’ll have a different tune for each stage which is appreciated. However, it feels like royalty-free filler content. I’ll admit that I didn’t expect an awful lot from the title and in the end, I got exactly what I predicted in this department.

Overall, Kill It With Fire is ultimately a rather fun and short-lived romp. However, it isn’t one that will live long in the memory. It’s one of your typical disposable gaming experiences which is a fun novelty to kill some time (and spiders) but as a whole, lacks substance. The game doesn’t charge a huge price for admission, it offers a great deal of content and in terms of raw, unadulterated fun, it has plenty. If you want a game with detail, narrative, or depth, this won’t be for you. However, if you want to frantically chase spiders and maniacally attack them with a wide variety of weapons and objects, then this is the game that will make all your fantasies a reality.

So that’s our review of Kill It With Fire. What do you make of our review? Do you think this game is a lesson in indie game development done right? Or do you think that this is a disposable gaming experience epitomized? Let us know in the comments below. Plus, if you liked this, you may like our review of Taxi Chaos. Or alternatively, check out our news about the success of Doom: Eternal. Thank you for reading VeryAli Gaming.

Summary: Kill It With Fire is a first-person action game about hunting spiders and causing collateral damage. 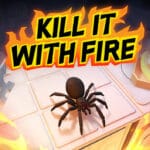