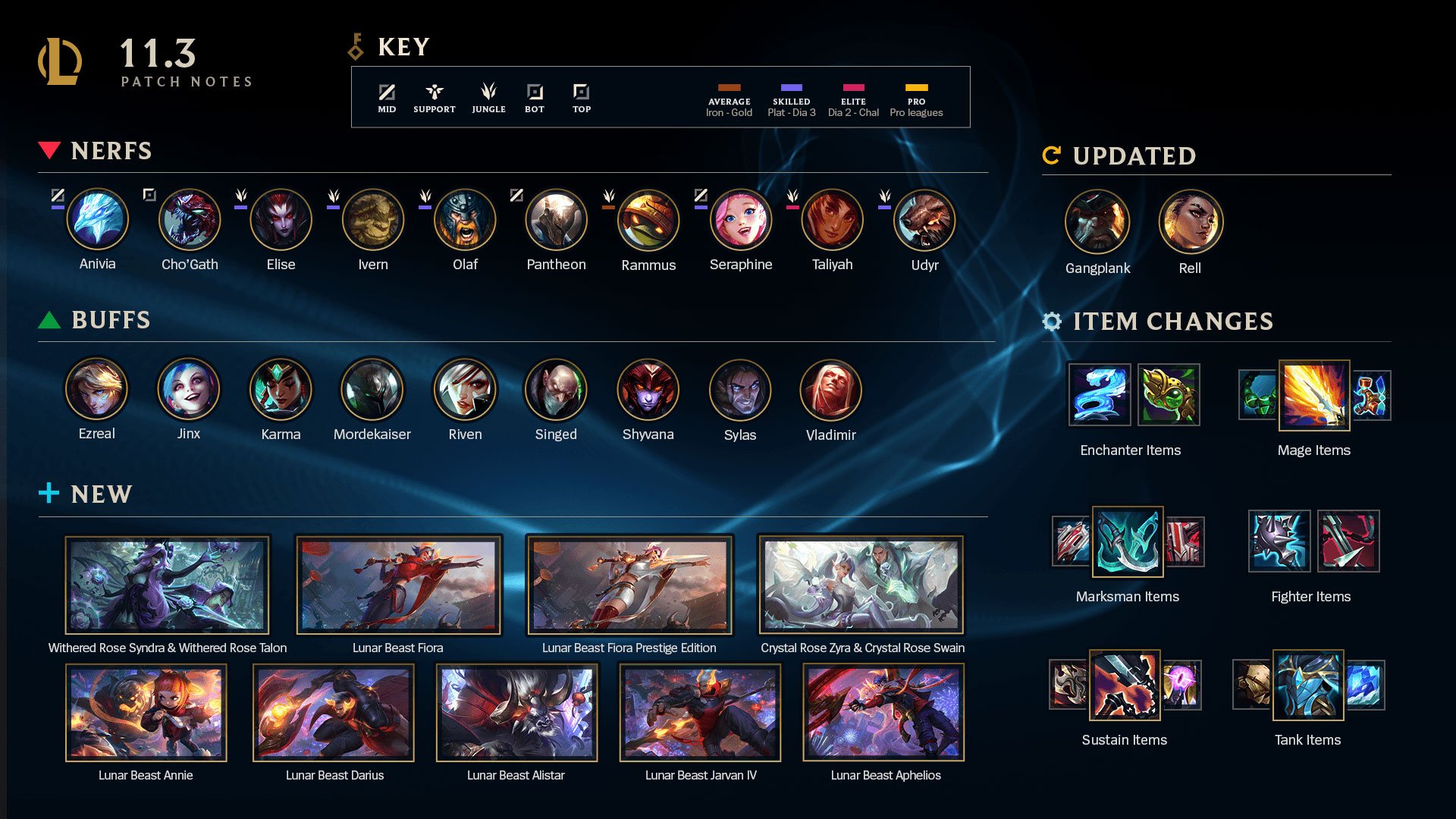 League of Legends Patch 11.3 – What to Expect

Riot Games dropped the League of Legends Patch 11.3 notes! You can find the full patch here. In this article, I’ll be giving a rundown of the changes as they impact a general solo queue player. Riot puts these people in their Average (Iron-Gold) or Skilled (Platinum – Diamond 3) tiers. Most players reside in one of these tiers, and the nerfs presented in patches are targeted at specific tiers. Without further ado, let’s see how Patch 11.3 will change solo queue!

The first champion we’re seeing get hit is Cho’Gath, and it’s just a little toning back. The flat damage on his Vorpal Spikes (E) is getting hit at higher ranks. This likely won’t hurt his viability, just make him less oppressive in trades when maxing E.

The Pantheon nerfs are documented as mid lane, but this guy gets around the map. We’ll go over them here! His Comet Spear (Q) damage reduced against monsters with a longer cooldown at early ranks. This should hurt his early game sufficiently.

Mordekaiser is getting buffed. Death’s Grasp’s (E) cooldown is now 2 seconds faster at every rank. This paired with a few item buffs may see Mordekaiser climbing in pick rate.

Riot likes Es and 2 second cooldown buffs this patch! Riven’s E, Valor, also received the same changes. Two seconds at every rank makes Riven much more survivable and mobile. This probably won’t make her immensely viable for people outside of her dedicated playerbase.

Everyone’s favorite chemist is getting a buff. Singed’s Poison Trail (Q) will have a 90% ability power ratio, a 10% increase.

Elise is getting hit with a nerf to her damage and her clearing safety. Her human Q, Neurotoxin’s flat damage is down at later ranks. Skittering Frenzy (spider W) is having its active attack speed only scale by 10% when leveled, down from 20%.

Tree down! Ivren’s health scaling is down, making him squishier later into the game. The shield on Triggerseed (E) also got hit. If you value the support jungle role, these changes shouldn’t impact the tree too hard, but keep in mind you will need to play safer.

Whatever Rammus does to taunt people, he can only do once every 12 seconds at every rank now. This is up from 10 at max rank previously.

Taliyah’s passive got its previous nerfs reverted. To rein her in for the jungle, her Q (Threaded Volley) now does 80% less damage to monsters on subsequent hits.

Udyr (a hotly contested pick in the Lock In tournament) is seeing blows to Phoenix Stance (R). The aura damage on activation is down 25 damage at max rank.

Shyvana is getting some new AP tools! Her Q, Twin Bite, and W, Burnout, are both receiving AP scaling to help her clear. Hopefully this also makes her less centered around spamming dragon fireballs.

Anivia is due for some nerfs after the Flash Frost (Q) missile speed changes. The detonation damage scales worse and has lower base damage at all ranks. The cooldown on her R, Glacial Storm, is up at later ranks. This should make her less of a menace all around.

League’s pop princess Seraphine is getting turned down. Her notes are doing less damage overall. The shield from Surround Sound (W) is also dropping. We’re going to see less of her overall with these nerfs in tandem with less AP on Staff of Flowing Water. 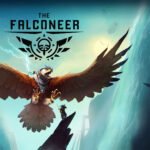 Sylas can throw his chains around more, as Chain Lash (Q) will cost a flat 55 mana at all ranks. Kingslayer (W) is getting more damage and scaling on it.

Vladimir is getting a bloody big buff to his ult. The cooldown is down to 120 seconds at every rank instead of just rank 3.

No nerfs here outside of Seraphine and Pantheon changes, as they both can be flexed into the bottom lane.

Ezreal’s changes are short and sweet. Mystic Shot (Q) is getting a 10% AD ratio buff!

Jinx’s buffs are a fir bit longer, but just as sweet if not sweeter. Fishbones’ (that’s the rocket launcher) range is up 25 at all ranks. Its attack speed penalty is down to 10% from 25%. Flame Chompers! (E) has its mana cost up to 90, but the arming time down to .5 seconds. As a trade off, Jinx’s base health is down.

Karma’s mana regen is up, and the cost of her Q, Inner Flame is down. This is a recipe for a lot more poke in lane.

You can get League Of Legends Gift Cards [Online Game Code] here.

What are you looking forward to this coming patch? Let us know! Also be sure to check out some of our other articles: BlizzConline 2021 is Going Live for Free on Feb 19-20, Here Are All the Details and Live-Action Zelda and Star Fox Shows Cancelled Due to Netflix Leaks. 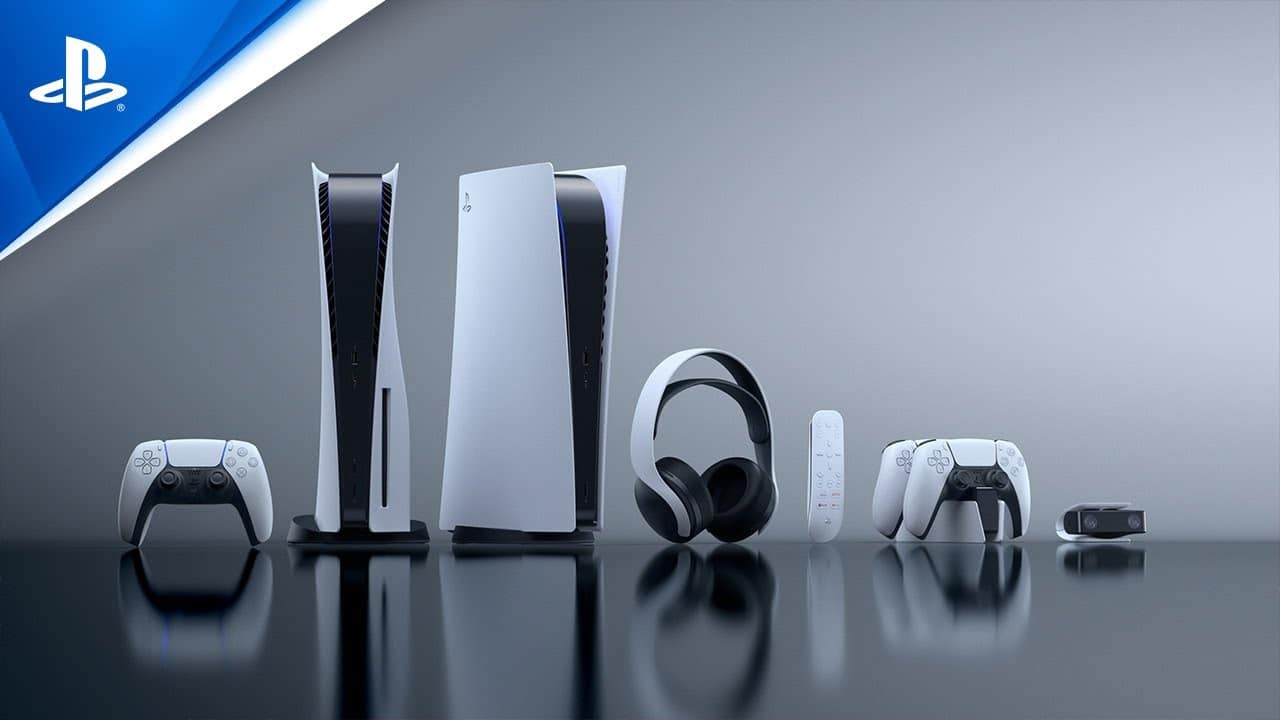 PS5 Is Officially The Fastest-Selling Console In US History
wpDiscuz
0
0
Would love your thoughts, please comment.x
()
x
| Reply