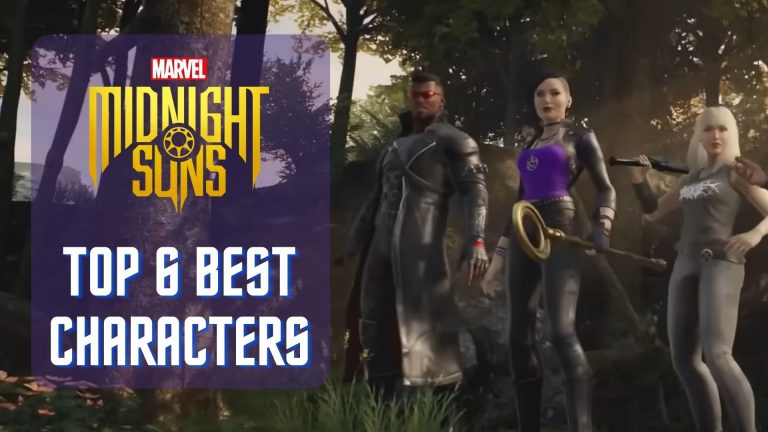 Here's all you need to know about the top 6 heroes in Marvel Midnight Suns.

One of the best heroes in Marvel Midnight Suns is Spider-Man due to his mobility and controlling ability. Captain Marvel is a great choice as well as she can easily tank down tons of enemies in an instant.

Spider-Man is one of the most powerful characters in Marvel Midnight Suns, mainly due to his flexibility. Instead of dealing raw damage, he swings from one place to another with his incredible spiderwebs.

This character uses the environment to attack. He uses objects in his surroundings like barrels and crates to deal damage to his enemies. It improves your area coverage and lets you take down multiple enemies in a single blow.

Be careful, though, as Spider-Man does not deal a lot of damage when compared to other characters. Hence, using Strengthening cards on him will benefit you a lot.

Spider-Man has a powerful Specialty that has great facility in battle. Its name is “Distributed Damage” and, as the name suggests, it spreads your damage. This makes a huge difference in the game as it allows you to distribute your damage without using multiple cards.

The way Spider-Man does this is through his webs. And that’s not all. His webs can also bind enemies together. Additionally, he can use the environment around him to hurl barrels, crates, and even entire generators. He can do this without using up any of his Heroism.

Moreover, Spider-Man can use his webs to pull enemies closer, which puts your enemies in quite a sticky situation.

Passive: Bring The House Down

You can also unlock a Passive ability on Spider-Man called “Bring The House Down“. This ability grants you a 15% chance of refinding Heroism whenever Spider-Man uses an environment attack. This means that, if you play him right, you can trigger this Passive at least once during each battle.

Additionally, on upgrading the Passive, you get a free first environment attack every encounter.

Captain Marvel is a powerhouse in the arena when it comes to raw damage and control. She has both blocking and healing skills as well as damage-boosting cards that totally throw off your opponent.

She is both an offensive and a defensive hero. Under normal circumstances, she’s a defensive tank, standing steadfast against enemies. But when she goes Binary, she deals massive amounts of damage that no other hero can.

Carol Dancers is perfect for the frontlines, considering she has great sustain, especially when her Passive is active. Additionally, her Passive makes her a great damage dealer. Hence, she’s one of the very few characters in the game that’s both offensive and defensive.

Captain Marvel has two passives, making her a highly efficient player on the battlefield. Her first Passive is Binary and it lets you generate a free Go Binary card after playing 3 cards.

Her other Passive is “Didn’t Feel A Thing”. It grants her a 10% chance of gaining 1 Counter on each KO. Counter means that damage is dealt to the enemy on their turn. There is a limit of 1 Counter per turn.

You can unlock her Passive as well as more of her abilities by increasing your friendship with her. If you want to know more about improving friendship with a character, then check out our Midnight Suns friendship guide.

Magik is a highly controlling hero in Marvel Midnight Suns. Her Specialty involves creating portals and teleporting both enemies and allies. She has great synergy with Spider-Man, Ghost Rider, and even Scarlet Witch.

Magik’s Specialty allows her to take full control of the battlefield by generating portals around the arena. Her allies can use these to relocate with ease behind enemies.

Every time Magik knocks back an enemy and pushes them through a portal, she has a 10% chance to generate a Limbo Portal card. This chance increases to 25% when you upgrade the passive.

If you want to expand your horizons and make the most out of a single character, then you should opt for the Hunter. Reared by the Caretaker as the perfect weapon against Lilith, she has mastered many skills over the years.

That’s why you can play her on virtually all fronts. She has great controlling skills packed with damage and flexibility. Hence, she synergizes with many heroes and is one of the best Marvel Midnight Suns characters.

Hunter is an extremely versatile hero that you can use in many positions in the arena. You can customize her with skills and abilities that can range from crowd control to support and even just raw power.

To be clear, the Hunter has three branches: Power, Dark, and Light. Power abilities deal damage while also lending some defensive capabilities.

Dark abilities focus more on damage while compromising on cards and health. Lastly, Light abilities generate Heroism and heal your other heroes.

The Hunter has two Passives: Suits and Collars. Firstly, let’s talk about Collars. Collars lend you more abilities every time you play cards from specific branches (only Light or Dark).

Meanwhile, Suits unlocks new abilities every time you unlock a new combat suit. These abilities stay unlocked regardless of whether you’re wearing the suit in battle or not.

Doctor Strange plays a support role in this game. However, that doesn’t mean that he isn’t top-tier. His special abilities and cards allow you to enhance your allies and give boosts to everyone on the battlefield. He has healing as well as Resist and Cure abilities.

And that’s not all. He is mainly concerned with generating Heroism passively through his special Passive skill. This grants you a major buff on the battlefield when you can use Heroic cards more often.

Stephen Strange is one of the best support characters in Marvel Midnight Suns. His role is to ensure that his squad has all the support they need in a team fight.

His main focus is on “rewinding” Ability plays, allowing his teammates to reuse abilities that were spent before. Additionally, he grants extra damage to allies while also helping them on the defensive side.

If you want more damage, then Ghost Rider is an extremely powerful character in Marvel Midnight Suns. His main focus is on dealing extraordinary amounts of damage. His special abilities rely heavily on KO’ing enemies and building up Heroism. This isn’t a character that you want to keep on the sidelines.

Since he benefits a lot from his Heroic abilities, he is best paired with characters that generate Heroism such as Doctor Strange. He should be your first line of offense. Ghost Rider has great AoE (Area of Effect) skills as well as chaining skills.

Robby Reyes is one of those Marvel Midnight Suns characters that is pure damage. He deals more damage than other characters and is the definition of raw power. However, his abilities do come at a price, which is often paid by his allies and himself. But that shouldn’t stop you from using Ghost Rider at its full potential, as he is also capable of regenerating HP.

Ghost Rider features a unique passive that includes what is known as a Souls Meter. Each time you KO an enemy, the Souls Meter starts filling up. Once filled up, it will generate a Soul Drain card. This is a Heroic card that grants 2 Chains (it will chain up to 2 enemies or the same enemy twice) along with some Lifesteal.

And that’s not all. Soul Drain has a stacking capacity where every time you use Soul Drain, the next Soul Drain gets +1 Chain. However, it also costs 1 more Heroism.

Marvel Midnight Suns certainly has a diverse roster of heroes that, with time, will only expand. Right now, even with the 12 heroes that are currently available, you have numerous options at your disposal.

To recap, the best Marvel Midnight Suns characters include Spider-Man, Captain Marvel, and Magik. These have great synergy with each other.

Additionally, you can always go for Doctor Strange and Hunter if you want more damage and support. Lastly, you can go for Ghost Rider since he deals raw damage that’s unparalleled.