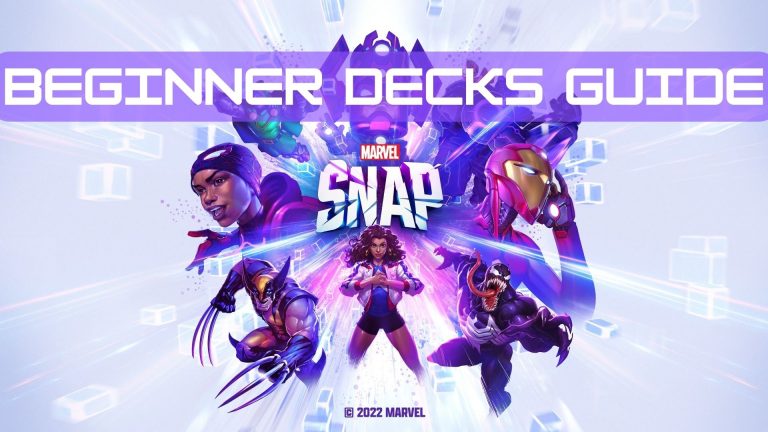 Get a super-powered start in Marvel Snap with our in-depth deck guide.

You’ll begin playing Marvel Snap with a simple hand of cards featuring well-known figures like Iron Man, the Hulk, and Star-Lord. Despite the fact that you’ll still see them occasionally even after playing hundreds of games, they aren’t considered to make an unbeatable deck.

It goes without saying that successful tactics won’t rely on certain cards, but rather on how your deck as a whole synergizes with itself. One benefit of using smaller decks and playing shorter games is that you can experiment right away without investing hours in testing.

Because the whole card library has been divided into ‘pools‘ that become accessible when your Collection Level rises gradually, players aren’t instantly introduced to more intricate card dynamics. You’ll join Pool One after the tutorial, then on to Pool Two (level 222), and eventually Pool Three (level 486).

There are a few solid and consistent decks you can build from the first two Pools in Marvel Snap, as listed below:

These are by far the most consistent decks from Pools 1 and 2, they’re easy to work with, and will allow you to familiarize yourself with various card and location effects as you progress through the game.

Let’s tell you about these beginner decks in marvel snap in more detail now, starting with Ka-Zoo.

Here are the cards you’ll need for this deck:

Around collection log level 100 you should be able to build a Kazar Zoo deck. He has an Ongoing ability your 1-Cost cards have +1 Power.

This deck list focuses on a lot of one-cost cards. This does a lot of good things for you, and it allows you to not be draw-reliant, so you can play any of these cards in any order. Angela is a card you always want to drop on an empty lane, as she gains +2 power for each card you drop in that lane afterward. She synergizes well with Nightcrawler, who can buff her up before you move him into another lane that may need more power.

Next is Bishop, who will continue growing and gaining power with every single card you drop after putting him onto the board. If you put him on the board, and then you end up dropping three or four of your one-cost cards, after that he’s going to continue to get stronger with each card that is played.

You also have Iron Man as a method to double your power at any of the 3 locations. Your opponent is probably not going to have cards like Enchantress or Killmonger early on while you’re in pool 1, so you don’t really have to worry about your ongoing cards getting canceled or your one-cost cards getting destroyed.

America Chavez serves as a deck thinner here, as you’ll only draw her on turn six, giving you a chance to draw Kazar, Blue Marvel, and Onslaught a bit earlier. If you miss out on any of those combo pieces, Chavez still serves as a really solid final turn play with nine powers.

The discard archetype may also be played as a budget deck early on in Marvel Snap. The strong Apocalypse, who returns to your hand with +4 power each time you discard him, is one of the many cards in this deck that you should discard. Here are the cards you’ll need for this deck:

Lady Sif, Blade, and Sword Master are your primary discards in this situation. Lady Sif becomes a fantastic combo partner for Apocalypse since she always discards the card with the greatest cost in your hand. It is recommended to hold off using Blade and Sword Master until you have cards like Wolverine and Apocalypse in hand since they will randomly discard a card.

While you wait to draw into your other cards, you can get support from the other cards. Angela will provide you a significant power boost even if you don’t grab Apocalypse early, and 1-drops will still be effective and reliable here.

The cards you’ll need for the next Beginner Decks in Marvel Snap are:

The Spectrum’s ability on reveal gives your ongoing cards +2 power. If you are building a deck using Spectrum, whenever you first get this Mission. You likely won’t have a lot of ongoing cards, but you should have all of these cards and they should give you enough of kind of a range to be able to complete your mission and continue progressing your card unlocks, your collection log level, and get you in a comfortable place so that you can get into your deeper cards.

When using this deck, it’s crucial to have Namor (who can win you a location by himself), Iron Man, and Klaw in order to have a reasonable chance of having any power in the late game. Iron Man in particular is quite powerful and increases the power of any place he is in two-fold, making him a fantastic addition to a game. Now that Namor has secured one place for you, all you need to do is take control of a second one. It’s a safe assumption that either Iron Man or Mister Fantastic/Klaw, who both boost the power of several locations, can take care of the second location for you.

For this deck, the cards you’ll be needing are:

Odin is a powerful card since on-reveal, he will activate the On Reveal abilities of your other cards at that location again(or, if these cards are on the Kamar-Taj location, where reveal abilities activate twice, a third and fourth time). You should include as many very potent on-reveal abilities in your deck as you can with this card. This will cause Odin to retrigger its on-reveal powers every time you dump him at the very end of the game, allowing you to maximize their potential.

A flawless hand ought to be capable of playing Nightcrawler into Mister Sinister, who divides into two and then equipping Ironheart to buff all three of your characters. You have two options on your fifth turn: White Tiger, which increases the stats on your field, or Spider Woman, which weakens your opponents. Odin should provide you with enough value when played along with at least two of your other “On Reveal” cards to win the game.

Here’s what you’ll need for the next beginner’s deck in marvel snap:

The essential move here is to have as many cards in your hand as you can, then to drop Devil Dino on turn five for a major power boost. With cards like Iron Man and Onslaught, winning another lane shouldn’t be too tough. Devil Dino frequently wins a lane on its own, allowing you to focus the rest of your cards on winning another lane.

The remainder of your cards are designed to strengthen Devil Dino and provide you with info. Mantis, Cable, and White Queen have the ability to take cards from your opponent’s deck and give you duplicates of them, giving you some idea of what they are playing and allowing you to play accordingly. Sentinel aids in completing your curve while maintaining a full hand, which is what gives Devil Dino its strength.

The cards used in this beginner deck are:

Along with a few cards that destroy items on the field, this deck has other cards that get stronger when they are destroyed. You’ll be continually putting cards on the field, destroying them, and then putting the enhanced versions back on the field if you do this. The last card is Death, whose energy cost decreases as you eliminate more cards. As a result, the faster you eliminate cards, the sooner Death with her incredible 12 strength may be placed on the field.

The cards you’ll need to complete this Beginner Decks in Marvel Snap are:

With an ability that decreases the energy point cost of cards in your hand, Sera is one of the most powerful cards in the current Marvel Snap lineup. Combining this with Zero, a card that effectively acts as a bear trap by negating the next effect played, may put you in control of the board very fast. You may easily defeat opponents if you add Taskmaster to your team so that he can take advantage of strong summons.

The cards you’ll need for this deck are:

Any card without a special effect gets +2 strength when the Patriot is played. Naturally, this deck combines Patriot with a number of these cards, including Wasp and Shocker, to make them far more potent. Additionally, Kazar will increase the power of 1-cost cards like Misty Knight and Squirrel Girl, and if you deploy Onslaught, he will double both of these effects.

The superhero-infused tactical card-battler, Marvel Snap, is packed full of your favorite characters taken from the comic pages, and placed into your deck. This game is an absolute delight for marvel fans as it contains a colossal amount of heroes diehard fans or even new ones are familiar with. Make an iconic faction, or even a deck, by assembling all your favorite superheroes or villains.

In this game, you must toss your superhero cards at three different spots. In Marvel Snap, you may experiment with a number of different decks using various Superheroes. So, if you’re wondering which cards, you can give place to in your deck to take into battle, this Marvel Snap Best Beginner Decks guide is for you.

There you have it, our picks for beginner decks. Hope this guide proved useful for you. Check out more of our guides since you’re here. Marvel Snap is out for PC via Steam, Google Play Store, and App Store for IOS