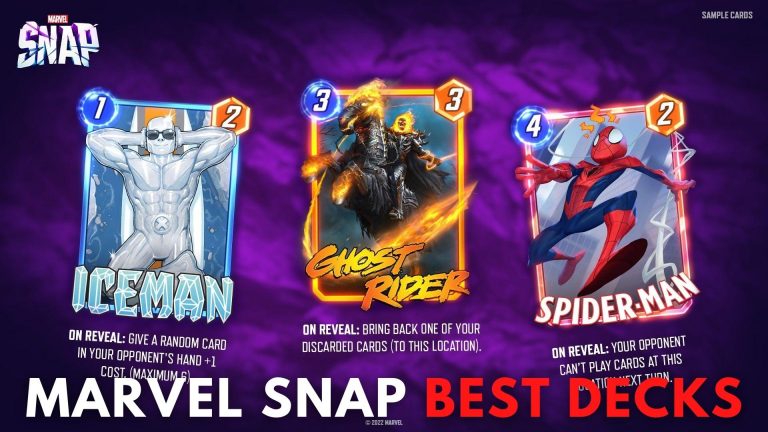 Are you also obsessed with Marvel Snap? the absolute madness of a card-battling game. Then you must be really keen on grabbing your hands on the best decks in the game; well you’re in the right place for it!

So now, let’s move on to freeing you from your curiosity about which decks works best in the game; here we will be enlisting so far The Best Decks in Marvel Snap that you can add to your collection.

This deck makes you deceive your opponent into confusing him about the real motive of your cards while you will know exactly what you’re going with the cards in this deck. If you plan this right, the opponent will have no idea what crossed him.

A good way to use this deck is to activate the movement buffers like Vulture and Dagger with Doctor Strange, and this will allow you to have a fatal combination. Once you’ve given the game a certain amount of hours, you’ll be able to win all the challenges that come your way.

The best strategy to win with this deck is to get your hands on the Kraven combo by putting 3 cards on the line. You can absolutely destroy the opponent’s game plan if you put Kraven next to Heimdall, he won’t even see it coming.

As we talked about this before, the main goal with deck is to play with deception. So use this in the right location.

Ant-man really stands out in this deck as he gives a +4 point boost which can really help you win at certain locations. That is why we are going to use Ant-man to set the strategy for this deck and thanks to the aggressive playstyle of the game.

We can win without taking too long in the game. Iron-man is quite a strong card in this deck as its raw power is enough to finish the opponent while it also doubles the score in whichever location it’s played.

As we said before, Ant-Man is your main player for this game as he can make you win faster and is also not heavy on cost as its cost is just 1. Dominate your opponent by playing with this card with three other cards, and you’ll win faster.

Another Strategy is to use Iron Man to make sure your overall power is increased, and you can wreck the opponent. A win is guaranteed for you if you use this strategy to play the game. Medusa and Punisher can also be used to get to America Chavez, which is the most costly card in the deck.

The name says it all! With Sandman in this deck, we get a hell of an advantage in early turns in the game. Marvel snap has a very easy-to-learn experience, and you can get used to this deck pretty early on. Ebony Maw really changes the game since its power is +7.

Again at the end of the turn you can use ironman to double the power and secure the win with this deck.

The name suggests Sandman to be the main player, but that doesn’t always have to be the case, as Ebony Maw is also a card of great importance in this deck. Because with Ebony Maw, you only need two more cards from the deck, and you can have 27 Power numbers right in your hands.

Other locations are already taken care of, as you have Iron Man and America Chavez for increasing your power.

It wouldn’t be an overstatement if someone said that this is the best deck in the game at the present moment. This card deck is about taking the game to the next level as with it, you can combine all the low-cost cards with Sera, and with her ability, you can conquer the board at turn 6.

The most powerful deck in the game is at its full power at turn 6, so we are going to use that to our advantage. Sera, as the main show of this deck, will be played on a particular location to make that area up to +20 or more if you pair it with 3 more cards.

Don’t forget to put Okoye and Nakia beside each other, as they work well in a combination. The rest is easy to think about, and the game is in your hands. The Third location will be dominated as you have Ant-man in the deck.

All the information that you could have needed about some of the best decks in Marvel Snap is here in this article, and you can use this information to your advantage. It’s a very fun game to play but requires a lot of strategies to win games.

If you liked this article and want us to keep making more exciting guides for you, then follow us for more news related to upcoming games, and share our work in your circle, as it helps us a lot. We’ll see you in the next one very soon.

Do check out: The Best Ways To Get Cards In Marvel Snap