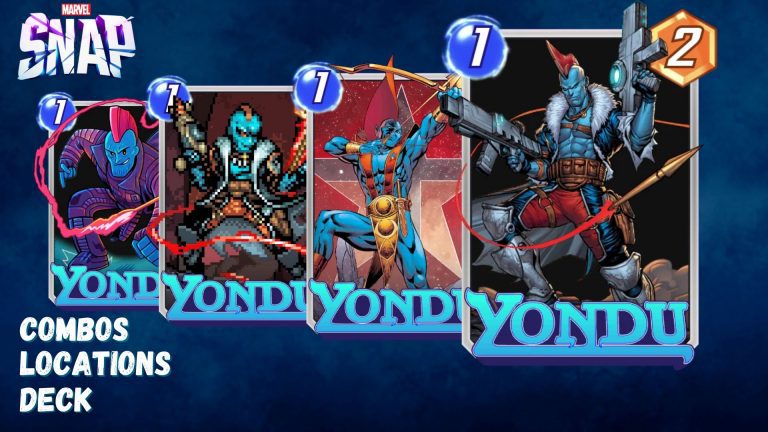 This guide goes in details about what Marvel Snap Yondu character card does and how to reach its full potential.
Asad Manzoor·October 27, 2022·9 min read

Among many other cards, Yondu in Marvel Snap is not a top pick. Due to multiple misconceptions of the card being useless, players avoid picking Yondu for decks, unaware that Yondu is used for milling and performs amazingly if combined with other such cards.

Yondu is a Pool 1 card and can be obtained pretty early on. The card gives 2-Power with 1-Cost, and the ability to remove the opponent’s top card in the deck. Continue reading to learn more about Yondu and how to reach its full potential.

There are currently three types of variant cards of Yondu:

How To Obtain Yondu In Marvel Snap

Collection Level helps players earn not just Credits and Boosters, it also provides a mystery card frequently. Credits and Boosters are used to upgrade existing cards, which leads to collecting new cards. Due to the mentioned reason, always upgrade your cards when possible. It won’t be long to obtain a Yondu card then.

Another way of gaining variants is by earning season pass points and collecting rewards. Some of these rewards include variants. And no, you don’t need to purchase Season Pass, you can collect some variants in the free version too.

Is Yondu Useless Or Not

A common misconception, especially among new players is that Yondu is a useless 1-Cost card, but we beg to differ. We have some strong arguments as to why Yondu in Marvel Snap is not a useless card. These arguments are:

Yondu counters a strong 6-Cost card that only draws on the last turn, giving a player space in hand for early cards. Since America Chavez stays in deck till the end game, the chances of Yondu destroying it are huge. Most of the time, Yondu destroys America Chavez, if the opponent has one in their deck. This can be a major setback for your enemy.

Gets Rid Of Opponent’s Combos

At higher levels, players only bring combo cards to secure easy wins. Yondu can destroy their combo card and fail the opponent’s strategy. Dino, Moongirl, The Collector, and Nova are some of the cards used in combos and mostly every player in high level has them in decks. Just another reason why having Yondu in your deck is beneficial.

A tiny tip for players, avoid playing Yondu alongside Korg. The favors can hugely turn against you. Korg shuffles a Rock into the Opponent’s deck. If you use Yondu after Korg, there are more chances of the Rock getting destroyed which you sent there for your advantage. You make things easy for the opponent this way. If you put Yondu in use in such a way, then Yondu will indeed be useless and nothing more.

Yondu might not be in the top 3 list of Cost-1 cards, but the mentioned combos do make it extremely strong. The following combos double the on-reveal ability of Yondu. Let’s get into it further and learn more about each combo:

Both Yondu and Cable discard the opponent of their card. If played together, the opponent’s deck becomes short by 2 cards. The combo is even better if the location doubles up on-reveal abilities. A player short of cards might retreat, hence making Yondu and Cable a strong combo to break your opponent’s confidence.

Playing Mantis performs the same function as Cable, but only if an opponent plays the card in that same location too. That’s why Mantis costs 1 while Cable costs 2. The lack of confirmation might be a disadvantage but the cheap cost makes up for it.

Playing Uato the Watcher in the first turn reveals the hidden two locations for you. If you may wonder how is that an advantage, well, if one of the two locations is Cloning Vats or Kamar-Taj, you can use Yondu at that location next turn and discard 2 cards from your enemy.

Yondu effect can work twice if you place him at the correct location. There are multiple locations that can do the deed, let’s find out:

Ability: On Reveal effects happen twice at this location.

If you happen to stumble upon the Kamar-Taj location, use Yondu here. Yondu’s On Reveal ability will occur twice and the opponent will lose two decks in one go.

Ability: When you play a card here, add a copy to your hand.

Placing a card at Cloning Vats gives off the same card’s copy in your hand again. Upon placing Yondu, you get another copy of it which you can use later in the game.

Ability: When you play a card here, return it to your hand.

Players have been taking advantage of Luke’s Bar to annoy enemies. Yondu is an amazing card to play at Luke’s Bar location.  Each card played here goes back into your hand after its effect. You can constantly discard cards from your opponent’s hand till they run out of cards.

Ability: When you play a card here, add a copy to another location.

Sinister London is the same as Kamar-Taj, just space-consuming. But for Yondu, 2 opponent cards discarded in one turn only is a huge step towards victory. As long as you play smart, space does not matter.

No, not all locations provide benefits for placing Yondu on them. Some places are absolutely horrible for Yondu and should be avoided completely. These terrible locations for Yondu are:

Ability: On Reveal effects do not happen at this location.

What’s the purpose of placing Yondu here when the location will nullify Yondu’s abilities? Knowhere is the exact opposite of Kamar-Taj. Any On Reveal card, including Yondu obviously, should not be played at Knowhere.

Playing Yondu at Oscorp Tower will give an advantage to your opponent too. After 3 turns, all your cards will swap at the opponent’s location with all the abilities taking place again. Better to avoid Oscorp Tower, at least for the first 3 turns.

Having Uatu the Watcher is necessary for this reason, you can reveal unrevealed locations and know which places to draw at.

Ability: Only one card can be here for each player.

Yondu is low-cost, meaning low-powered too, with just 2-Power in total. Placing Yondu at The Space Throne will waste a whole location for you if the opponent plays a high-power card, which is very likely to happen.

There is one deck we recommend to every player if they want to play with Yondu. We’ve seen many professional players use it and have tried it ourselves, and 80% of the time secured a win.

A mill deck is all about making your opponent run out of cards to draw. In Marvel Snap, different abilities of each card can allow you to forcefully make the opponent retreat due to a shortage of cards. Yondu is the top pick for players using Mill Deck strat. The deck includes:

The main strategy here is to reduce as many cards from the opponent as possible by using Yondu, Cable, and Mantis. Meanwhile, other cards such as Agent 13, Sentinel, and Moon Girl make sure you don’t run out of cards to draw yourself. Draw them when you get short of cards in hand. That way the opponent can’t use the same mill strategy on you.

And don’t worry about the lack of High-Power cards, Devil Dinosaur is a strong card for gaining points. America Chavez can be drawn at 6th turn, before that you can play the main strategy and then draw America Chavez depending on where the points are needed. The Collector will gain points for you throughout the game, especially with its combo with Moon Girl and Sentinel.

Use Uatu the Watcher if you plan to draw early cards on unrevealed locations, or else there is no need for it. Also, make sure you draw cards in the correct locations for double effects, even one wrong move can turn the match against you.

Cards such as Nova make sure your destroyed cards (if any) provide you advantages before they go. Armor is a solid defense card that saves the cards at the location from getting destroyed, basically taking all the privileges from your opponent to destroy your cards.

Yondu in Marvel Snap might seem like a weak character card, but that’s not the case. If you have read the guide completely, you should be aware of the correct use of Yondu. So what are you waiting for? Start a match in Marvel Snap with our suggested deck and make full use of Yondu.

Check out our detailed guide on Yellowjacket, another strong character card. Also, learn about the best ways to get cards in Marvel Snap.