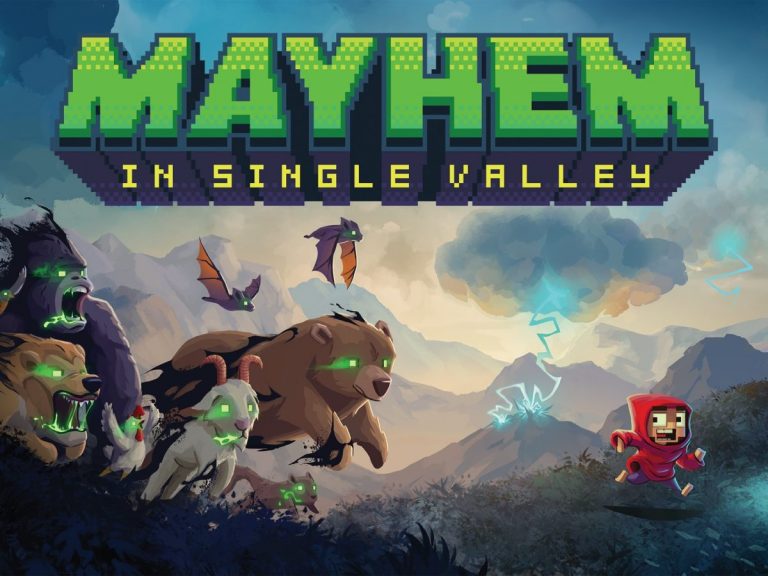 On Steam, developer Fluxscopic Ltd. give Mayhem in Single Valley this introduction: “In this fast-paced, puzzle-loaded action-adventure, you’ll juggle housework, zombie hordes, family dinners and radioactive squirrels! Oh, and you have to prevent the end of the world while keeping everyone from finding out it was all your fault.” Fast-paced is a bit of a stretch, but the rest of the description fits. The 1st chapter of this game released on Steam last year called Mayhem in Single Valley: Confessions. It’s free and is an excellent way of finding out if the rest of the game is worth your money.

Where Our Story Begins

The game begins with you playing a brief dream sequence. It involves rescuing clones falling from a plane before waking up in your bedroom. At this point, the art style shifts from 2D sidescroller to 3D sprite graphics. Now you have to do various chores in the house like lure your deadbeat dad with beer, as well as pick up and bin the dog’s constant diarrhoea before your skin melts off. That death is a clue of what you’ll be in for later.

Once the chores are done, Jack is about to leave home for college when suddenly he sees everything has gone to pot outside his home. Toxic chemicals from a truck have spilt into the water, causing any living creature that touches it to morph into a toxic monster. After that, a jogger shows up and for some reason, thinks Jack caused this problem since he can see our hero in the distance. Then he jogs off to report Jack and ruin his life. Why the jogger didn’t think to ask the truck driver what happened is a mystery. (Fluxscopic Ltd. seem to be taking a pot shot at the craziness cancel culture can stoop to).

An old lady also gets mauled by a mutant squirrel, which initially hints the story will have a darker tone. However, when Jack goes outside, we find out she’s fine. The squirrel then pickpockets Jack and escapes. So it’s up to Jack to journey through this crazy environment and save the world, restore his good name and his belongings.

Be Ready To Fail

When doing chores in the house, instructions are clear about what you have to do. Shortly after, when you venture into the imperfect world, you receive no instructions. The menu shows the controls but all you can do is avoid enemies as you explore. Meanwhile, the pause screen cycles through hints. These can be useful. However, the one saying to take Jack’s shoes off if he’s moving too fast is strange. I don’t think Fluxscopic Ltd. need to worry if players missed that warning. There are lots of items to pick up on the ground, each to distract a different kind of enemy. But they don’t help much.

The fact Jack cannot kill anything makes the game quite challenging. Not to mention the enemies are relentless. Especially the rabbits which you meet early on. They can quickly teleport over a short-range and kill you like they’re from Dragon Ball Z. Each type of enemy has a different attack pattern. And a mixture of different types can easily catch a player off guard. Jack dies in one hit unless he finds the occasional dustbin lid. Then it’s 2 hits. It’s better than nothing, I guess. As I hinted earlier, Jack moves very slow. So the faster way to travel is performing rolls. It felt like playing The Legend Of Zelda: Ocarina Of Time. Make sure to time these when close to enemies as there is a short delay after each roll. And you can bet foes will take advantage of that.

Throughout the world, there are collectables and derpy clones of Jack. Both are in places that will test your platforming skills. The clones are more important though, as the more you collect, the more upgrades you can unlock like faster running shoes and more backpack capacity. As for the collectables, they are just for bragging rights. Mayhem in Single Valley becomes more enjoyable after a few hours in. That’s when puzzles become more intricate as some involve using items you find like the slingshot and umbrella. It’s also due to the game increasing the challenge as it expects players to be more accustomed to the gameplay.

Environments and hazards change as you travel from, say a grassy to a desert-like area. Each new area introduces different enemies too. The numerous puzzles Jack encounters are not for the impatient, however. There are often points throughout your journey where you will be wholly bamboozled as to what you need to do. It took me a few hours to figure some of the puzzles out.

I did find a few issues that need to be fixed though. There is a section in the middle of the game where you fall in a pit if you backtrack enough. Unfortunately, there is no way to get out, so you need to load your last save. So save often. There was also a weird glitch where I had to buy the same upgrade for Jack’s shoes twice before upgrading them further. Minor grievances but they are worth mentioning.

For an indie title, the animated sprites look nice, but they’re not groundbreaking. I found the combination of the dull colour palette, slow gameplay moments and bit tune music left me feeling a little drained at times. What I do like is when you are high up, you can see details of the backdrop like other platforms with NPCs and enemies doing their animations. Animals move how you’d expect for the most part. Reflections and shadows are also done right.

In terms of audio, while the bit tune music and sound effects are nothing special in my opinion, they fit the theme of the game. They aren’t bad by any means. But I think more bit tune music genre variation would have given certain game moments more of an impact. For example: during the sad scene with the old man, a piano or violin solo could be playing. Or during a high adrenaline moment like avoiding the train, an electric guitar could be playing.

People who love old school, sprite-based, highly challenging games will most likely enjoy Mayhem in Single Valley. If the game released 10 years ago, it probably would have been hailed alongside countless highly rated modern retro titles like Super Meat Boy, Limbo, Fez and many others. Now in an arguably oversaturated market, it may fall under the radar for most of its target audience. And that’s a shame because while it isn’t revolutionary, it is still a quality title that is fun to play. It’s certainly worth the asking price of around $15. The fact this is only the 2nd game published by small indie developer Fluxscopic Ltd is a marvel in itself. I predict great things from this developer in the future.